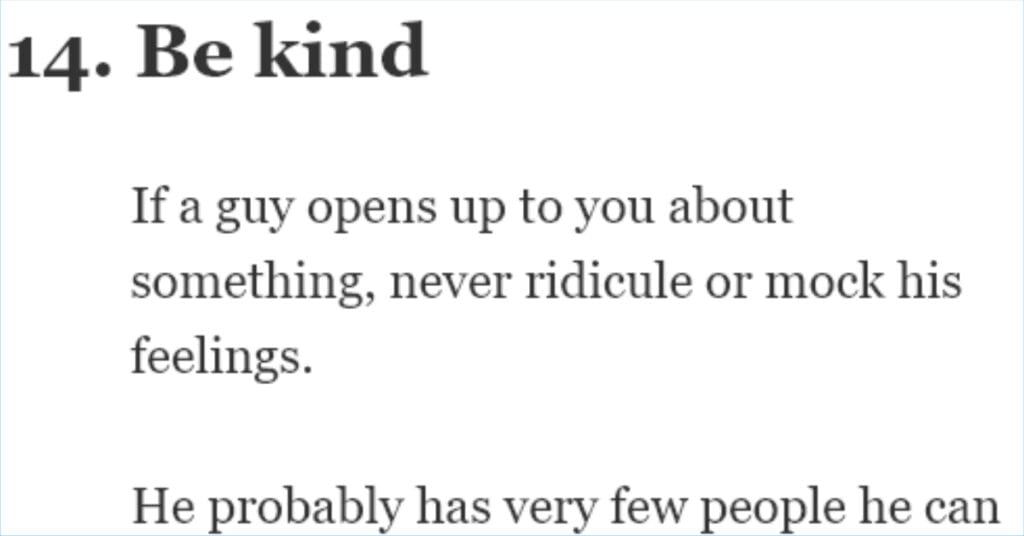 15 Pieces of Relationship Advice That Men Have for Women

What’s the secret to a happy relationship?

That wasn’t rhetorical, I was really asking. And so was this person on Reddit:

Men of Reddit: What is the best relationship advice can you give us women? from AskReddit

What wisdom have these dudes to dispense? Let’s look at some of the gems.

Holding your relationship hostage in every argument means you’re a s**t person with no real argument.

“Oh yea? Then why are we even together.”

“I guess you don’t care about our relationship then.”

People change for their own reasons. Don’t get into a relationship with someone hoping he will change. Unless he wants to, it won’t happen.

Remember that love is a choice, not a feeling. Someone who loves you is going to treat you in such a way that you feel loved. If you don’t feel it, and he has no interest in doing things to make you feel loved, he doesn’t love you.

He might have the hots for you, sure. That’s not love.

3. When we say we’re thinking about “nothing,” we mean it

I mean sometimes we are thinking, but it’s stuff like I wonder how much beans cost in Uruguay or who would win in a fight between a Rottweiler and a python

when you are with your SO put the f#@%ing phone down. nothing gets to me more than having a set time to be together and her constantly checking txts, FB, Instagram… when i am with my SO my phone is on silent and stays in my pocket so i can be focused and engaged with her.

5. Give the benefit of the doubt

If we say something seemingly offensive out of nowhere, ask what we mean instead of assuming the absolute f**king worst thing that could be interpreted.

If we compliment you, take the compliment and don’t say anything like,”No I’m ugly,” “No I’m fat,” were complimenting you for a reason and it’s not because “we have too.”

If you see a dude you like, go for it. I HATE the whole “only the man asks because that’s the masculine thing to do.” Nothing is hotter than a strong-a** woman who sees what she wants and takes it.

We enjoy a comfortable silence. Not every moment need be filled with meaningless talk.

That may not be a general thing as silences can be awkward for some.

Speaking for myself though, two people can enjoy one an others company in silence.

Many men don’t get the attention from women that women get from men. We’re expected to give flowers, arrange a date, initiate romantic evenings, etc.

Maybe not the flowers, but how about taking him out to dinner? Or a surprise date doing something he likes? Plan a romantic evening that centers on him instead of you.

In other words, let us know you like us with more than just words.

Men are tested enough in their lives; by family, employers, schools, other guys, and society in general.

Don’t add to this by conducting “tests” of your own.

There’s nothing worse than coming home to a “test” after a long day at work.

It seems fairly common for women (men also guilty) of trying to worm their way into a guy’s life as a strategy to move things forward.

Most guys seem to strongly dislike this. It can be very manipulative, and can seem to indicate we’ll lose a lot of freedom if we move forward.

See also, being very entitled to his time, especially if you just want us to be present while you watch TV (bonus negative points for being on your phone while you want us around.)

The more you can keep yourself content without our effort and time, the more attractive the relationship is.

12. Be a straight shooter

Are you hungry? Y/N

Do you want to get dinner? Y/N

If you don’t know ask “What are my options?”

Instead of I don’t know.

If you tell him “You pick” don’t complain about his choice.

Guys the same goes for you if you give the decision you have waived your vote. Try not to pick places they hate cause you like them. Bonus points if you choose a place they love and you do not. Best bet is pick a place you both like.

Don’t know if this has been said already, but most of us aren’t used to being emotionally available, so we may not open up.

When we do, it may all flood out, so if you do want your man to be emotionally open, try to make it so that it’s a manageable controlled flow rather than opening the flood gates all the way.

If a guy opens up to you about something, never ridicule or mock his feelings.

He probably has very few people he can be vulnerable with, and getting that rejection from a romantic partner is a huge blow.

15. We are also watching

We have been watching the same show/movie for the same amount of time as you have.

We don’t know more than you do.

Welp, that about wraps it up.