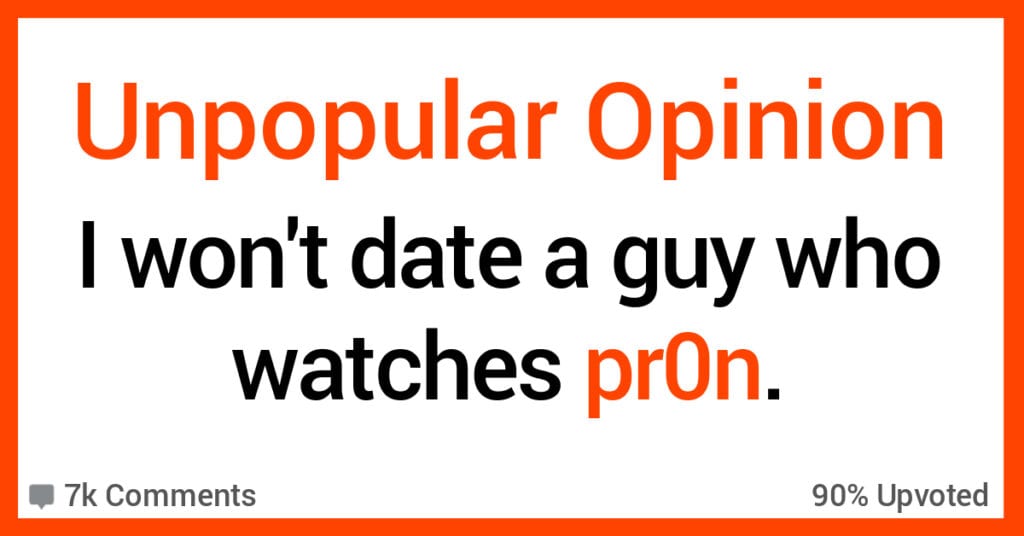 Hold onto your hats and your incognito modes, because today we’re diving into one of the most genuinely controversial things posted to Unpopular Opinions in a while.

And it’s all about…”adult entertainment.”

I don’t want to be in a relationship with someone if they watch pr0n.
Now don’t downvote this because you disagree, I know its an unpopular opinion, but I am genuinely uncomfortable by people watching pr0n while they’re in a relationship with me. It honestly feels like cheating. Why would you need to get sexual gratification somewhere else when I am literally right here willing to give you all the material you could ever want? Why do you need to get that from another woman?

If you’ve discussed it with your partner and you’re both ok with pr0n, thats cool, but I’ve been pressured by multiple people in the past to act like I’m ok with it, but I just never have been. Pr0n is something I’m highly uncomfortable with, it makes me feel jealous and betrayed and it makes me feel like I’m not good enough. Those should be valid emotions to feel, but people try to make it seem like its irrational to feel that way when I truly believe it isn’t.

I know a lot of people feel the same way as me, just know that its ok to set boundaries in your relationship because your feelings are just as valid as your partner’s. That goes for anything, really.

Turns out the people of Reddit have a LOT of thoughts and feelings about this.

You know what you want in a relationship, discussed it with your partner, came to an understanding that you both agree upon.

That’s exactly how it should be done.

2. But is this openness or just intimidation?

If my partner was adamant about me not watching p**n to the degree that they’d consider it cheating if I did, I would never in a million years share my deeper sexual desires with them.

Now, that’s just me personally and if you guys do communicate a lot and well there’s probably not an issue but I think this is the one thing you’re missing; As far as YOU know he doesn’t have sexual desires you wouldn’t be comfortable with, but you’ve taken such a hard stance on something far less consequential that it kind of implies that you’d have a negative reaction to, for example, very kinky s**.

This isn’t guaranteed or anything, but based on your post and what I’ve read of your responses that’s at least how I’d personally feel.

Bruh my ex didn’t want me to watch p**n back then and she only wanted to have s** every six months. My s** drive is off the f**king charts. I don’t want to force her soooo.

We all know how that end up lmaoo.

4. Some called red flag, no question.

Wtf is this thread. It’s very unhealthy to try and control people’s behaviour and s**ual expression. Your bf can’t control how you dress. Or who your friends are.

“But it makes me uncomfortable”

Yes that’s what possessiveness is.

This isn’t an unpopular opinion it’s an unhealthy one. You can’t encourage people to be so clingy and anxious. Your bf can only c** if he thinks of you? When someone is in a relationship they can literally only ever think of you?

Doomed to failure. Instead you need to learn how to cope with other people’s behaviours. You need to learn that love isn’t meant to be all encompassing. Your partner shouldn’t be the only person in the world.

I would really consider it a red flag in any relationship.

5. The term “thought policing” came up a lo.

I can get the p**n thing, but expecting to be able to police your partners thoughts? That’s borderline abusive.

It’s so unhealthy and OP really should examine why she feels so insecure in her relationships that other women can’t even take up any space in her partner’s private thoughts.

6. And then this person wrote the opposite diatribe.

Watching people in this thread absolutely bend over backwards to defend the idea of watching p**nography is insane to me.

How is it controlling to ask your partner to not watch other people f**king? Would your opinion be changed if OP’s partner were going to a friend’s house to watch two people f**k and bate in the corner? (I’m not trying to strawman; this is a genuine question because in my mind they are not very different from each other.) P**n has been proven time and time again to impact sexuality. Wanting your intimate relationship with your partner to progress at a natural pace is not controlling, imo.

People are bringing up the idea of “thought policing” in regards to OP’s partner’s masturbatory practices. While I can sort of understand arriving at that conclusion, I highly doubt OP is popping in every time their partner masturbates to be like “hey, make sure you’re thinking about me.” I’m pretty sure it was a one time conversation where she made her preferences known, and she trusts her partner to make private decisions in regards to that boundary.

I understand that people have s**ual needs, and that sometimes they just want to c**. I do not think that all people who use p**nography on a regular basis are bad people with ill intentions. However, when you’re in a long-term relationship with someone, I don’t think its controlling or insecure to ask your partner to not watch p**n. P**n is idealistic and largely plays at humanity’s base fantasies – aka, big breasts/penises, “ideal” looking genitalia, and overall extremely “attractive” people. I’d feel pretty insecure if my partner was consistently seeking sexual content from people who look very different from me.

Idk, maybe I’m the weird one here, but I agree with OP. I don’t think its controlling as long as it’s something that’s talked about early and with tact in a relationship. If you wouldn’t want to date somebody who wouldn’t want you watching p**n, that’s fine!! But defending p**n as a morally neutral thing is just pretty silly, imo. I just think it’s weird that people are accusing OP of being controlling and trying to change her opinion. There are plenty of valid reasons to dislike p**n, especially in a long term romantic relationship.

7. Is it insecurity? Or a reasonable expectation?

The only time a gf had a problem with p**n was when I was 18 and she was really insecure.

Chances are, because of how strict she is about this stuff, he’s just gonna lie to her about it. And honestly I think it’s perfectly harmless if he does. Those are his private thoughts after all, they don’t necessarily mean anything.

I couldn’t imagine asking someone to not watch it. To each their own though.

As long as you find someone who’s comfortable with your boundary, you are in the right mind.

9. Love the use of “unorthodox” here.

I don’t really think this is crazy, a little unorthodox, but I’m guess there are more people who’d prefer their significant other didn’t watch pr0n than do

10. There’s a broader question of the industry in general.

I agree with you, but in my case it goes beyond that. I just don’t like that people in general support this f**ked up industry… Luckily for me, both me and my boyfriend think like that, so it’s fine.

11. Most dissenters were caught up on one particular element.

Red f**king flag. I’d jump ship as soon as I heard that, and I don’t even remember the last time I watched p**n. I prefer reading it.

You don’t get to control your partners thoughts and trying to is abusive.

I don’t think it’s wrong to feel that way.

P**n is addictive in nature and twist people’s perceptions of what intimacy should be like.

I’m willing to say that it has destroyed more relationships than anyone is willing to admit.

I mean everyone has their own boundaries which is fine.

For me I don’t like the idea of my boyfriend looking at another girl’s nudes at all, and probably wouldn’t be comfortable with p**n unless we watched it together.

Tbh I think when people in relationships watch p**n is because they don’t want to make their partners uncomfortable by hounding them with their needs.

In fairness, one person is always gonna be h**nier than the other, and watching p**n instead of making your partner uncomfortable is actually pretty solid logic.

Give us your opinion in the comments.