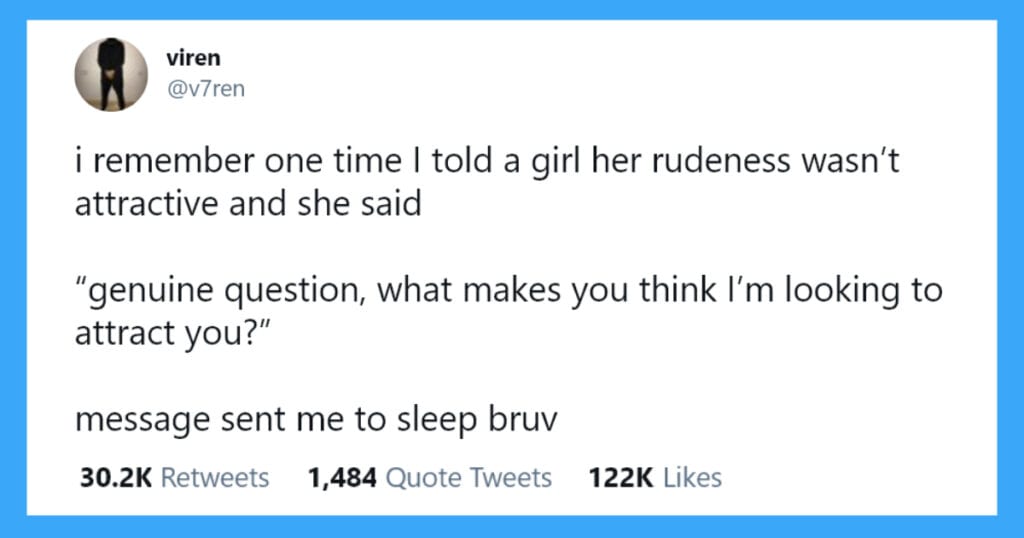 I can remember times in my life where I have been beyond obnoxious because somewhere along the line it got planted in my head that if I liked a girl and she wasn’t interested, I just had to keep going until she was, somehow.

I cringe when I think back on those younger days now. It’s downright bizarre how little most guys in our society have been brought up to recognize the true thoughts and feelings of the women around them.

And little moments like these, while they certainly don’t fix it all, can serve as vital wake up calls if we’re willing to pay attention.

Just stop doing this, across the board. There’s literally nothing good that can come of it.

Them: How old are you?
Me: 33.
Them: And you don’t have kids? Wow, time to get on that.
Me: I’ve had 7 miscarriages.
Them: *Looking incredibly uncomfortable*
Me: Annnnnnnnnd I hope we’ve learned a lesson in asking inappropriate personal questions.

“If your right eye causes you to stumble, pluck it out and throw it away from you.” – Matthew 5:29, World English Translation

My favorite bible story is when instead of telling women to dress modestly, Jesus tells his dudes to avoid lust by plucking their eyes out

Do you seriously mean to tell me I’m not the center of everyone’s universe?

“genuine question, what makes you think I’m looking to attract you?”

message sent me to sleep bruv

I remember the first time a female friend told me about this and I was horrified.

Man: I have to be so careful now because I’m afraid women will accuse me of sexual harassment.

Woman: Poor baby. I have to carry my keys laced through my fingers like Wolverine because I’m afraid men will rape me.

Learn the difference between incidents and epidemics.

I think if I were graded on the scale of expected female friendliness I’d be thought of as the meanest a** who ever lived.

Is she being rude, or have you been socially conditioned into believing that women should be warm, positive and friendly at all times and are uncomfortable when they don’t adhere to that behaviour?

When I was a kid I got thirsty and screamed like I was being murdered for half an hour in a crowded mall.

When people find out I have all sons, they often say, "at least the teen yrs will be easier, boys are less emotional than girls", so I guess my 14 yo having 45 min meltdown about putting his own plate in the dishwasher is just him loudly expressing his rational masculine logic.

4. Chairman of the bored

Look at that flex tho.

teacher: i need some strong boys to carry these chairs

me, a 9 year old girl, already sick of sexism: pic.twitter.com/iAq3y8eelM

3. You shot your shot

This is exactly what I’m talking about.

My teenage nephew told me he asked a girl out and she turned him down. I said, "You know what to do now, right?" He said, "I know I know keep trying" and I said "NO. LEAVE HER ALONE. She gave you an answer." He was shocked. NO ONE had told him that before. TEACH. YOUR. BOYS. https://t.co/yrxjNRnfk5

Same way single mothers are dragged for being the parents that stayed https://t.co/Uk6WRlDsWB

1. Down with the ship

Children first, sure, but why the rest of it?

dudes get mad at the “women and children first” rule like women and children made that rule. that’s some tough guy “I ain’t scared to die” bullshit you guys did to yourselves. if you don’t want to go down with the ship then learn how to cry in public you sociopaths.

Time to wake up and have a stretch, fellas.

What other observations would you add?