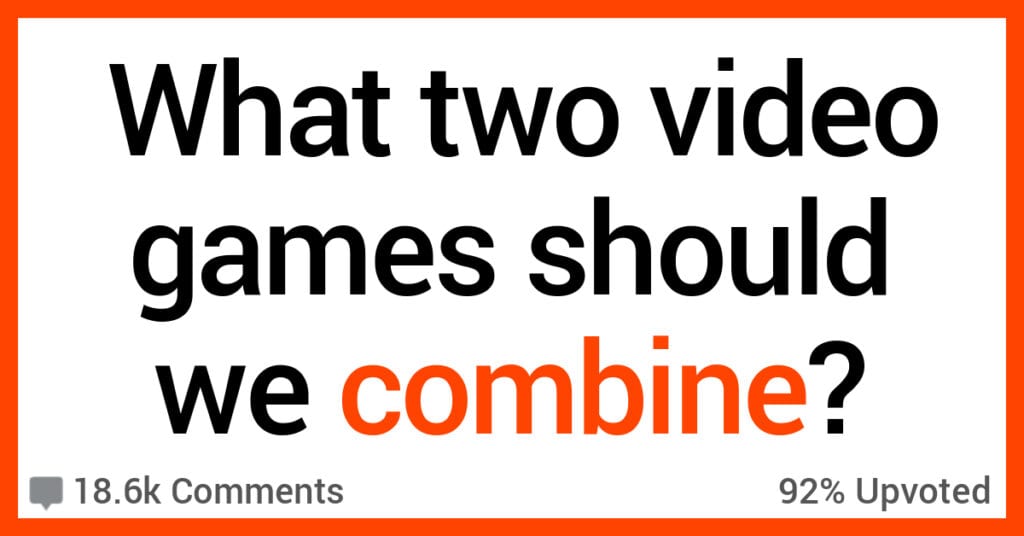 In 2020 I got more into video games than I ever had previously. I’m sure you can probably guess why. But I’ve never experienced anything quite like the imaginative combinations in this Reddit thread:

What two videogames would make a great game combined? from AskReddit

So what’s the next big AAA mashup? Let’s find out.

The mechanics in each game combined would make it so much fun.

I can totally imagine a colonial fantastic game, with amazing gunplay where your proficiency with your weapon actually mean something while being on an open world map.

You just play as a janitor in 80s Miami who has to clean up a bunch of brutal murder scenes.

imagine playing for 4000 hours just to get to endgame

Battlefield (or ARMA III) and Company of Heroes.

One player is the general, playing a typical RTS. But each of his units are actually players in an FPS. When he issues a move command, those players have a waypoint appear on their screen. If a player want grenades in their loadout, they send a request to the general player to unlock grenades in the tech tree.

Titanfall and no mans sky.

Just using a giant flame mech to fight a giant laser dinosaur just would be so cool.

Like having the family and generation aspects of Sims whilst also having the murder, sex and crime of GTA with optional missions.

I always wished the unmodded stardew game allowed me to automate EVERYTHING.

And satisfactory could use a little story

​Alternatively Fallout with anything stable and crash and bug free ;o)

12. Breath of the Pokemon

Pokémon & Breath of the Wild.

I don’t know if it would be better with a trainer as the player character or a Pokemon as the character you play as, but just imagine a massive open world where you could stumble across all the pokemon & just attack on command (no turn based, slow paced combat), and you can collect all types of items to boost stats & concoct potions & antidotes & all that.

I can’t describe my whole vision because there’s just so much that could be done with a game like that, but just imagine it.

Might not work for multiplayer, but as a single player marathon it would be beyond epic to battle throughout the eras

Age of Empires and Skyrim.

You get to pick your faction(Nord, Imperial, Dunmer, etc) build a city state and go to war with other factions but you also get to take control of a character and participate in the battles.

Seems like that last one would be in danger of getting slapped with the dreaded Adults Only rating. Might hurt sales.

What two video games would you combine if you could?