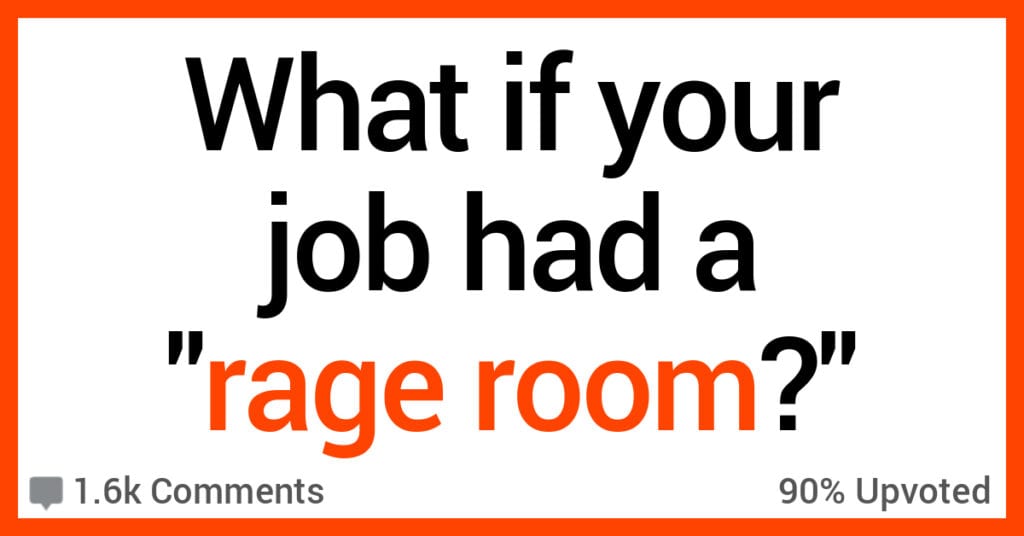 People Share Their Thoughts On Having A Rage Room At Work

Sometimes you get so frustrated with your job that you find yourself thinking “if this computer wasn’t literally my livelihood, if it wouldn’t cost me thousands of dollars to replace, I would throw it right out my window just to show the world what’s what.”

How do we deal with these impulses in a safer way? In a controlled way? One user on Reddit had a suggestion.

How would you feel if your job added a room where you can just go in and break shit? from AskReddit

What do we think of this? Let’s get some takes.

I’m a software developer and just yesterday me, my coworkers and my boss were seriously talking about getting a punching bag for the office.

I do that at my job.

I go in complete stranger’s homes, charging in with an axe, with almost no prior warning. Often in the middle of the night, even on weekends and holidays.

I sometimes have to smash the front door or a window just to get in.

First, I’ll drag the occupants out with great speed and force if I have to, and then deliver them to my coworkers in the van outside waiting to transport them to the receiving facility.

When I’m back inside, I absolutely will break sh*t with my axe if it is necessary for getting the job done. My most common targets are walls, ceilings and cabinetry.

Overall, firefighting is a pretty satisfying line of work.

I have this at my job sorta; two storage rooms full of furniture I need to destroy. It’s nice putting on some headphones and just beating stuff up, once all the screws have been removed.

The furniture keeps coming too, we get people coming in from other locations with overstuffed budgets, easy way to waste money is to redecorate their new offices. Then they get transferred to another location or office, someone else gets the old one with the way overpriced crappy new furniture and the cycle repeats.

The problem is cleaning up after and managing how full the dumpster gets.

In restaurants, not uncommon for waiters to go blow off a sh*tty table by going into the walk-in and punching the sh*t out of the uncut ribeye and briskets.

I don’t think I know any waiter who hasn’t done that multiple times in their career.

I’m self employed so I could do this any time I wanted.

I’d also have to pay for it all so…

If the situation is so bad there that people are so angry that a break room is required I would start looking for a new job immediately.

9. Rage against the machine.

Work in retail and you can snap hangers when your angry or break them over your knee or stick your face into a pile of jeans and scream.

The downside is that you will have to work in retail.

I kinda can do that already, if I wanted to.

Being in shipping/receiving we accumulate a lot of wooden skids (pallets) and eventually we have to bring excess to the wood dumpster.

I have a crowbar and a sledgehammer so I could smash the crap out of the skids prior to taking them to the dumpster.

Probably wouldn’t be too content with it, considering the fact that the company would have to get money from somewhere for the things that would be for breaking.

We have one, we call it our “Boom Room”.

It literally exists for our engineers to safely break and test prototypes or existing products.

My work already unintentionally has that..

Would feel great, if i just had a job.

Personally, I’m not sure if such a thing would help me ease my rage or just give me further anger issues. But I’d be willing to try it and find out.

What do you think of this idea?