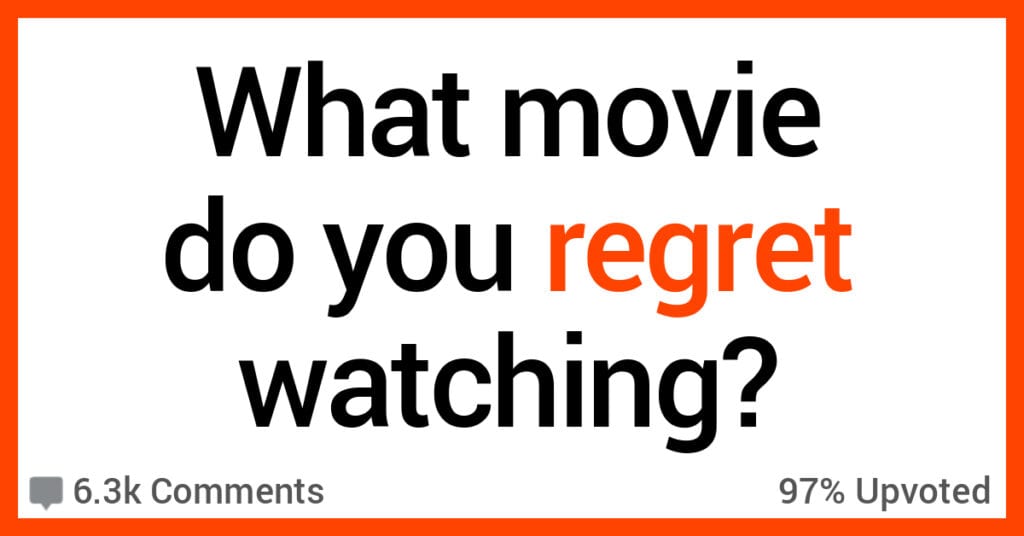 I’ve seen quite a few movies in my life – I even studied film for a minor in college. There are some flicks I love or admire with a passion, a few I hate, countless that I feel vaguely indifferent toward, but only one that I absolutely regret spending my time watching.

That movie is called Hostel and it was an early entry in what’s been dubbed the “torture p*rn” genre. There is nothing redeeming about that movie. It’s just bleak and disturbing and that’s all.

And it’s the first thing that came to my mind when I saw this Ask Reddit prompt:

What was your ‘shouldn’t have watched this’ movie? from AskReddit

Here are some other flicks people have their reasons for wishing they’d avoided. (Numbers provided are the year of release and its audience score on Rotten Tomatoes.)

There’s Something Wrong with Aunt Diane.

The one victim’s relative said it perfectly when she said (paraphrasing here) she could forgive Diane, but her husband she is still working on.

Sausage Party but mostly because it was seen with family.

Watched Eternal Sunshine of the Spotless Mind a few weeks after a hugely painful breakup.

This is not the way.

Dead Girl, a couple of teenage boys find a zombie chick strapped to a gurney in the basement of an abandoned insane asylum, so naturally one of them just starts r*ping her repeatedly.

That’s like 90% of the plot. It’s just damn unsettling.

That movie will crush your soul.

When I was 13 my dad took me to the movie theater. We started watching the movie The general’s daughter with John Travolta.

There is a horrifying r*pe scene with some super intense cinematography. During that scene I pleaded to my dad to leave. We did.

We then bought tickets to The Matrix which I f*cking loved.

Possibly Watership Down, I was too young and had no idea it wasn’t a family animation. Sh*t scarred me inside I’m sure. The song still makes me cry.

The Men Behind The Sun is one of the rare movies that legit disturbed me.

That one scene is the only scene from any movie that still haunts me to this day… 28 years after first seeing the movie.

I read Requiem For a Dream. The movie came out. I said, “why would anyone watch this movie? It’s horrific and will give you a bad feeling for a week or so.”

“But, but, Ellen Burstyn’s performance is amazing. You should just watch it. You already know what happens.”

Me: “Very well then, it can’t be any worse than the book.

As a kid: Disney’s Snow White.

I had nightmares about the witch for years.

Not a bad movie,quite the opposite in fact but I cry Every Single F*cking Time

Seen it in theaters. Dropped off my date and had to drive through country corn fields for half an hour.

To this day that movie freaks me out.

Grandma died, my bro decided to take me to the movies to cheer me up…

We went to see Pixar’s Coco…

Avatar The Last Airbender, It was the worst reboot ever made and I can’t stand a minute without physically cringing.

Some things just can’t be unseen.

What movie do you regret watching and why?