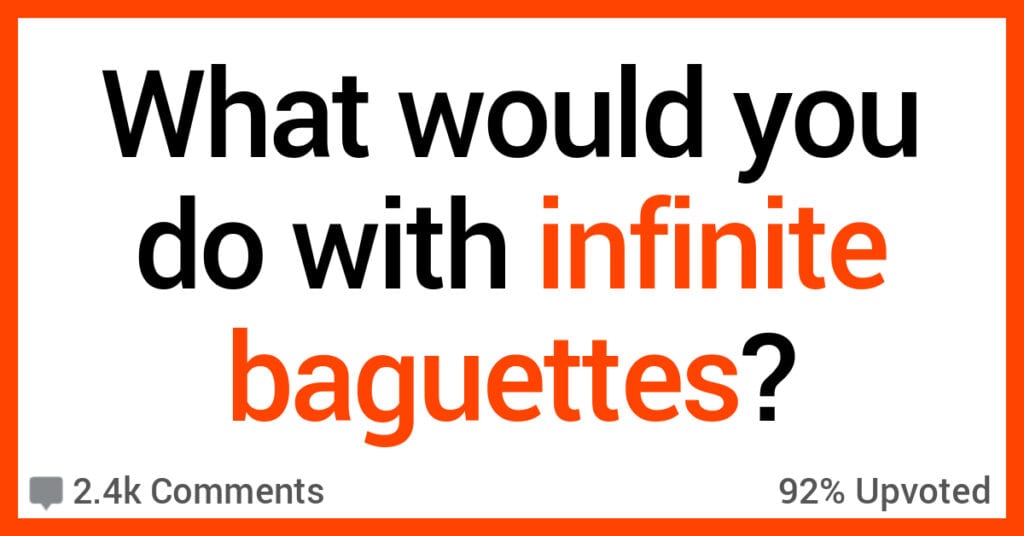 What Would You Do with Infinite Baguettes? The Possibilities Are Endless

I’ve had a go-to ice breaker for a while when I’m trying to stir up some lively conversation. It’s simple, it’s classic. It’s just:

“Which superpower would you choose – flight, or invisibility?”

Most people say flight, there’s inevitably discussions on the natures and limitations of the powers and how that would influence the decision, someone inevitably says invisibility and then immediately starts backtracking as they realize maybe that sounds creepy, it’s fun.

But I’ve found my replacement ice breaker, and it is this:

You have the power to spawn an infinite amount of baguettes. How would you use this power? from AskReddit

I don’t know what to say. But the people of Reddit do. Let’s check out some of their answers.

Does it have to be an infinite amount?

Because that would suck.

Your two choices would be do nothing, or destroy the known universe.

Death by baguette no less.

I will grow a Dali mustache, put on a black and white striped shirt and beret.

Then I will walk around in public places staring intently at random people.

When they uncomfortably start to look my way, I shout “BAGUETTE!” and summon one to hit them in the face then I twirl around and saunter away.

Whenever I see someone lying through their teeth on TV, spawn one in their *ss and mouth each.

5. This one is genuinely my favorite.

Anytime someone gives me trouble, I’d hand them a baguette and in a very stereotypical New York accent, say, “baguette about it!”

I would use it to keep people from sitting next to me anywhere.

“Is this seat taken?”

7. Construction would take a while.

Drop them on my neighbour’s head every time he makes noise or parks at my driveway.

Spawn them far from my house so pigeons wouldn’t come here.

I’d fill random lakes around the world at random times, becoming a topic of debate and conspiracy theories.

Until eventually the attacks will become larger and larger, people will begin to fear the baguette, but other will begin to view my power as that of God, slowly I’ll build a cult following leaving messages among my baguettes, waiting for the correct moment to strike, eventually countries will fall to the baguettes and entire nations will fear my power, until I claim my throne as the baguette overlord cementing my position by drowning all the world’s armies in a sea of baguettes, then as my final act of wrath I’ll create my own baguette meteor making all those who doubt me fall under my might, then after a long time of conquering I’ll simply stop no longer flourishing my power but instead seeing what will become.

Will they continue to follow me, inact their revenge or simply kill me and return all to normal, it won’t matter I’ve made my mark on all of human history for centuries to come, as the man who lived by the baguette and died by the baguette.

If someone tries to mug or rob me, I will stare them dead in the eye, and then use baguettes to lift myself into the air as I do an evil laugh.

I will then trap them in a prison of baguettes, which is getting smaller and smaller every second.

I will stare down at him and say “You think you can oppose ME!? Foolish mortal! I am a GOD!”

And I will do another evil laugh as the baguettes crush every bone in his body until there is nothing left.

First of all, do I fire them from my hands like lasers?

Because I would be the baguette blaster.

If not, I would be the breadbender.

Clearly, you should become a magician who performs exclusively with baguettes.

Maybe a little weird that the ultimate, infinitely moral and pragmatic bit of humanitarianism didn’t occur to us until that late in the list. Not sure what to make of that.

What’s your answer to this question?

Toss us your ideas in the comments.