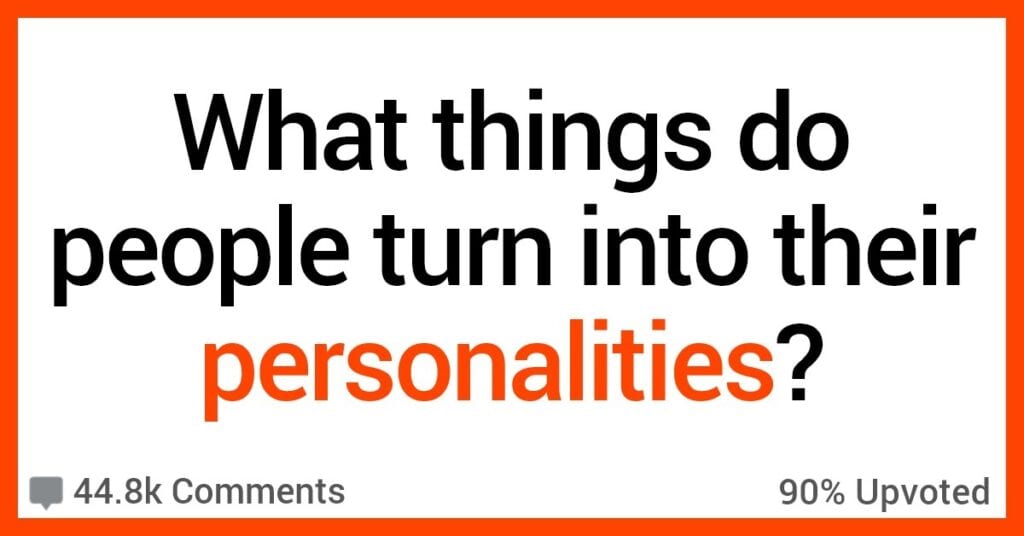 People Reveal the Annoying Things that Take Over Our Personalities

I can’t tell you how many times I’ve heard the phrase “______ is not a personality,” and it annoys me. I mean, granted, I’ve used it myself, but I’ve tried to be selective about when.

Because at a certain point, if you go around telling everyone that anything they say or do doesn’t count as part of their personality, then personalities just kinda don’t exist, right?

But the fact remains – some people get SO hung up on certain things that they just don’t seem to have much of an existence outside of them, and that’s when stuff gets annoying/worrying.

What’s something that people turn into their whole personality? from AskReddit

So, what are some red flags? Let’s ask Reddit.

My Texas high school had a British club. I’m actually a British citizen, so I tried to join.

Those people were nuts. They made Doctor Who and Sherlock their whole personalities.

My ex once asked my to take the test. I got the ESFJ result and thought “Yeah, that kinda makes sense. But whatever.”

She went off on me, telling me I’m an INTJ and she would know because she was one.

I asked her if she wanted me to find out what flavor lifesaver I was next. That relationship did not last long.

I’ve always had very poor health, and in high school and early college, as my conditions worsened, I didn’t like that I couldn’t live a “normal” life, so I kind of leaned into it.

Always joked about how sickly I was while secretly hating myself for not being able to “keep up” with my peers. Some maturing and some guidance from my mother has helped me to learn that, yes, poor health sucks, and yes, I can’t always do the things that healthy people can, but that doesn’t have to control my identity.

Doing far better now, learning what my true limits are and how to work with them! 😊

I started trading on Robinhood here and there a few years ago just for fun.

Eventually a few friends started to as well and for a few months I started to understand what it was like to be into sports. Like we had our favorites and could brag on wins over drinks. It was pretty fun.

But then they started to get really involved and I’m still more casual. Now these conversations are starting to get tedious. :-/

It never fails every year that Jeep owners descend on the cruises. They park, open hoods, rip around revving engines… it’s a stock Jeep off the lot my guy, you’re not turning heads.

Nobody cares you smoked 3 oz last week. Nobody cares about your 2g dabs. Inhaling anything besides air into your lungs harms them, it cant fix every problem.

Just shut up, roll up and enjoy it like the rest of us.

“Thanks for your concern, haha, but I know [INSERT HUSTLE] isn’t a pyramid scheme because he specifically told me that it wasn’t one, so I’m pretty sure I’m good lol”

paraphrased message a friend actually sent after my gentle inquiring into his recent activity (spoiler alert: it was a pyramid scheme).

My brother turned my daughters 11th birthday party into a family cryptomercial, going so far as to get my mother to invest 2k, right before the huge dip.

It’s all he talked about up until the market dropped. Now he’s much quieter.

It seems like people are being driven to shape their identity around their political leanings, rather than the other way around.

It’s to the point where you can’t really engage in open discussion of political ideas without someone feeling personally attacked since so much of their identity is invested in their “team”.

Sometimes my gf and I will hang with her work friends, who are all nice and stuff, but all they talk about is work 90% of the time we hang. Most of the time I’m just sitting there trying to understand wtf they’re even talking about (I don’t work in the same field) or just d**k around on my phone.

They’ve even called themselves out before many times, realizing how boring it must be for me (and whoever else is there that doesn’t work there). I’m wondering if they’ll all still be friends once they all quit and move on with their lives.

It seems like they don’t really have much in common besides the fact that they all hate their jobs and their boss/managers.

You went Kayaking through the swamps of afkhabar? pfft, dude, those are the tourist swamps.

The real swamps are in efkhabr, but you have to be invited there by the local inganapni tribe like I was. check out the tattoo they gave me.

I used to work in a large office and I swear that 90% of the dudes from the ages 23-35 listened to Joe Rogan.

If it was a white dude that number jumped to 98%.

You could literally pop your head over the cubicle wall and hear three different guys talking about hunting or mma or some s**t that was on the last podcast episode.

I don’t think I’ve ever met someone that owns horses who’s entire existence wasn’t solely revolved around the fact that they own horses. (I’ve met 3).

i’ve always been a runner ever since i was a kid but started training for marathons in my 30s and when i started running long distances, it definitely took up a fair part of my personality.

i became very fixated on it.

I’d keep going, but listing things is not a personality.

What hang up annoys you the most?