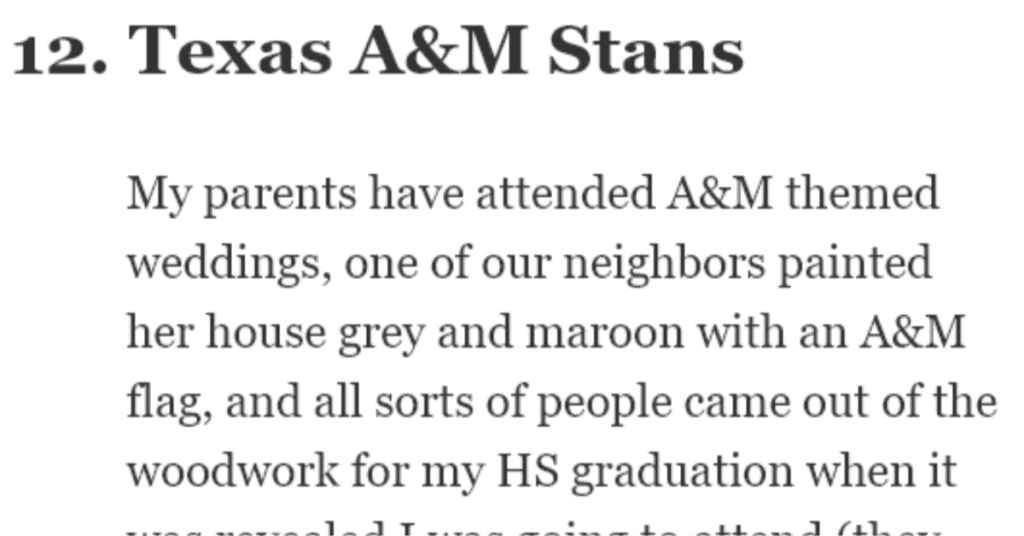 15 Things People Might Take Just a Little Too Seriously

You ever run into one of those people who’s so closely associated with their biggest hobby that it actually becomes their name?

Like “Oh, that’s Mustang John” or “Watch out for Jimmy Two-Phones, he’ll call ya all day.”

Ok, those were terrible examples but you know what I mean. And if you don’t, read on

What’s something that people turn into their whole personality? from AskReddit

See, a lot of people let one thing just totally overtake them, and the results can vary from annoying to tragic. Just look at some of these examples from Reddit.

This speaks to me about why I avoid ever deliberately going on Facebook to just scroll through my feed. I don’t consider myself some sort of meme connoisseur or meme elitist or anything, but for some reason I still get irrationally bothered by people using bad memes or using memes wrong, and I don’t want to see people I know IRL and just get flashbacks of their s**t memes.

Then when that happens I think to myself “Wow, I really am some sort of meme sh**lord, huh? I can’t even focus on talking to this person because I’m just thinking about how much I hate their Facebook posts”.

When I look in the mirror, I can’t help but say “戦い, 戦い” (which means fight, fight in american.)

I grew my hair out long because I don’t care so now I have to wear it in a bun and I don’t care what people think so shut f**k up Hange!

I always leave an open wound on my hand, and go out of my way to show it to everyone so they are reminded that I am in control.

When I see dogs being taken on walks I get mad at them for not being free like I am.

I can’t have s** with my girlfriend anymore without forcing her to dress up as Mikasa or Historia, both of whom remind me of Armin.

When I order fast food, I refuse to call them french fries and insist on calling them freedom fries. I just keep moving forward, until my enemies are destroyed. /s

having to literally explain to people that it’s an MLM is so frustrating. They prey on small towns, create “nutrition shops” that sell $9 shakes when it’s literally just Herbalife and is helping the owner barely break even.

Happened in my small town, then out of nowhere 3 other “branches” popped up in the revolving small towns. (Which basically means the owner conned 3 more into joining so that they can get their profit).

There’s a documentary out there called like One in a Million or something that breaks down the pyramid and how little people at the bottom are actually making. They also show that the shakes are nothing more than liquid laxative, so of COURSE you’re losing weight.

Some fans are kinda scary. Their whole life becomes dedication to a celebrity’s.

And it’s not just their personality, they make everything around them about that person. Posters, music, merchandise, weird things bought on the internet—supposedly with relation to the subject of their obsession—and so on.

I can’t imagine being close to somebody before and after their transition into that life. It seems like it’d be scary…

I’m Norwegian. When I say that, a shocking amount of people assume that I’m American with Norwegian heritage.

There are so many americans making their «viking heritage» their whole personality, butchering the norse faith and fighting with actual Norwegians over the correct way to make a traditional dish and the spelling and usage of «skål» (cheers).

It’s so f**king horrible to watch. It’s like being mocked.

I went to someone’s house once who was obsessed with Disney. I wasn’t warned of how obsessed they were and literally had to stop in the middle of the room because I was gaping at the sheer volume of Disney stuff they had.

Every inch of the walls and surfaces was covered in Disney paraphernalia.

The sad/weird thing was that these were extremely wealthy people so they had things like original Disney cels from the 30-40s and actual valuable objects just crammed next to some tacky plastic plates.

Literally half the tinder profiles contain something about the Office… both genders too.

I have a friend who does this and it’s really f**king exhausting.

Some things are really popular because they’re just that good.

If they can’t appreciate anything mainstream it just makes me think they’re just as close-minded as the people they think they’re making a jab at.

I met a couple influencers traveling, took em on a tour around a cool town. They were totally detached and on their phones/posing for photos, not at all looking at the sights or listening to what I was saying. They stayed for like an hour and then asked to leave… Didn’t see them smile once

Later I saw posts on their blogs about the wonder of this town, with staged, smiling photos of them “spending the day there” and “enjoying getting to know its people and history.”

That experience ruined influencers for me lol, I couldn’t live faking joy like that.

Some people just make it their whole life and I don’t get it. Work to live, don’t live to work.

My workplace’s normal business hours are 8:30 – 5:00, but I’m constantly hearing people say s**t like “when I was working on it this weekend” or talk about how they work so late, it makes me cringe.

Those people who brag about not being able to properly function without coffee like it’s a good thing that they’re so addicted to coffee they have to rely on it to live?

My parents have attended A&M themed weddings, one of our neighbors painted her house grey and maroon with an A&M flag, and all sorts of people came out of the woodwork for my HS graduation when it was revealed I was going to attend (they offered me a big scholarship, otherwise it wouldn’t have even been on my radar).

I lived in Georgia my whole life up to that point, and had no idea the absolute crazy I was getting myself into haa

I am a Christian, but there are so many other religious people who think that it is 100% okay to impede on the personal live’s of other people, and then resort to saying, “You’re going to Hell for thinking that way/ for doing this.”

Let people live the way they want to without you breathing down their throats, please.

This isn’t supposed to be a diss so don’t take it that way.

I work in mental health and realise that it is a major issue.

But I see more and more people turn their whole life into it, and blame everything in their lives on it without working on it.

don’t come for me, I’m not talking about everyone that games.

I’m talking about the people watching obnoxious gaming YouTubers and turning their personality into them. The youtubers are acting that way to get money and get an audience, in front of a camera not all the time. I enjoy watching gaming videos (sapnap, Wilbur soot) and I think their nice, but some are just so obnoxious I can’t stand them.

I won’t name them but I think we all know what I’m referring to.

Now I gotta go do the thing that constitutes most of my personality: take a nap.

What trait do you think people take too far?