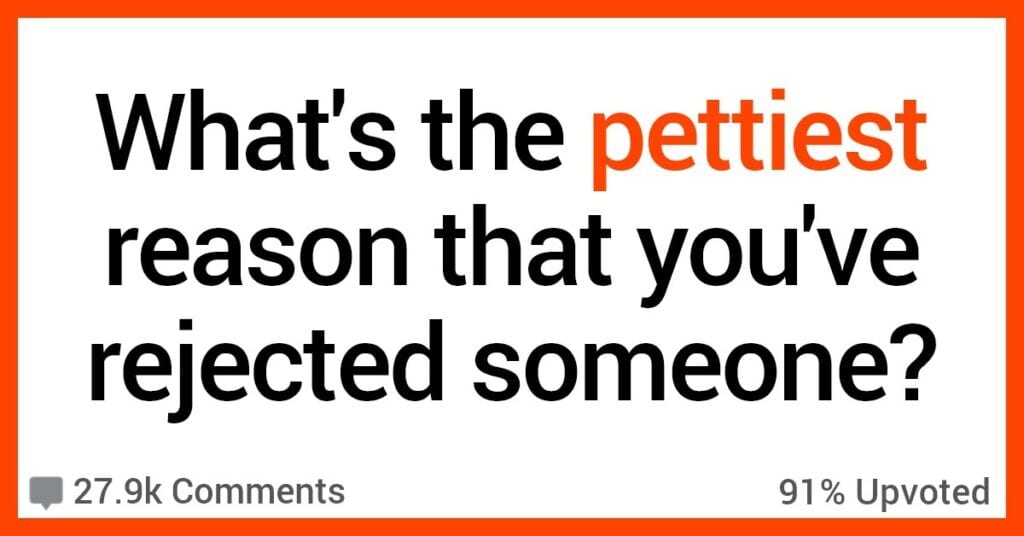 We’re all just out here looking for love, and sometimes it can sure seem elusive.

The reason things don’t work out can be a big thing, or a small thing, or a weird thing, or some combination thereof.

And small and weird is what we’re focused on today.

What’s the pettiest reason you’ve rejected someone? from AskReddit

So, what was the odd straw that broke the relationship’s back? Let’s hear some tales from Reddit.

I have a friend who has a whole list of petty reasons she’s rejected guys:

• He cut his spaghetti before eating it

• He cut his hair too short

• He dropped something and said “whoopsie”

• After watching her favorite movie, Ever After, for the first time he said it was “just ok”

And then once a month she cries about how she’s still single.

Was chatting to a girl online. She seemed very up for it – she asked to meet up, set a time and place. An hour before she says “shoot forgot to ask, how tall are you?” When I said 5,11 she just said “sorry, one inch off” and that was that!

Feel I dodged a bullet tbh

I once rejected someone who didn’t believe in dinosaurs.

He had the worst spelling, to the point it just made me cringe.

We were flirting over text and he said “I bet youre vergina is sexy” and I just couldn’t.

We went bowling and she started saying the bowling ball was hurting her fingers.

She was convinced that there were bugs inside the bowling ball biting her fingers and that was the reason for her pain.

My ex’s name was Simone. She was studying business administration and had a horse.

We broke up after she f**ked another dude.

I got over it, and met another girl. Her name was Simone. She was studying business administration and had a horse.

She smelled funny. Not bad. It clearly wasn’t a case of not washing or anything like that.

She just smelled… Weird. Couldn’t get over it.

I was the one rejected, but the reason I was given was “I’ve been rejected a lot, I want to know what it feels like to reject someone.”

Their best friend told me they were interested in me too

My perpetually single friend has turned rejecting people into a bit of a sport. I’ll Tinder for her, which is all sorts of amusing, but one day, I had actually met someone for lunch and thought “here’s someone that’s kind of her type, I wonder if she’d be interested!”

I ended up pulling up his website and showing her some pictures of the guy. We get to about the sixth photo in, of two of his cats, in a treehouse. She explains “his cats look bratty.”

Not dating, but I had a friend with whom I saw all major Marvel films while they were in theaters, all the way to Infinity War.

When I asked if he wanted to go see Endgame, he said he saw it with some other friends and didn’t feel like going again.

This was never a tradition we explicitly made, but I still felt a bit betrayed. A ten year journey and he ditched me at the last mile.

The tip of her nose would faintly wiggle up and down when she talked.

I could barely pay attention to what she was saying because I was fixated on her wiggling nose.

We spent our first date browsing various record shops in Manhattan and Greenwich Village. I took him to my favorite ones.

I told him what Elton John album I thought was best. He disagreed and was adamant I was dead wrong.

He was going to a party at his brother’s after and didn’t believe in subways (as his dad had died in 9/11). The party was 100 blocks away in Brooklyn. Decided to walk him to the party despite having mild asthma and severe post nasal drip.

Once there at the door he decided it wouldn’t work out because he couldn’t put our differences aside. His last words were, “Do you really believe Honky Chateau is his best work?” Of course I do. He had this horrified disgusted face on and said, “Yeah, no. That’s just wrong. Not gonna work out since you have poor taste.”

Literally got rejected over Honky Chateau, but it’s okay. My FIL thinks that album is the hottest s**t.

I have a friend who is the king of breaking up with women for petty reasons like this.

I think he may have rejected a girl for her teeth size.

He left a perfectly beautiful and sweet woman once because her skin was too pale.

Another time it was a potential mate’s feet that bothered him.

I ran into him at a brewery and he was on a date with a beautiful girl that was dark skinned and dark haired (so the pale issue wouldn’t be a thing) and as I’m standing at their table chatting I notice her hand wraps almost completely around her pint glass. Very large hands for a woman. Wouldn’t be a big deal for me, but I knew she was doomed in regards to a relationship with this guy.

I wasn’t with a guy yet, but really liked him.

I was super put off and lost interest when he asked ‘why don’t we just sit on the toilet and let it all out at once instead of wearing pads’ and then REFUSED to listen to my explanation of how periods actually work because it was ‘gross’.

Like, I can forgive ignorance to some extent, but I can’t forgive refusal to learn

She moaned like I was butchering her with a knife no matter what I did when having s**.

Slow, fast, it sounded super fake and was a huge turnoff. Even tried to go off rhythm to test her… screams all the way.

15. Dude that’s what a microwave is for

His mum went away for a week and he reheated a lasagne, took a slice out and put it back in the fridge.

He did this every night, reheating the entire lasagne each time.

Surprisingly he didn’t get food poisoning, but I just couldn’t handle that. He was so nice, but just not the smartest guy.

Best of luck out there, lonely hearts!

What’s the pettiest reason you’ve rejected someone / been rejected?

Tell us the story in the comments.