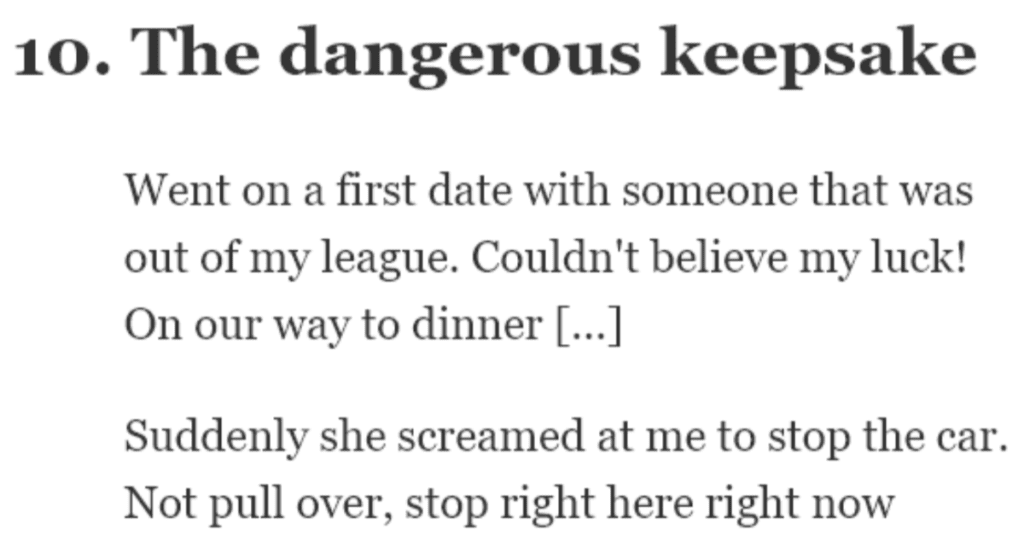 Do you remember that episode of Scrubs where JD is gonna break up with a woman because instead of laughing at anything she just says “that’s so funny?”

I felt that. When I watched that, I felt that. I don’t know how I could deal with be with a person who didn’t laugh.

But how petty a reason is too petty? Let’s go to Reddit to find out.

What’s the pettiest reason you’ve rejected someone? from AskReddit

Here are some folks who are looking for love in all the wrong places.

I broke up with my girlfriend in eighth grade because she called me four times a day when we didn’t have cell phones.

I got tired of talking on the phone and broke it off.

This is awful but it was her laugh. I never told her obviously because someone’s laugh is a representation of when they are happiest.

So shallow as she was pretty awesome.

I was rejected because I didn’t like the taste of his preferred beer.

That was it, I wasn’t asking him to stop drinking it – I just didn’t personally want to drink it. We were about to order another round, he asked if I knew the one he had just had, and offered me a taste. I gladly accepted because I try to be open to tasting new things.

I just said I found it a little too hoppy for my tastes and I was happy to stick with what I was drinking. I wasn’t rude, I said it was nice, but a little hoppy for me. His face dropped, it was almost comical. He then said something along the lines that he had changed his mind and he had better get home.

That was the end of that first date. As in he literally decided he no longer wanted another round. The date was over. He had blocked me on Facebook before I walked the 100m to the bus stop.

Pretty sure I dodged a bullet there.

She was texting me to tell me about her standards for men which were pretty high.

But I didn’t like all the spelling mistakes she was making.

Not meant as a make-out kiss that was a quick kiss. Just opened his mouth and smashed his face into mine then pulled back. Ew

I could not stand her smell. No, she didn’t stink. But it was that “immune system does not match”- smell.

I just could not get turned on, and the kisses felt like paper.

Luckily, we handled this like grown-ups and are still friends.

Dated a guy who was color blind.

He’d argue with me about the color blue-green even if I was the only person in the relationship who could actually SEE blue-green!!

Dude was super sweet, had a lot of good qualities.

He was a plumber and casually admitted to me that sometimes he will bite/clean his nails after work and taste the remnants of what he touched that day.

I could not get over that and had to move on.

It wasn’t just about her nose, or the way she spoke.. but something about the combination of the two that I couldn’t get past.

All things considered, she dodged a bullet big time

Went on a first date with someone that was out of my league. Couldn’t believe my luck! On our way to dinner […]

Suddenly she screamed at me to stop the car. Not pull over, stop right here right now immediately in the suicide lane of a 4 lane major road. Just before I came to a complete stop in the middle of this busy road, she opened the passenger door and tried to jump out. If a cop saw all this it probably looked like she was escaping a kidnapping.

She jumped out of the car and played Frogger across two lanes of traffic, and I sat there stunned with my passenger door hanging open into traffic. A few seconds later, she came running back with something under her arm. I couldn’t see what it was in the mirror. She had a huge smile on her face and as she climbed back into the car she squealed with delight as she showed me what it was.

She said it was to commemorate our first date, and that we could share custody of it. I could have it first.

That was our first and last date.

I broke things off once because of the size of her teeth.

They were tiny compared to the size of her mouth. It shouldn’t have been an issue, but it creeped me out. I don’t know why, but it was one of those things that I couldn’t ignore and gradually became the only thing I could see. Grown woman with a mouth full of baby teeth… just weird

She would call me every single day like 2 minutes after I clocked out from work. I asked her several times to just give me an hour before she called. Let me get home first. I had a 45 minute drive home that was my decompression time, blast the radio and get over the days bs.

She couldn’t do it. That hour was to much to ask “but I couldn’t wait to hear your voice!” So I broke it off. My friends tell me that’s incredibly petty. I feel like she can’t respect simple boundaries and it will be a big problem later.

He said he never washed his butt because it would be “gay” to touch his own a**.

After that moment all I ever saw when I looked at him was poop.

He was literally a walking turd.

Never dropped someone so fast in all my life.

He didn’t have soap at his apt.

Even by the 3rd date, no soap anywhere at his place, no dish soap even.

He never smelled or anything, but just weirded me out.

I had an ex who i asked to put a pizza in the oven, and he did. I took a bite out of it when it was done and realised he’d left the plastic film on and it’d melted into the pizza (i thought it was just weird cheese at first.) He then blamed me for making him cook “poor people food” that he didn’t know how to cook, cos his mum apparently didn’t buy that stuff.

His mum did buy that stuff cos id talked to her about food recommendations before, the reason he didn’t know is cos his mum cooks every meal for him and he never sees it before its finished 😓 he assumed she makes everything from scratch.

Well, that’s a whole lot of yikes from me.

What’s the pettiest reason you’ve rejected someone / been rejected?