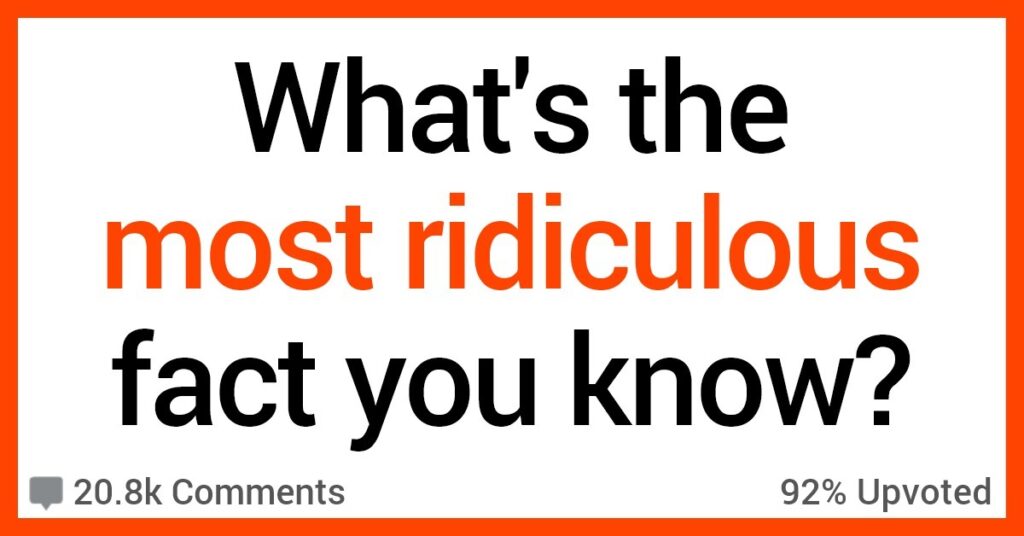 People Reveal the Most Ridiculous Facts They Know

If you’re a fan of useless trivia, get ready to lose your entire mind.

This thread on Reddit turned out to be an absolute goldmine of things that are sure to send you down an internet rabbit hole for the next several hours.

What’s the most ridiculous fact you know? from AskReddit

Full disclosure: we haven’t verified any of these, but the mere possibility has us googling like crazy.

1. The Novel Without an E

Mozart wrote the “Night Queen” aria so his sister-in-law could show off.

The piece is so good that it is included in a collection of music from Earth on both the Voyager 1 and Voyager 2 spacecraft.

3. Invasion of the Rabbits

Australia had rabbits (not previously inhabited) brought to the continent and due to no real predator present, the continent began to be taken over by rabbits.

There are now three rabbit fences that literally forced them into a corner of the continent.

4. Cat Got Your Throat

I’ve remembered this since I had a Snapple over I dunno ten yrs ago.

Snapple fact 777: cat have two sets of vocal cords, one for meowing and one for purring.

Thank you for letting me get that out

Your eyes have a different immune system than the rest of your body.

If they knew about each other, your eyes would basically start dissolving, as your immune system attacks your own eyes.

Fear not, your brain won’t let that happen.

That when the Milky Way and Andromeda collide, even though the both have hundreds of billions of stars, the likelihood of any 2 stars colliding is astronomically low.

Everything is unimaginably far apart.

the singer of ‘Peanut Butter Jelly Time’ died in an 11 hour police standoff during which his brother-in-law, Snoop Dogg, attempted to calm him down and convince him to surrender.

The eruption of Mount Krakatoa was the loudest sound ever recorded.

Imagine an explosion so big in New York that Los Angeles hears it.

It produced seismic ripples through the earth that were picked up on devices, and showed that the ripples of the explosion circumnavigated the earth several times.

The decibels were so high at the point of the explosion that just the sound was lethal within a few miles and is a decibel level that liquifies solidified concrete.

A lot of the times, in ancient Egypt, scribes would use a logographic symbol after some words they wrote to clarify what they mean.

All Clownfish are Born male.

The Dominant Clown changes to female.

When the female dies the next dominant male steps up into motherhood.

Crisipo, The greatest figure of the Stoic philosophers in ancient Greece, died telling his own joke.

He saw a donkey eating some figs.

He Say, now give him a glass of wine to make it a complete meal.

He gave the donkey wine and got him drunk, he laughed so hard after that had a heart attack and died.

Jerry Parr was the Secret Service agent who grabbed President Ronald Reagan and threw him in the car when John Hinckley shot the President.

He covered Reagan with his body on the way to the hospital and is credited with heroically saving Reagan’s life.

The type they are is the first letter sideways on their back.

The spikes on the tail of the stegosaurus had no common name until The Far Side did a cartoon referencing it as the “Thagomizer” (after the late Thag Simmons).

The name stuck. That is really what it is called.

A mnemonic device for remembering the order of British peerage is Do Men Ever Visit Boston (Duke, Marquis, Earl, Viscount, Baron).

No, I’m not British and my knowledge of this is no more useful to me than British peerage is to the British.

What useless trivia do you know?