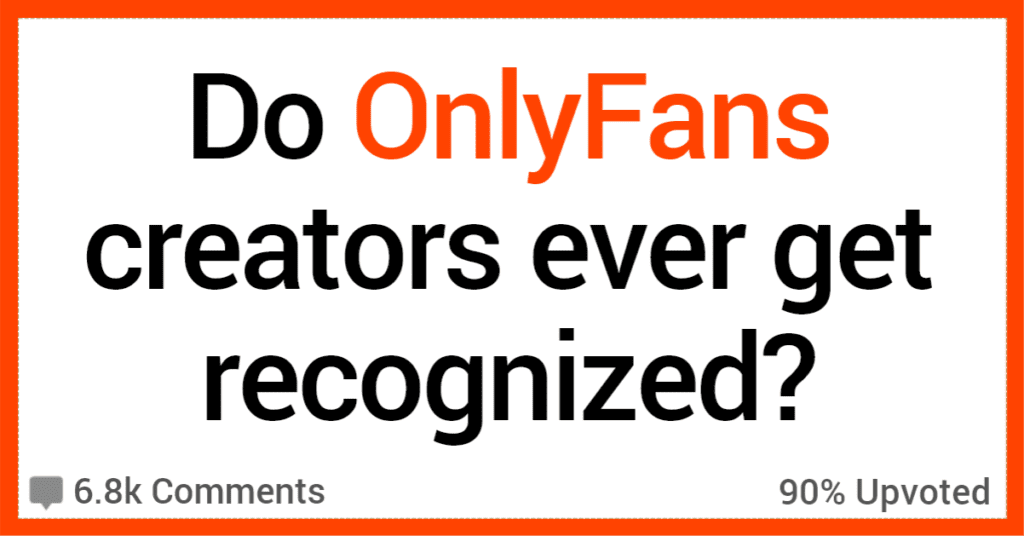 OnlyFans is a site where users can pay to subscribe to particular content creators – largely for adult content. Or so I’m told, anyway. I don’t have an account. Not because I’m above it, just because I don’t have any money.

Anyway, that and a lot of related sites have been a huge boon for some people. But you have to wonder, as this Redditor did…

People with OnlyFans, have you ever been randomly recognized in public? If so, what happened? from AskReddit

So, what’s the deal when the feel becomes real? Let’s see what people had to say.

Obligatory not me, but my cousin-in-law works in p**n.

We all went out to dinner and this kid who couldn’t have been more than 20 years old was at the restaurant with his mom. He keeps eyeing my cousin all shy and doesn’t really know what to say, probably didn’t want to mention in front of his mom where he recognized her from.

Eventually cousin and the mom were in the bathroom, mom nicely asked cousin to take a picture with her kid and she agreed. If only mom knew lmao.

2. A blessing in disguise?

My wife knew a coworker who was fired for filming herself f**gering herself on a vacant hospital bed for her OF account.

Someone saw her work badge and reported her.

When everyone found out, over half of the staff knew who she was and some of them signed up to her OF.

I asked if she knew or not (since she was an early childhood teacher and it could’ve cost her her career) and she made out it wasn’t her.

It had her full face and her tattoos with some of her stuff in the background though, so I think she knew the video I was talking about and got embarrassed or something. We slowly stopped talking after that.

I remember going through my history about a few weeks later and the video was taken down.

Yes, I was recognized at a modeling event I worked.

The guy was also a model.

I had the misfortune of working next to him the entire time where he BEGGED me to pay me to watch him m**turbate in real life.

5. The best part of waking up

I have been recognized one time by a guy at my favorite coffee shop.

He was actually very nice and not creepy which was awesome!

I did send him a picture of my t**s with a mug in front as a joke later.

6. The phantom OF conspiracy

Well, this is indirectly related, but I once made a joke at work about being busy over the weekend responding to all my OF “followers.” (I included the air quotes.)

The joke is that I’m a 53-year old male who has never been called handsome, so obviously, I’d be responding to women that I follow. But…apparently, a few people at work thought it was funny/absurd that I should have an OF account (as in, posting my pics and videos) and have been trying to find my account ever since.

I responded to the question because they told some clients that I had an OF account, and the clients complained to my boss, who brought me into his office to reprimand me. When I explained that I don’t have an account, didn’t tell anyone that I did, and only a few people believe that I do, I was happily told to wait while he brought in the ones who DID tell the clients. Let me tell you, that was a pretty awesome moment. They actually tried to convince our boss that I was lying, and to check my phone.

Supposing it’s like seeing someone you know at an adult shop.

You both know why you’re there, yet you can’t tell anyone you saw the other there without explaining why you were there.

Because everyone gets h**ny sometimes.

I’ve never actually been recognized, but I’ve had guys I’m talking to on the platforms I work on think that I’m someone they know, and I have to convince them that no, I’m not that girl from Arkansas that you know on Facebook.

There’s been a few times where I’ve been hit up by other guys on grindr being like “it’s you!!”, but it’s only been a couple instances.

Mine was a specific fetish account, and 99% of my people were not local and spread out across the world. I think there’s maybe like 4 people who are local of my ~800 followers, so tiny percentage. There was one time where a guy was really inspecting me at a gas station like he was trying to figure out who I was behind my mask. Makes me wonder lmao

I’ve recently quit 3 months ago since quarantine is ending, I got vaccinated, and I can go back to work. It was fun at first but lost its charm quickly and became lowkey stressful. I’d feel really bad and guilty because some of these guys would get really obsessed and parasocial, and I didn’t want to encourage those kind of unhealthy relationships. Made me feel kinda scummy tbh. Found out I do not have the heart to hustle and that’s okay haha

Not exactly, but I did recently have a subscriber asking me to sext which was then followed by him disclosing that he actually knows me and was a bit embarrassed.

I told him he had nothing to worry about and in general am a very s** positive person. He then revealed who he was and was pleasantly surprised it wasn’t an ex or something, just an acquaintance who I had met a couple times and over all is rad guy 🙂

I have a couple friends from real life on my page, but same deal as long as they are respectful I’m happy to have their support!

Left her alone because she seemed to be on a first date with a dude, and I didn’t want to ruin the date.

Not necessarily the same, but my coworker came into the back one day and told me she just got $400 in her Paypal.

This is also the girl who agreed to let me take a picture of her having s** for a photography project.

She’s a waitress. (Not an accountant)

Sorta the other way around for me.

There was a girl who lived in my neighborhood when I was in elementary school, a few years younger then me too.

We would have water balloon fights and she was always around.

Pre OF I was a cam model on a couple of different sites for my different moods.

On screen I would wear a wig, change the contouring of my face, cover up tatts and set up the room that there would be no personal identifiers.

I’ve had a few skew looks once I’ve spoken but since I don’t wear make up outside of camming it hasn’t gone further.

One of my best friends had an ex that another friend randomly found on p**nhub.

This was just a few month after they broke up so she must’ve IMMEDIATELY started making a TON of films.

I guess if you see someone you recognize from your steamy computer times, yanno, just be chill.