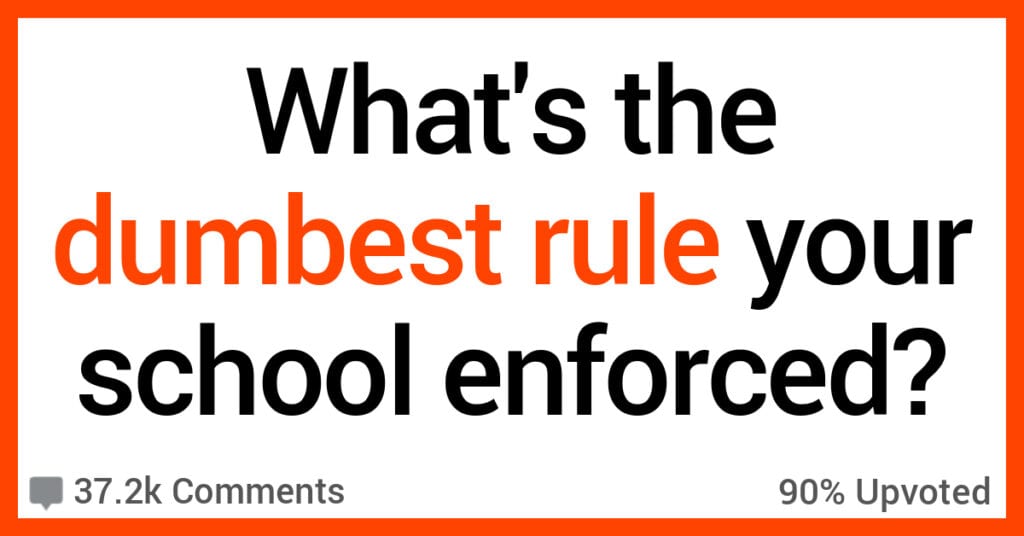 There’s nothing more satisfying than knowing that YOU are the reason there’s a new rule somewhere.

It happened to me at my old school, which was rife with plenty of ridiculous rules. Apparently I’m not alone in that.

What’s the dumbest rule your school ever enforced? from AskReddit

How are our institutions of learning striving to keep the peace? Reddit tells all.

1. “No jackets without the school logo”

I was a high school teacher for several years, both buildings I worked in were FREEZING, and having admin pull students out of my classroom during a 50 minute period & giving them detention instead of letting them LEARN is cruel and completely unnecessary, in my opinion.

If you throw snowballs, you get a one day suspension.

The first long weekend after a snowfall everyone would throw snowballs to get an additional day added to the long weekend.

I got Saturday school for missing a day of classes when I was 16. Seems reasonable, except I missed to go complete my US citizenship and officially become a citizen alongside my mom (it took us 12 years to go through the legal process, btw. Whole other issue).

I had a note from my mother as well as a signed official Federal form they give you to explain to school/employers why you were absent.

Apparently the only acceptable absence excuse was illness. I got punished for becoming a citizen 🤦‍♀️

That if you say/do anything back to your bully it becomes a mutual conflict and isn’t bullying, so if they start calling you slurs and making you feel bad every day and you call them stupid once or twice the school probably won’t help.

The new Principal made a “morning round-up” rule where anyone arriving to class after the last bell had to go to the cafeteria and listen to a lecture about not being late for class.

This took about an extra 15 minutes, making the students even more late to class than they would have otherwise been.

Needless to say, everyone hated it, even the teachers. That principal didn’t last long…

6. “Toilet paper must be rationed”

Apparently the high school girls room was going through too much toilet paper so the dean, a woman, stood outside the door and distributed a few squares of 1-ply institutional toilet paper to us as we went in. If she noticed toilet paper on the floor, our ration got cut down. If we asked for more for…bigger jobs…we were told to saved it for home.

There were several episodes of girls stuck in stalls until friends could beg for more TP because of period messes or unexpected bowel incidents. The dean wouldn’t even hand it over–she would go in the bathroom and pass it a few squares at a time over the door. If you didn’t catch it as it fell and it landed on the floor, well, that’s your fault and you’re not getting more. If you used more than she thought necessary, tough luck, go to class with blood/s**t on your body.

How did we celebrate?

By TPing her car, of course.

Closing boys toilets, because some c**t was stealing toilet paper.

When school staff announced this stupid rule, some students actually threatened to s**t on the tables then.

It wasn’t really the rule that was dumb but the reason for it. In my last year of high school, the school issued a rule that all students had to wear student IDs. If you didn’t, you had to immediately go and pay for another ID. While you can see how many students may have saw this a way to skip class, the reason for this was the school shootings that happened the previous year.

The reasoning was that it would be easier to spot who is a student and who is not a student to then see who has malicious intent…..except that most shooters were students….so….

In grade school, we weren’t allowed to play on the playground equipment when it snowed.

Eventually, were weren’t allowed to play with snow or even go near it- I got in trouble for sitting in snow.

This was in Minnesota where it snows half the year. Recess basically consisted of milling around the blacktop for thirty minutes.

Our tiny community got a burst of cash in the 70’s due to having mineral rights on land with oil. It was amazing some of the things we had access to for a school in the plains in Montana: computer lab, ceramics, photography, and a freaking laser! They also bought the grade school a miniature golf course in the center of the playground.

A majority of the playground was concrete squirrels, turtles and a whale. These looked like a lot of fun to play on for a kid. We couldn’t touch them. We couldn’t get near them. We couldn’t land our star wars figures on them, incorporate them in our games in any way or even walk near them when running from someone playing tag. Once in PE we got out the clubs and played a few rounds in my entire time in school. Other classes never even got that.

After about 30 years, during a student clean up, they got some of the upper level high school kids to take hammers to them and pulverized them.

You have to wear your tie all the way home.

My friend is an administrator at a private school in NJ and the faculty has to sign in and out of the bathroom using Google sheets.

The dean had a pack of socks in her office she would give the students and make them wear.

Except for Lily, who dyed her hair the school color (maroon).

It was dark enough to argue it was a weird red/brown, but it was clearly maroon and I think she got away with it because it was “school spirit”

If you were caught on your phone they’d take it until the end of the week. you’d get it back at half 3 on friday.

parents went mental and a few even came together and sent bills through for part of the phone bills, they ditched that rule after 2 weeks.

phones were kept overnight in the school in the office until that friday if they were confiscated. no safe or anything, just in a plastic box. no getting it back at the end of the day, you just had to go for days without a phone, even at home

What was the dumbest rule at your school?