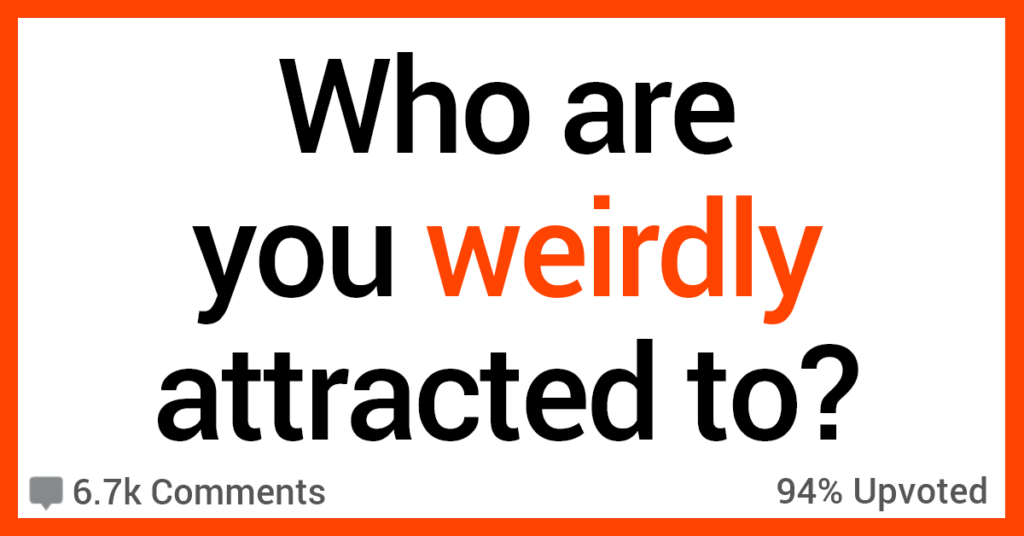 Here’s an interesting question that sort of stopped me in my tracks on Reddit:

Who are you weirdly attracted to? from AskReddit

The answer turned out to be “yes.”

There is always this one woman on my bus in the morning. Comfortable clothing, no make up, glasses, always reading a book and probably nearly twice my age. (40s i would guess)

I sometimes just can not stop looking at her. I never had this with another person.

My girlfriend: “Danny Phantom can get it. And his goth friend too.”

I need to change my workout routine. Anyone know how I can get more…angular?

it’s the voice and the mannerisms. I’m sure my weird taste like that must have something to do with living my life without any father figure.

Also had a very strong obsession with Johnny Depp starting at 9 years old and ending probably around 18.

Pirates of the Caribbean was my awakening what can I say. ? embarrassed

Or really any tall skinny doofus.

But yeah Matthew Lillard in the original Scream made me realize being into guys wasn’t just a phase.

And it turns out he’s a pretty nice guy as well from what I’ve seen on the internet.

A woman I used to work with who has some serious anxiety problems and has a very mild intellectual disability.

We’ve definitely caught each other glancing and then looking away.

She is stunning and you wouldn’t know she has any kind of disability until you really get to know her and talk to her.

I Still think about her to this day.

My dentist. I’ve been seeing him for like 15 years.

He’s way older than me and not a man I would look at twice if he wasn’t my dentist. But his presence is really comforting and the intimacy of his hands in my mouth has always been weirdly arousing.

Never would do anything, but it’s fun to imagine scenarios when I’m lying in the chair and he’s leaning over me.

I was once in a class with a girl called Vanessa. She was a really confusing person.

In one moment she is the kindest person in the room and in the next she’s ready to crucify you.

Never really liked her until I saw her cry one day. Her fiance was being weird and she was scared he wants to break up.

8. Matt Berry from the IT Crowd

Matt Berry is like someone took the accent of every single aristocrat in England, and averaged them all out to get his voice.

One day my wife came home from work having a new game. “You get to make a cheat-list with five celebrities, but–here’s the catch–two of them have to be men!”

I contemplated for 0.08 seconds and replied, “Terry Crews and Neil DeGrasse Tyson.”

Because her coworkers are pretty conservative, she’d anticipated some consternation at this requirement, so she was poleaxed by the readiness of my reply. So to this day we (only partially) feign my wild attraction to those two.

He’s not traditionally handsome. But he’s got that tall and dark thing going on.

Not only that, but he can be deeply serious and incredibly funny.

He’s such a great actor that he can play any version of your dream crush.

I don’t know what it is, but those curly pigtails hanging from their black hat and the dangly belts just does it for this Goy.

Yes, I know he’s dead. I mean when he was alive.

It’s a fairly recent thing since I ran across this clip of him singing in the shower.

That broad, burly chest is crying out to be hugged.

The only super serious argument my husband and I ever got into was when I told him I would much, much, MUCH rather sleep with Steve Buscemi than Mark Wahlburg.

He didn’t believe me.

Steve Buscemi is a MENSCH and a huge fan of my favorite band. And he wouldn’t be selfish like Marky Mark, if you know what I mean.

There’s a green grocer in my neighborhood. A woman in her late fifties runs it with her husband. She has an elegance that is difficult to put into words. Beyond her elegance is a tranquility that permeates the space around her.

I know she’s caught me stealing glances as I pick apples and oranges from the produce carts. It doesn’t seem to bother her. We lock gazes every so often.

Every time I go I feel nervous and expectant. If she wasn’t married, I think I’d try to get to really know her.

The smell of tar when new road are being laid out on the street.

Something about this smell that I had always enjoyed smelling. Maybe we if I was around this smell more often, then perhaps I would not liked it so much.

Edit: never mind, just noticed that the question was asking who and not what. My reply now seems weirderer than my intention.

I think these are all pretty understandable. Except maybe tar guy…

What would your answer be?