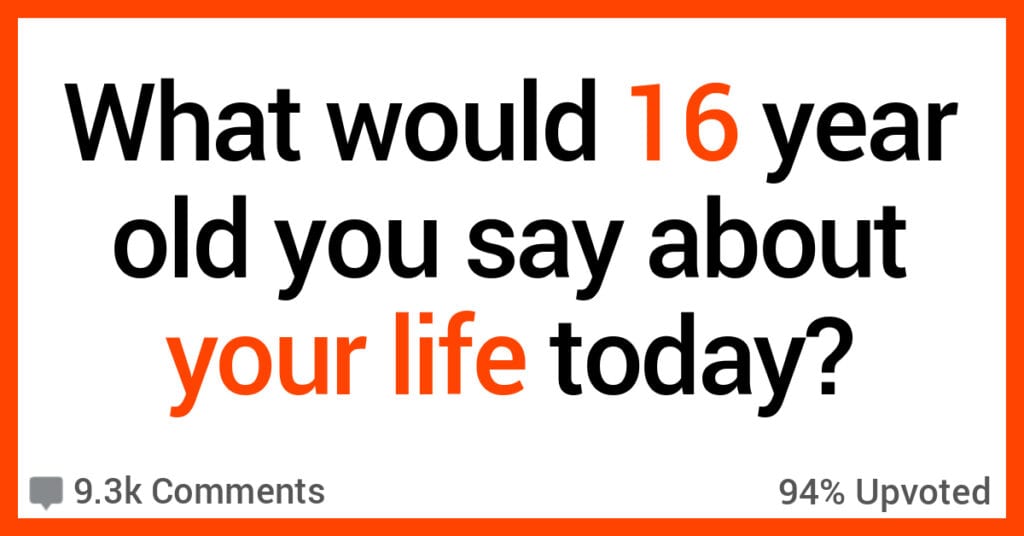 People Reveal What Their Teenage Selves Would Say About Them

We often think about what we would do if we could travel through time – but what if it wasn’t so much the current us going somewhere, as being visited by someone distant but familiar?

That’s the prompt in this thought on Ask Reddit.

Honestly, it’s a somewhat terrifying question. Let’s see what folks had to say.

I made a gingerbread house at Christmas for my gf when I was 16. Gingerbread gf in the front yard with frosting flowers, and me on the roof with a gumdrop hammer. I told her I would build her a real house one day.

We’ve been together 21 years. 2 years ago I built her a new house, as promised.

I think 16 year old me would be proud.

He’d be pretty excited about it.

He’d also think my wife is hot ’cause I do.

Its funny you say that because recently i thought about how if 16yo me saw my wife he wouldn’t believe it.

Of course i knew my wife when i was 16 but she just grew up to be hotter and hotter.

other than the job. it’s pretty dope.

Have the gaming setup of my dream.

Married the girl i had a crush on at 16.

have a little one with her as well.

live in a nice neighborhood with friendly neighbors.

Near a large pond so i can go fishing.

And i can enjoy weed by going to store like im buying a pack of gum.

All in all, im very fortunate

He’d be shocked. 16 year old me was in a juvenile detention facility awaiting trial for attempted murder. I didn’t have a future. I couldn’t see beyond tomorrow.

53 year old me is looking back at a dude who grew up to become a faithful husband of 29 years, and raised a daughter( who went on to earn a PhD in neurology and is on her way to do her postdoc work at Harvard). He’d see a dude that went back to school and earned the degree which launched a 20+ year career in database and application development for several branches of the federal government(and holding SC/TSC).

I’d like to think he’d be excited, but I barely remember that kid and for all I know he might think he turned out lame.

He’d be most psyched about how his guitar playing progressed.

6. All about the movies

Truthfully, he’d probably look passed the fact that I am a middle aged man who is 20lbs overweight and losing my hair and focus on the fact that I have, by 1993’s standards, a gigantic flat screen television and a home office filled with Lego sets from all the things I loved as a kid.

7. Light at the end of the tunnel

She probably wouldn’t believe what she was seeing.

At the time she thought she’d die as soon as she’d figure out a “good” s**cide plan.

Now that I’m finally coming out of depression, I tend to feel like it robbed me of so much time on my life and haven’t achieved what I wish I had achieved at a younger age…

But my 16 year old self would probably be proud and encouraging.

16 year old me would never believe I’d do anything even remotely related to science or engineering, or be good at statistics, or have a PhD.

That just was not at all in my thinking at age 16.

She would be surprised. She was so scared that whatever she wanted to do wouldn’t matter by the time she was in her mid-20s because she would just have to get married and make a family like everyone else.

She had no idea that she could just leave everything behind looking for her dream job, that it would be a very arduous but rewarding journey.

She would also not believe that she doesn’t have long brown hair any more.

I would probably be pretty mad at myself.

I gave up a career I worked so hard for to stay home and raise kids.

I think it was the right decision and I’m happy with it, but my sixteen year old self with big dreams, who’s working her a** off, would probably kick the s**t out of me.

She would probably be both disappointed and impressed.

I have crossed a lot of travel and adventures off the bucket list.

She might be disappointed that the career I am in is not what was planned and the fact that I am married as she swore never to do that.

However, she might be impressed with some other improvements to our life such as mental health, physical health, financial health, and the hobbies that I have now.

It would be a lot of mixed emotions, but 16 year old me would never show those emotions. I was an ice queen back then.

“Motherf**ker, you actually got the busty redhead (with dye, but nevertheless) wife and black and white cat you wanted. But how did you even get into that career choice? That’s not what I had chosen. It’s cool that you’re already planning getting your own house, though I would have expected you to own a car already. Decent gaming PC, but you don’t seem to play too often.”

13. The twists and turns

She wouldn’t know what to think because she would be devastated to learn that her dad isn’t here anymore because he died suddenly in 2014.

She would also be confused because she would think that I would be married by now but she would be happy to see me living with a boyfriend (16 year old me was single and really wanted a boyfriend).

She would also ask why I wasn’t a piano teacher like I wanted to be back then.

16 year-old me would be p**sed about my weight, I’m probably 100lbs over what I weighed then, but he’d be pretty happy with everything else.

He’d also be glad I finally learned “why” I’ve always been so terrible in social settings: rather intense general and social anxiety.

You live in another country? In one of the most cosmopolitan cities on earth? And you went to that university I’m longing to get into? H**l yeah! Wait, why in the everloving f**k aren’t you rich?

And why does it seem like the best part of your day is sitting on the couch watching movies in your underwear?

By the way, what are those colorful flags abou… OH S**T YOU TOLD PEOPLE

I guess we’ll never know for sure.

What do you think your 16 year old self would say?