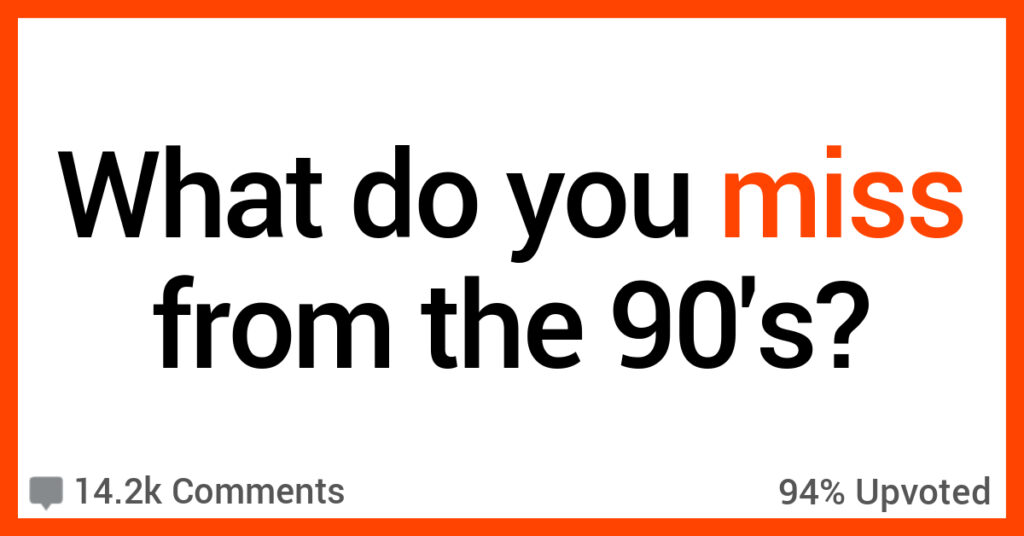 People Share What They Miss Most from the 90’s

Ah, the 90’s. It feels like a lifetime ago. Maybe even another dimension. Or a weird, puke-green dream.

But a lot of us miss it anyway.

What’s something from the 90s you miss? from AskReddit

What does Reddit think was the best part of this era? Let’s find out.

I was on vacation in the mountains up state and they had one in town. I got to have pizza in an actual Pizza Hut for the first time since the late 90’s early 2000’s.

We had one outside of town and then that closed and they made a to go one that ended up also closing. Now I can have one of the local places or Papa John’s or Domino’s.

The target nearby does have the mini Pizza Hut pizzas and some of their appetizers. It’s hardly the same as getting it from a Pizza Hut itself.

2. Goofing off without it being posted

I had to stop drinking with one of my friends because she’d ALWAYS record everyone doing anything even remotely fun or goofy and it’d be on snapchat or Facebook within seconds.

Like, I just wanna get a little drunk and dance and have a good time with my friends, I don’t want every person I hardly know seeing me let loose.

Being social with people felt so different and authentic.

My friends would sometimes just “drop by” to see if I was home to say hi.

We could pick up the phone and have hour long conversations.

The lesser dependence on technology seemed to cultivate more genuine friendships but that was just my experience.

We would all gather in my tiny college apartment to watch The Office every week. Good memories!!

And I believe Game of Thrones was the last time I did that with any friends as well.

I wonder if we’ll ever do that again.. weird to think that might have been the last time.

Back then you’d call your friend and it would ring somewhere in their house. If there was no one there (which was common) you’d shrug and just carry on your day. If you just wanted to chill out on your own you’d just not answer the phone.

Now, everyone knows people are never without their phones. I’ve had people p**sed at me because I took an hour to reply to a text.

It was extreme and alternative, not family-friendly wacky or dystopian like a lot of people think when they see an 80’s aesthetic.

Example: the entire aesthetic of Nickelodeon in the 90’s. Slime and extreme s**t.

It’s unreal how blithe some people have gotten toward privacy.

My brother’s a high school teacher, and a few years ago he caught a girl in his class livestreaming herself just…sitting there, learning. He asked her to stop, and noticed that there were 15 people apparently watching her on the stream, and suggested that the kinds of people who would watch a 16-year-old girl sitting in class are maybe not the kinds of people she should want watching her.

The girl’s response was a confused “Why not?”

There was a time when my kid could have moved out and rented with room mates or even on his own.

But its very hard for young people to start out with the current condition.

Free from most adult responsibilities, free from social media, free from bulls**t politics (they were there for sure, but you literally had to look for them, lol), free from a general miasma of fear coming from the media.

When I think back, all I remember is sunshine, the lack of a weight bearing down on my shoulders all the time and the sweet sounds of amazing music.

While I miss it, I am just grateful that I got to experience it.

It was a pretty happy decade. The Cold War was over. The economy was booming. Technology seemed to be offering us solutions before we even knew we had a problem.

The products of pop culture almost never dwelled on dystopia or decline.

Air travel was about as dangerous as bus travel.

Acid rain and the hole in the ozone layer were problems of the decade before that seem to have been fixed, and climate change was still called global warming and was not nearly so front and center in how people talked about the future.

All in all, the 90s were a pretty solid decade.

Seems like I’m talking about the 50s but in the 90’s these places still existed. In my hometown most of them are completely gone and were replaced by generic corporate chains or condos. The ones that are still around are struggling to stay afloat and compete.

I’m glad I got to enjoy them while they existed but also realized how much I took them for granted.

I miss how chill and cool airports were.

Watching the plane leave after hugging my parents goodbye or waiting at the window watching it dock knowing someone you were waiting for was about to get off.

Arcades died specifically because home console graphics caught up to them. The PS1 and Saturn got close enough that the differences started feeling minor and then with the Dreamcast and PS2 (and the rise of online gaming) it was all over.

It’s not as though Dave and Busters and Round One are unpopular, but you go for experiences that don’t translate as well to home, which means the few modern arcade games are either steering wheel racers, light gun games, or peripheral-based rhythm games.

That and eating them while watching back to back episodes of Saved by the Bell on Saturday mornings. Good times…

Yeah. I agree. With just…all of that.

What do you miss about the past?