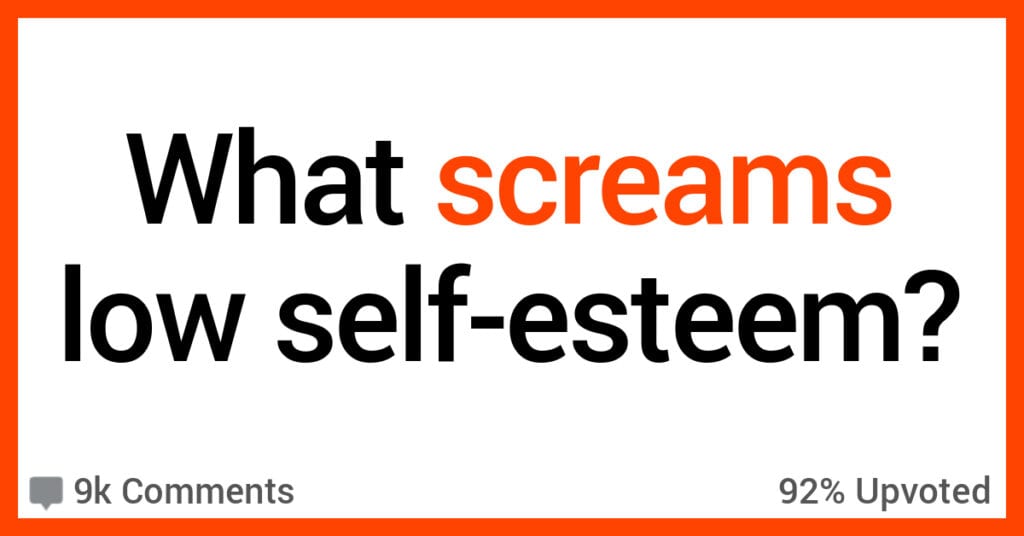 Insecurity and low self-esteem is something we all have to deal with from time to time, unless we’re totally narcissists.

But it can lead to behaviors that not only make us feel worse, but can be troubling to others around us, which just makes us feel worse, and the vicious cycle continues.

What screams "I have low self esteem" ? from AskReddit

So what should we look out for and try to deal with honestly? Reddit has some ideas.

1. Badmouthing the interests of others

I cross stitch, and some of my pieces are very intricate and take a long time. I am really proud of them, and the focus it takes to complete them.

I had a date tell me that cross stitch was the most useless hobby he had every heard of, and I was just flabbergasted. First off, why do hobbies have to be ‘useful’? Secondly, it provides me with entertainment for a long time, and it then serves as decoration! But even without all that, if I enjoy it, why try and take that away from me?

2. Assuming it’s all about you

Constantly assuming other people are looking at you, judging you, making comments about you, etc.

Believing that other people are overly fixated on you or your life I think is a huge sign that your self esteem is low- most other people, especially strangers, don’t really go out of their way to obsess over a stranger, and if you’re constantly trying to read malice into a random person’s subtle actions, you probably are too concerned with how you’re being perceived to the point of imagining negative attention where none exists.

My mom used to put me down constantly for speaking up and I just learned to apologize for everything just in case I actually did something to deserve her anger.

As an adult it’s just one of those things you have to be mindful of. When I find myself starting to over apologize for every little thing I take a moment to think about what I actually need to apologize for. Sometimes it’s just as simple as changing an “I’m sorry for being late” to “thank you for being patient”.

It screams I my self esteem is tied to material goods, and waste all my money on disposable items.

It implies they likely don’t have real wealth in an investment account and are likely living paycheck to paycheck.

It’s interesting how the answers in this thread are very polarized.

Some insecure people turn outward and project confidence or meanness, while others turn inward and self-doubt/apologize for their existence.

Both are insecure, but they display in completely different ways.

6. Getting angry when you’re wrong

Clearly their brain is going through a lot of paces to convince themselves that they’re smart/capable/what have you.

When they’re shown to be wrong about anything it’s like a rug is pulled from them. Mind you, this isn’t just mild annoyance.

This has the potential to be a controversial suggestion, but laughing at the end of every sentence.

I didn’t believe it at first, as it was something I did myself, and I truly believed that I was just doing it to be friendly. The more I looked into it though, the more apparent it became that I was nervous all the time.

After some self-reflection I realized that it’s fine to end a conversation simply and bluntly if I’ve got things to do. Before I would have hung around trying to make small-talk and jokes.

I know someone like this. She’s always bragging about how everyone loves her, but the second I get a compliment she’s quick to get all eyes and ears on her again.

I’m just now realizing this too, I used to look up to her a lot. But now I just feel bad for her bc she needs so much validation.

9. Not believing in your spouse

Constantly needing reassurance that your spouse loves you still.

Feeling super insecure in the relationship, even after being together through thick and thin for 30 years.

Apologising and clarifying every time you say something you think may possibly have been misinterpreted in a way which could maybe cause someone to feel offended.

By all means correct yourself when you word something stupidly, but at some point you have to have confidence that reasonable people will understand what you’re saying.

It’s a very common symptom of depression and low self-worth.

Of course it can come from extenuating life circumstances, but it’s definitely a good reason to check in with someone.

There’s a fine line. Learning how to vet unsupportive people from your life is a key part to being healthy. if “hater” helps people realize that, it’s a fine word.

That said, the people who use it as an excuse to avoid criticism rather than look critically at their relationship are being the opposite of healthy.

I always think there’s something a bit off about people whose stated motivation for social media posts and Youtube videos is to “inspire others.”

You can’t categorize yourself as inspirational – that’s not how it works. That’s something other people tell you.

I got not judging people for their choices but too many people are PRO plastic surgery and ENCOURAGE it as a way to “express yourself”.

But, the fact of the matter is most people seek plastic surgery for something they’re insecure about regardless of whether or not it’s rational.

So, you have young people getting extremely expensive surgeries that they literally do not need in order to feel like they fit in.

That’s straight insecurity and has nothing to do with expressing yourself.

I’m 22 now and almost every girl I know my age has already scheduled a nose job, it’s extremely depressing.

I think most of these make sense, and I can definitely see a few of these behaviors in myself.