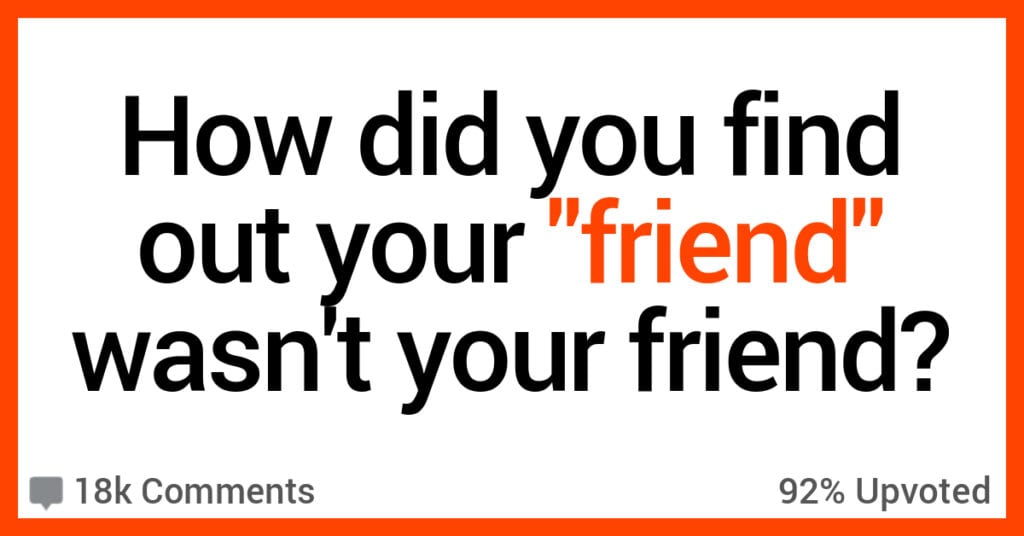 It’s heartbreaking to lose a friend in this world. Maybe even more than losing a lover or a partner.

There’s an assumption that a true friendship will withstand anything.

But when that betrayal comes…man does it hurt.

What’s the shittiest way a friend has shown you they weren’t really your friend? from AskReddit

Here are just a few awful stories, from Reddit.

Ghosted me after 20+ years of friendship.

He was my best friend for as long as I can remember but at some point he just stopped saying yes when I suggested getting together. We could have a conversation about anything but the second I brought up doing something it was radio silence. He finally agreed to something then blew me off like an hour beforehand. No rain check or suggestion we try again. I was depressed for days but that was the day I gave up.

He was the best man at my wedding. I loved him like a brother and still hope he’s doing well and happy. But the rejection hurts so much that I just don’t try anymore.

I’ve mourned the death of our relationship and am done with it. And I still don’t know why.

When I was a kid, I had a friend who was poor as h**l. My family didn’t have much, either, but his was worse off. I used to give him things, now and then. Toys, and whatnot.

When I was 10, my mom died. Some months later, I was at my friend’s house, and he showed me a cassette tape that I’d given him, and then played it. It had my mom’s voice on it. For some reason, I had recorded a conversation with her. I thanked my friend for the tape, and he asked what I meant. I told him thanks for giving it back. He said that no, I gave it to him, and it was his. Then to show that it was his, he took it out of the tape deck, pulled the tape from the cassette, and snapped it.

We were kids, sure, but that was one of the sh**tiest things that someone has ever done to me.

She would always be late to everything

She got tickets to an Incubus concert and a meet and greet, it wasn’t in our city so I saved all of my money to be able to afford the trip and a week before she texted me saying she was going to Disneyland so she sold the tickets

Invited me for coffee and I got really excited because I hadn’t seen her for a while and had a lot going on, I was almost homeless at the time so I took the little money I had to pay for my coffee, I got there and it was a MLM with like six other people (just as disappointed as me)

Then she did it again, I don’t know why I thought it would be different, that’s the last time I saw her

4. Order in the Court

I had a falling out with my best friend and at one point they wanted to reconcile so we had a day together and it was good.

About two weeks later I am summoned to court on traffic charges and refusing to appear. It turned out that this person was stopped by police, did not have identification and claimed to be me.

Once the judge read the police report, giving physical description of what was supposed to be me, he looked at me and dismissed the case.

I never saw that person again.

They called me up and invited me over to play a game with them and their friends. At the time I had only barely started driving, but I decided, yeah, that sounds like fun, so I went over to play.

When I arrived I found out that they had volunteered me to pick up the other friends. I was not prepared to do this, but she trapped me because I had already agreed to come play “with her friends”. I was pretty annoyed by this, but I went ahead and drove to three places picking everyone up, and no one was really ready to go when I arrived and one of them also needed me to drop them back on campus to drop off their school assignment.

By the time all was said and done it was really late and I needed to get back home because I had to get up in the morning to go to work. Not one of them even said thank you. The friendship didn’t really last much longer after that.

In 8th grade, after I switched schools, a friend of mine called me one night and told me a kid I wanted to be friends with killed himself.

3 months later I visit their graduation ceremony and find out he lied to me and that the kid was still alive.

My best friend since middle school got me knocked unconscious after starting a confrontation with a large group of guys.

Proceeded to tell everyone we worked with that I had started it.

Few weeks later I had returned from a holiday to my home country and he had moved one of his friends into my room at the place we were renting.

Never talked to him again

My best friend got with my first husband while I was pregnant, helped destroy our marriage, supported him so he could quit his job and avoid paying child support.

Then she joined him in abusing my kids while they were with him, and then tried to cry on my shoulder when he ended up screwing her over when they split after 14 years of jointly making my life a living h**l.

She quit when we found out it was her who lied as she knew my boss would can her a**.

Oh and I’m the one who got her hired

I forgot to add the best part of all- I was one week post partum on maternity leave when she decided it was the appropriate time to do all this.

Talk about some ppd… it was rough

Friend took me out to lunch and let me cry to her after I broke up with my ex. She said she had to go to her moms for awhile and she’d be back that evening with treats and a Redbox.

She ended up hooking up with my ex

Made us come to her seminar thing for some pyramid scheme thing (I just know it is), I thought we were going to hangout and she told me that she was going to bring us out and eat.

She just abandoned us right after that s**t

We were friends since babies, our moms worked at the same place. My mom saw him as her own child and frequently he was at our house after school, because her mom was kind of absent.

His family moved out of the state but we kinda kept in touch then he came back, while we were on our 20s; my mom was going to start remodeling the house, he insisted on helping us since he was working with a construction company.

Long story short, he said he needed some money for the construction permits, in hindsight it wasn’t even that much but he took the money and we never saw him again, he even blocked me on Facebook.

We later found out that the permit costs was a fraction of the money he took. Biggest pain in the heart was watching my mom crying, disappointed that her “own son” would do that to her. So f**k him.

My ex got with 2 of my friends after a pretty bad breakup to the point where it just seemed like she was trying to hurt me and my so called friends were willing to do the same to get some action.

So I was in the car with a 3rd friend on thanksgiving eve telling him how much this was affecting me to which he replied “that’s so sh**ty man I’d never do that to you” well that Christmas the very next month another friend shows me a picture of that friend and my ex together on instagram…they started dating shortly after that.

She started f**king my husband while I was pregnant. […]

Yes, I divorced him, and haven’t spoken to her since I found out.

The experience was a catalyst for a metric f**kton of personal growth, and I’m now living a fuller and more authentic life without them in it.

My “best friend” in high school invited me to a blink182 concert days in advance because someone else cancelled.

He was in my driveway and I was about to get in his car and the guy called him and said he changed his mind so he left to go to the concert without me.

That’s all pretty awful. Maybe some friendships were meant to end.