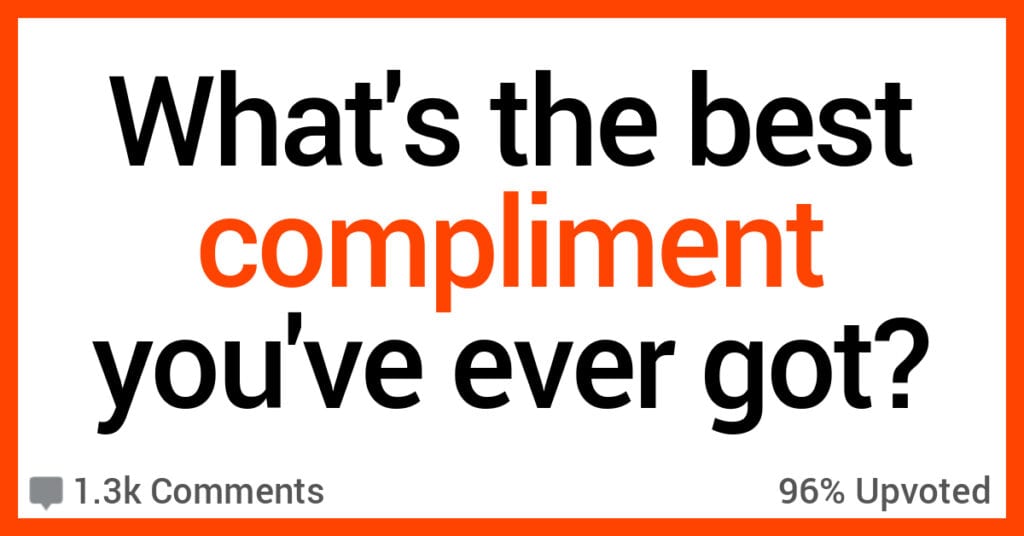 In the immortal words of Kollektivet

It’s a universal need, clearly, which is why it made its way to Reddit.

What is the best compliment someone ever told you? from AskReddit

So what are the best ones we really hold onto? Let’s see.

I was having an eye test, and I was on a machine that measured the pressure of your eyeballs. Mine came up elevated, so the 70-year-old optician took another reading, and just said, “miss, you have the thickest corneas I have ever seen.” And for the rest of the appointment, he just kept telling me how great my corneas are.

Suffice to say, I now have the weirdest brag.

“If I were a cat I would want to be your cat.” Spoken by the veterinarian after my little furry guy lost his battle with lymphoma.

So many people don’t visit their sick pets when they have to stay at the vet. I came every day to sit with the cat and pet him and feed him out of my hand. It makes a difference. A lot of animals don’t understand they’re in pet-hospital. They think they’re being abandoned and get really depressed. The extra love didn’t save my fur kid but it bought him time and he knew he was loved.

The vet even made a donation to a veterinary school in my cat’s name. (It’s rare but it happens). About the sincerest compliment it’s possible to pay.

“You’re videos are getting exponentially better. You could probably even do it professionally if you wanted to.”

7 years later and I’m now a documentary editor. Thanks Steve.

My 6 year old nephew said, “if you were my age we’d always be in trouble. ”

I went to rite aid to pick up a prescription. With a mask on. And the woman grabbed the prescription without asking my info.

I said, you remember me! Even with the mask! And she said yes because you have beautiful eyes.

It was just so sweet. It’s kind of superficial but it made me smile. I don’t regularly pick up from them so she has a good memory

“You have perfectly round head.”

It wasn’t just one.

I almost died from a terrible accident. Friends wrote my wife letters letting her know what an impact I had on their lives.

Needless to say I survived. I read them all. I never knew I was so well liked.

When I retired I sent an email to everyone in the company that I worked with on a regular, semi regular or once in a while basis.

I said I was leaving, related how I was hired, what jobs I’d performed and what locations I’d worked. I told them that I’d miss the vast majority of them. And wished them well.

I got back about three dozen responses with all sorts of nice things written about me (I had no idea what a nice guy I must have been 😉 and a ton of ‘Best of Luck’ messages.

9. My son should meet you

I’ve been a nurse in my NICU for 12 years. We have a core group of doctors so I’ve known them just as long. And I’ve managed to develop personal relationships with some of them.

The attending physician, a hardcore, flat affect, sometimes mean, will always make new nurses cry, likes very few people, and rarely ever calls people by their name told me last year she wanted to set me up with her son. It was the best compliment to know she thought so highly of me that she wanted me to meet her son.

She said her son needed a great woman in his life, referring to me. I thought back to the time she made me cry 12 years ago, to where were we were in that moment. It was the best.

A few from a very good friend of mine

Just after we met “you’re so open! That’s very likeable!”

“I really wanted to do this with you!” (going out for a drink)

“I’m so very very proud of you!” (after I addressed some difficult stuff to my boss)

‘You’re a good googler!’, was said by my online teacher after I found two articles in a row he had been looking for for years.

I’d like to think of myself as resourceful, so this was so nice to hear

It’s a treasured memory of mine. I was in 8th grade, didn’t really fit in and was bullied.

One day the popular girls went through the classroom and told everyone if they liked them or didn’t like them and why.

When they came to me, the head girl just said “you’re normal.” and left. I still don’t understand why, but I wasn’t bullied for the rest of the year.

“That girl’s gonna change the world”

Wasn’t actually said to my face, I overheard it as I walked away

14. Congrats on the effort

After having a very depressing freshman year at college I needed to change my life around and get back on track academically, emotionally, and physically. I was immensely overweight and 430lb+ at end of my freshman year, this was effecting me all around and causing me to skip classes and fail. I started going to the school gym early in the morning what the place most mostly empty and started just walking and doing some of the weight machines.

I lost 85lb in 6 months, during this time there was another gym patron who was there quite often who was very fit and he came up to me and said he was impressed with my progress and noticed all the work I was putting in and just congratulated me on my efforts.

This really meant a lot to me, he probably didn’t even realize it. I don’t know his name or anything and he was basically a complete stranger but it really kept me motivated. I’ve lost over 200lbs in total, gained a lot of self-esteem, finished my undergrad with a pretty decent GPA, then my master’s degree with a 4.0 GPA and got hired into a pretty good job. Life is good.

From my dad after planning a destination wedding for a sister in another state, her engagement party (which was awesome because we were skeet shooting), while working full time and kids and Covid. He didn’t know how much that stuck.

Those are, indeed, some world-class compliments.

What’s the best one you’ve ever received?