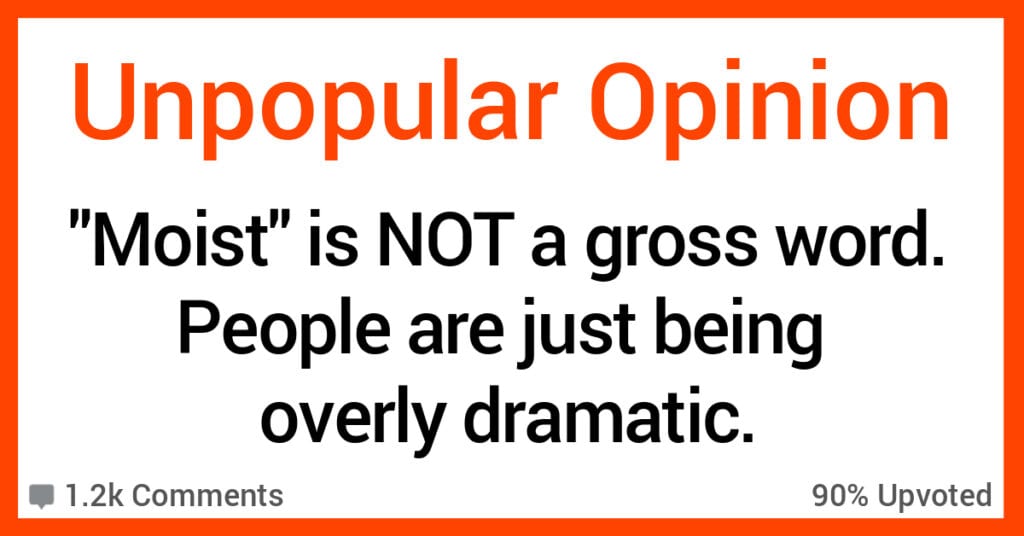 Unpopular Opinion: It Might Be Time to Forgive the Word “Moist”

Let’s talk about the word “moist.”

It’s time we finally faced this societal ill and started asking the real questions. Taking hard stances. Like this one:

What say we? Is it time for the ban to end? People of Reddit, lend us your input.

2. Time for a revolution.

Me and some friends had about a week long gag, using moist as a synonym for “cool.” around ten years ago.

Our plan to start a trend didn’t work.

I love it when people with deep voices say moist.

Did it start with How I Met Your Mother? I always enjoyed that episode but never understood how it led to so many people trying to base a personality around being “anti moist”.

I think people have moved on to the point that when someone tries to pull the “moist is gross!” move they end up getting roasted themselves for their lack of creativity.

You wanna know a f*cked up word? Syzygy. That’s some bullsh*t. No vowels, unless you count Y as a vowel unconditionally, in which case you can suck my diphthong.

I’d argue that no words are “gross”. It’s pure context, nothing more.

Except for me personally, the word “feet” is gross because it gives me an instant image of several sets of human feet, of which I find horribly disgusting no matter who’s or how ‘clean’.

I love that word. Sh*t’s fantastic.

I like to scream “MAKES ME SO MOIST” in my best Fran Drescher smokes 3 packs-a-day impression.

This is why I use better synonyms to exasperate the word like dank, oozy, clammy, damp, muggy, soggy, dewy and claggy just to keep it spicy.

Anyone who brings up their contempt for the word “moist” is automatically sorted in my brain into the category of people so dim-witted and unoriginal they’re not worth further engagement. Run of the mill opinions copy-pasted from some internet fad that died ages ago, presented as “quirk” – not exactly inspiring stuff.

What if I told you “hating justin bieber/nickelback/twilight/comic sans” aren’t actually personality traits.

I have misophonia. I don’t hate the word, but it does sound terrible coming out of some people’s mouths.

The smacking of the saliva and the long s they use when they say it makes me cringe.

Most everyone has words that they just don’t like for whatever reason.

But yes, the “moist” thing somehow picked up popularity and now everybody and their dog has a complete visceral reaction to it just because that’s what you’re supposed to.

it just sounds unpleasant in my ears. there is another word that i dislike with similar passion, but it’s in my native language, so you won’t get it.

on the upside, there are plenty of words that i like how they sound so so much, not the meaning of it. caramel, for example. i don’t like the thing that is named caramel, but i really like the word.

Moist describes a lot of gross stuff, but I hate it when people react to the word like I just spit on them or something.

I actually preface the word moist with “sorry to use this word but…” because SO MANY people have made it into a thing.

I think it comes from it being used to describe gross things often. It’s how you describe a good cake, and cake generally isn’t a gross thing.

If any word should be considered gross, its slimey.

Not a d*mn one of you perverts would have survived a baking, pottery, or plumbing class in the 1980s or before!

Well, I think this has been an informative, vigorous, and moist debate.

But we have yet to consider the most important opinion: yours.

Give it to us in the comments.