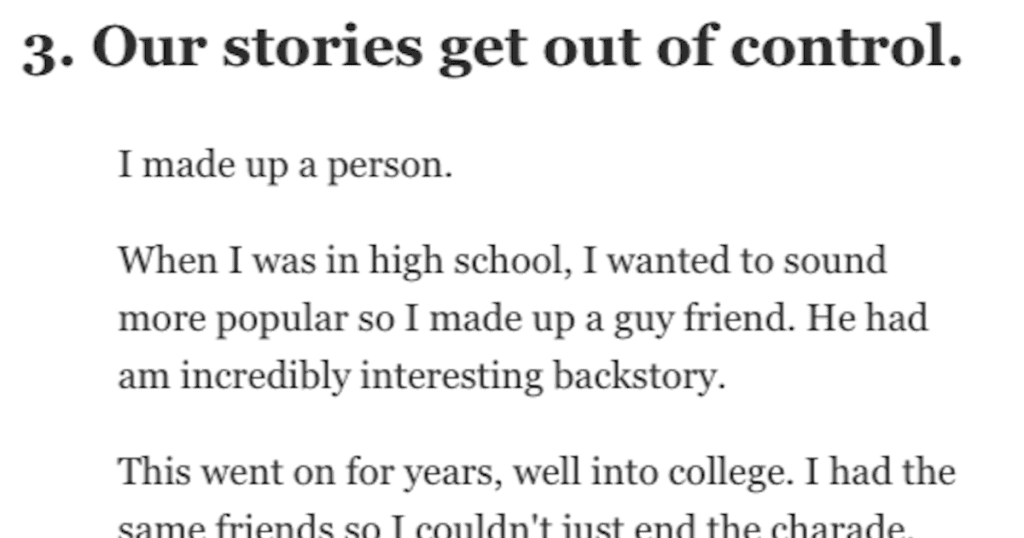 People Share the Secrets That They Carry Around With Them

We’ve all got secrets, but some nag at us harder than others. They can be little events or pieces of knowledge, or overall habits or situations that we just can’t bring ourselves to share.

These secrets came to light anonymously when user YourOwnBiggestFan took to r/AskReddit to ask the following question:

What is the most disgusting secret you’re hiding right now? from AskReddit

The answers ranged from the funny to the strange to the jokey to the very, very dark. Here’s a small sampling of just some of the things you’d never know people were carrying around in their heads.

A majority of the time, the voice in my head/first thoughts are just really unnecessarily mean. Towards myself, but especially others. Even those I care about. Extremely nit picky, selfish, rude, etc. thoughts. I dont understand why.

Sometimes it leaks out into the real world on its really bad days, and I’m just an ass. It makes me feel pretty bad about who I am as a person sometimes. Because I really just want to be a lovely person and think the best about others. And I dont feel like a good one very often because of these thoughts.

That last year when I was suspended from work for 6 months it was due a failed post accident drug test, I wasn’t laid off.

3. Our stories get out of control.

I made up a person.

When I was in high school, I wanted to sound more popular so I made up a guy friend. He had am incredibly interesting backstory.

This went on for years, well into college. I had the same friends so I couldn’t just end the charade.

The funny thing is all of these people: my family, my best friend, even my husband believe that they met this man. I never introduced them to anyone, but over the years, they all have different memories of seeing him.

Finally, I just sort of phased him out, saying that we grew apart and lost touch.

And yet, people will randomly ask me for updates on him. I just give vague answers and watch my husband smirk from across the room.

My husband is the only person who knows the truth. I am so ashamed that I will never admit it. That lie was such a dumb thing that snowballed.

I used to make up stories to tell people, just for the sake of it. I don’t do it anymore, although this leads me to telling the same stories over and over

5. Careful who you tell your secrets to.

We weren’t close; but she decided to tell me and the rest of our group one day that she cheated on him at a sorority party and decided to not tell him.

It would be so easy to let the guy know anonymously.

6. Sometimes there’s no accounting for how we choose to lie.

My one friend has no idea that I’ve known that he doesn’t have kids for months, also that I know he’s been saying this and lying to everyone for attention.

He tells a very convincing story. He goes into vague details, has a photo of the girl, says that she’s been showing him fake paperwork as proof for the children. If what he says is true would be literally extortion. Everything. Little does he know that I’ve been watching closely and also researching to find this woman. I know she isn’t real and that he’s lying and been lying this whole time for almost a year. Nothing he says makes sense and it just keeps escalating which also doesn’t make sense. I literally couldn’t help myself but investigate.

If everyone finds out that he’s been lying this whole time it will spread like wildfire. He doesn’t have many friends and the friends he did have stopped talking to him because of his compulsive lying.

7. Money is the root of so much stress.

I’m in a lot of debt and its potentially going to ruin my relationship.

I dont trust my partnet with money, I’ve been tracking how much he spends on weed per month and its a lot- i don’t know how to bring it up because we are saving for a house but 95% of everything we have so far, is from me, while he spends 500 a month on weed

9. The hunt for an income is cruel.

I need to be spending my time applying for jobs after I got laid off in April, but it’s so overwhelmingly hopeless that I can’t make myself do it.

My field is collapsing in on itself and I’m being sent rejection letters from retail jobs.

I’ve been telling people about all the jobs I’m applying for but really I’m just not.

10. Letting go isn’t easy even when we know we have to.

I logged in my bf’s Telegram acc from my device and found he was dating me and other girls at the same time.

Gotta log out and leave him but i can’t

11. Scars can stay with us forever.

My room is a mess and I, an adult, treat myself as an abandoned child I once was, and I hate it.

I wanted to stay around for my pet who was my only family, but he died in july.

12. Someone is reaching out.

I was so lonely in high school (I did online for my senior year) that I only got my xbox so I could use the voice chat to make friends.

I hate the way I look so much that it makes me physically ill to think about making friends who can actually see me.

Through voice chat, they just know my personality.

13. Healthcare shouldn’t be a matter of affordability.

I have a medical issue that could easily be solved by a quick telemedicine visit, but I’m barely getting my bills paid right now, so I’m just dealing with it as best I can with over the counter treatments.

It helps but doesn’t take care of it completely and it just keeps coming back.

14. We take two steps forward and one step back.

Two years ago I lost 70 pounds.

I swore to myself that no matter what I’d never weigh over 200 lbs again.

Right now I’m at 201 and I fucking hate myself. I’ve been dieting for there weeks, lost two pounds the first two weeks and then gained it back the third.

15. Careful what you read on the internet.

If you’re carrying out a secret that’s eating at you, don’t hold it inside. You’ve got people around you who care. Get the support you deserve.