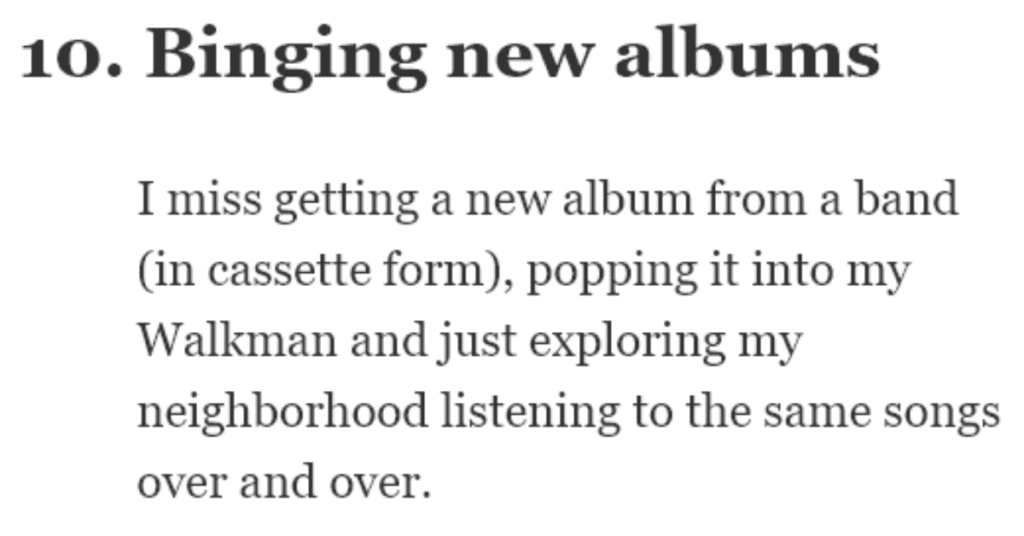 People Share the Things People Desperately Miss About the 90’s

I still have to remind myself from time to time that the “future” in Back to the Future came and went more than 5 years ago.

It’s a little frightening. And it’s nice to remember the simpler times.

What’s something from the 90s you miss? from AskReddit

So what was it about the 90’s that just captured a special feeling? Reddit tells all.

I was moving cross country and called a friend to bring me my toolset he borrowed so I could put it in my checked baggage. He never showed up and I thought well, that’s that.

Sitting on the plane, the stewardess walked up and said are you “____” I said yes, and she just handed me my 120 piece toolset complete with hammer, socket wrench, screwdrivers, carpet knife and explained the friend had arrived at the gate just after I boarded.

Even back then I was like…”seriously?”

A lot my favorite movies are mid-sized thrillers from the 90’s. A lot of big actors, but not huge spectacles.

That segment is dying out. You have huge blockbusters for international markets, some prestige period pieces, comedies and indies. And then there are TV shows.

But the sort of ‘Harrison Ford’s wife is missing, again’ films are severely lacking theses days.

Now I have an endless supply of s**t to keep my mind occupied. I never find myself wondering out for the sake of finding something to do. Trying to call everyone in my book to find someone to hang out with it.

I think part of the problem is that the endless supply of distractions just aren’t all that satisfying. They’re rarely worth remembering or talking to people about. I don’t really feel like I’m living. Just existing.

Man, and then you saw that summer movie in the theater and loved it but then you had to wait for it to be on video.

That first time seeing that at Blockbuster or your local place after waiting like six months for it to come out was magical.

I miss the lack of interconnectivity.

When I went from Western New York to New Jersey to see family, it was basically like being on another planet.

I think I like everything being more connected, but that sense of distinctness is something I miss.

Before AOL discs were available everywhere there were online service providers like Prodigy, CompuServe, Delphi, TheSierraNetwork, and GEnie.

The internet used to feel more like islands in an ocean instead of rest stops all on the same highway.

We still played outside but had some awesome multi player games that you played together in the same room. The world seemed to be heading for better and better things.

I have my computer set to manually connect to the internet. I still have to sign into steam to play a game that isn’t dependent in an active connection.

Those were the f**king best.

My niece is big into Pokemon now, and she just got a s**tload of cards for her birthday. Made me want to start collecting them again, but I look up the packs from my youth and they’re astronomical prices.

I miss getting a new album from a band (in cassette form), popping it into my Walkman and just exploring my neighborhood listening to the same songs over and over.

Now with music streaming services and access to all of the music ever created I actually almost never listen to new music. And when I do, I feel silly listening to it over and over. Even songs I like these days, I rarely remember the words to and I never even remember track titles.

It used to be, if I got a Green Day album, I listened to it until I memorized all of the track names and all if the lyrics. Simpler times and more free time I guess.

11. A small world after all

Sure there are a lot of really great things about being able to talk to anyone, anywhere at anytime.

But the appreciation of how big and impressive the world really is because of how hard it was to contact people in different countries AND the bonds you formed with people in your closer community.

That’s something that is gone forever.

Yeah, technology was booming, but there was a sense of independence that I feel like a lot of kids don’t have anymore.

I feel like growing up in the middle class U.S. in the 90s had the best of both worlds. I was able to play video games and all that stuff, but I still had the freedom of my mom not knowing where I was at every second of the day when I was out in the woods with my friends or playing somewhere.

I also miss the whole sense of being “proud to be a kid” if that makes sense, where the divide between childhood and adulthood was not a thin line. I mean that in the sense of we had shows like Recess, and the “kids’ unwritten code of honor” and we had celebrities who were just for us.

I do think that today’s culture, especially with social media, has muddled the line between childhood and adulthood. I don’t think it’s bad, and I don’t mean it to come off in a Holden Caulfield kind of way, and I’m sure that Gen Z is having and had fantastic childhoods too, I just think that kids today are thrust into maturity a lot faster than us 90s kids were.

It was much easier to listen to new music when I wasn’t really in control of the music I listen to.

Now I’m one of those people with the same playlist with few songs that never gets really updated.

Ubiquitous cell phone ownership and usage has made everything very “on the fly”. Just hanging out with people required legit planning. There was no such thing as “Let me call so-and-so and see where they’re at” because if they answer was anything other than “Sitting by the phone waiting for your call” then you were out of luck.

But it meant that those interactions were much more deliberate and meaningful. You looked forward to those meet-ups. We don’t “make plans” for the small stuff anymore, we just fish for interest in the moment and maybe someone is bored and will stop by. In some ways it’s much more convenient, but that convenience has taken something away from the quality of the experience.

I miss the days everybody was trying be different which so ironic now because now if you aren’t in sync with what people are today then you are behind and stuff.

It was such a carefree Era, I loved my teens.

Tell ya what I don’t miss: dial-up. That can stay in the past. Forever.

What do you miss?