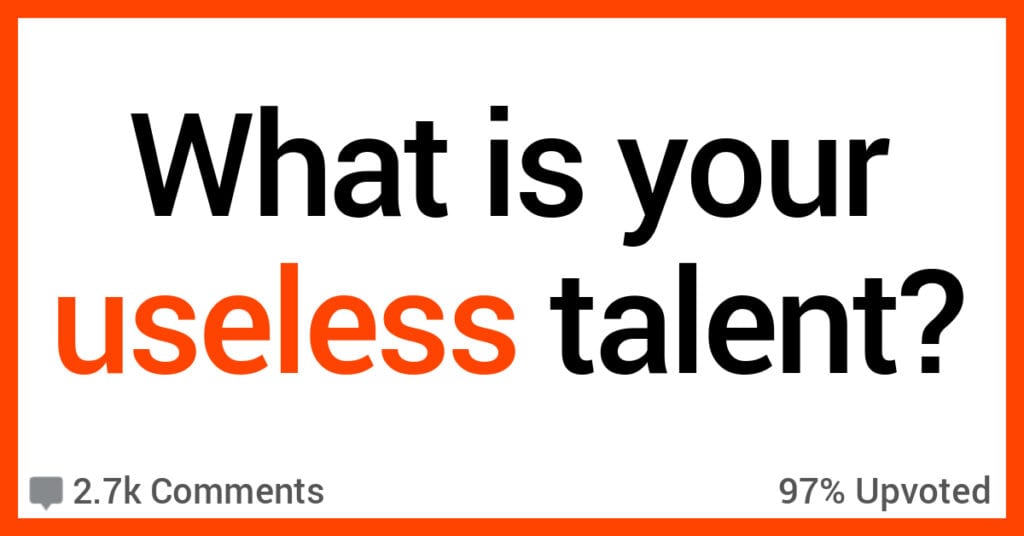 People Share Their Most Useless Talents With the Internet

Useless talents, or useless skills. We’ve all got ’em. I’m really good at the pogo stick, for example. I set a record of over 5,000 consecutive jumps as a kid.

Why? I have no idea. It wasn’t a competition. Nobody even saw me do it. I just jumped and counted in the driveway one morning until I got too tired to keep going. And it’s the little things like that you learn to treasure.

What’s a useless talent of yours? from AskReddit

Let’s hear about some other useless treasures, via Reddit.

I can make a disgusting parody out of any song. ANY song.

Knowing if someone is unpacking any sweets in the kitchen.

I trained for a long time to only move one eyebrow as a child and as a side effect I can wriggle my ear on that side too.

Once I could lift one eyebrow I was satisfied and didn’t bother to train the other side.

I can burp whenever I want and as much I want, without limits.

I mean, I can fill my stomach with air at will, allowing me to burp again and again. Also I can hold it long enough to make it go down and allow me to rip massive 7-9 seconds long farts.

Downside is that is that all that air pressure makes me look like an 8-month pregnant.

I can imitate nearly any accent and sound like a native speaker. (has been confirmed by people I’ve met from a variety of nations, and no, they weren’t just being polite to the goofy American.) I can’t speak French for sh*t though. I sound like Clark Griswold in “National Lampoon’s European Vacation”.

I can program in shellscript, it’s useful on very rare occasions.

I can tell when a u.s. currency bill is counterfeit with my eyes closed.

Not super useless since it has a few uses but I can open doors with my feet.

If I have my hands full and I’m not wearing any shoes or socks I usually do this method.

I am exceptional at going down stairs two at a time

I am weirdly good at skipping rocks.

Just did it a lot as a kid and now people get excited when I toss a rock and it skips 20 times.

When I start talking about food people start drooling.

Apparently I just start getting really descriptive about the things I like.

Came in handy when I was working as a waiter at one restaurant and a cashier at another. I was able to upsell more customers than anyone else.

Most of the time these days it is pretty useless.

You know that question “what is the sound of one hand clapping?”

I can answer it, with either hand.

I dunno, I’m pretty envious of some of those. The accent thing seems pretty killer.