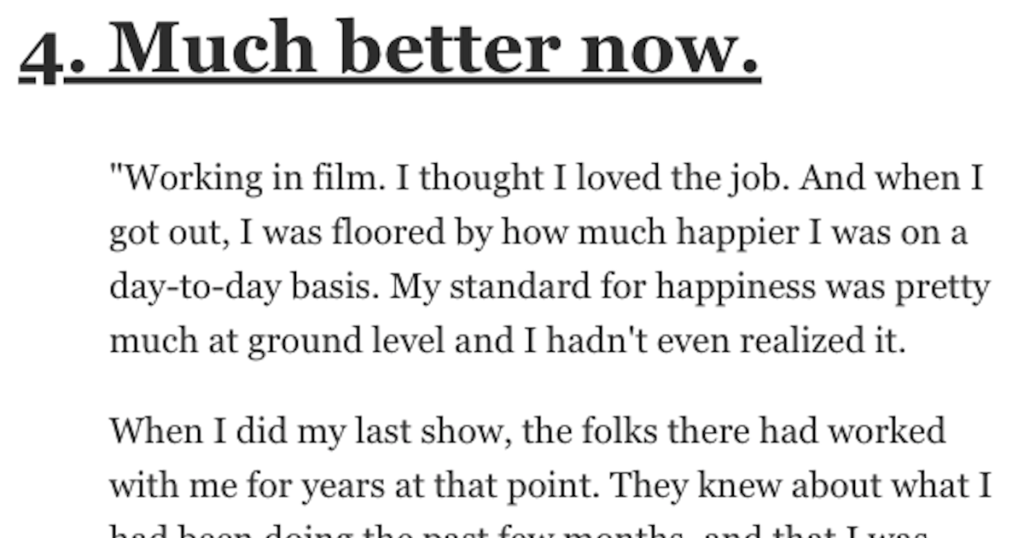 It’s funny how we view certain occupations when we’re young. Things that seem glamorous and exciting can actually be, well, kind of s**tty.

And it’s also interesting how our attitudes change after we’ve actually worked a specific job and not read about it or daydreamed about it.

But I guess you never know until you’re in the middle of it.

Folks on AskReddit talked about career paths that tend to get glamorized but are actually total nightmares.

Been in the business for 12 years. In the US, 8 hour days and paid overtime. In UK, I’m working 60 hour weeks, 13 hour days, on salary with no overtime.

My personal life has taken a nosedive and so has my health. The only time I have to go to the gym (a hobby I loved!) is after midnight after working all day. I don’t get scheduled breaks, and if I get a chance to eat, I’m shoving fries into my mouth.

For those who are interested in becoming a chef, it is not for the faint-hearted. Have a backup plan or some other marketable skills so you’re not up a creek if this industry does take its toll.”

“I don’t practice law anymore, but when I did I mostly did criminal defense and occasional civil cases. Almost all the attorneys I knew all had great professional lives and personal lives comprised of utter s**t.

Al**hol abuse was rampant. Drug use was frequent. I knew attorneys who had “pharmacy drawers” in their office that they consulted when they needed a specific remedy.

I knew a public defender who dropped d**d of a massive heart attack as he was leaving for court. One attorney I knew said he loved going to new restaurants because he and his wife didn’t have s** any more and that was his only real passion now.

“My sister just left her dream job as a Zoo Keeper so that she could go work at Petco.

Pays twice as much and has better benefits.”

“Working in film. I thought I loved the job. And when I got out, I was floored by how much happier I was on a day-to-day basis. My standard for happiness was pretty much at ground level and I hadn’t even realized it.

When I did my last show, the folks there had worked with me for years at that point. They knew about what I had been doing the past few months, and that I was choosing to leave.

Multiple people, including the show-runner and that episode’s director (this was a huge network TV show), pulled me aside to give their well-wishes…and to say that I was living their secret dream of escaping the industry. Blew me away.

Guys with esteemed Hollywood careers that I thought were in love with the job, shaking their heads quietly and saying, “if only I’d have got out at your age.” Any lingering doubts about my choice vanished that day.”

“Academia in general is potentially a garbage fire career path.

Namely because it’s so competitive that a lot of people burn out and become shells of human beings just from the stress and pressure of grad school and the job market.

A lot of people put pressure on themselves to end up in a top tier university when that just isn’t in the cards for everyone. So many people end up broken.

I’d just say that for anyone considering academia after a PHD, be ready to give a lot and get very little in return.”

“Being an architect is really bad.

Most people don’t complete it and the mental health issues are quite serious. There’s a lot of criticism and stress in the beginning, lots of late nights and hard work. At the end of the work you get insulted in public.

There’s no real reason for this. You aren’t going to be saving lives or anything, there’s no need to make it so expensive either.

So three years later, you get a degree and have to do a year of intern work, then it’s time for another year of study and projects and exams. Then two years of minimum wage work.

Then you come back for more exams, essays and projects.

It’s really too hard for what it is. I get paid very badly and I don’t really use any of my training. It was pointless really but girls like it at parties when I say I’m an architect. That’s a lie I don’t go to parties I have no social life.”

People talk about the fancy plane rides, expensive dinners, wild parties with your colleagues or a client. The reality of it is you’re never trully off work, always on-call like a surgeon.

Works weeks are usually 60-100 hours and can be brutal if one follows another.

It’s really more like working from 9AM-10PM in office and then get home to work another bit and have any given presentation ready stat.

I’ve gone all-nighters followed by client meetings where all I have time for is a quick shower and a 7/11 coffee.”

I spent a long time working towards a career in therapy, and I’ve noticed that a lot of new people/people looking to get into the field go in with the starry-eyed “I want to help people” mentality. I did, too.

You do help people, but it is f**king hard to help people. A lot of jobs are high stress/low pay type of deals, because a lot of the jobs available are through nonprofits that only have so much funding to go around.

You are vicariously exposed to other people’s trauma, and it does affect you, no matter how good you are at creating boundaries and practicing self care. It’s an admirable profession, but a grossly under appreciated one, and it most certainly isn’t for everyone who wants to “help people” for a living.”

You’re mostly putting a bandaid on issues. You go into it wanting to help people, but far too many people are ungrateful, not willing to help them selves, or complain no matter how much you’re trying.

I cannot tell you how many people have made threats even when you’ve gone well above and beyond for them. So many people abuse the system for freebies. I had people come in trying to get freebies who make over 100k a year.

The pay is always s**t unless you’re at the executive level. It is ridiculous how much executives make compared to the workers doing 90% of the work. The CEO of my organization makes well into the six figures while we have to work 3 years to get a 3% raise on our low salary.

They also devalue you constantly. You have people with master’s degrees working entry level positions being bossed around by some old lady with zero education but who’s friends with the CFO or something.

You’re constantly working with a ramen noodle budget expected to come out with steak and lobster results. 9/10 volunteers are only there because they’re trying to get hours or a reference and complain a lot.

You’re constantly battling other nonprofits even if you’re just trying to share resources. You can do completely different things and are just trying to refer clients back and forth so they can access all available resources, but they’ll guard their clients like gold.

The amount of shady practices that occur as well… Inflation of numbers, total lies, etc… it is really sad how many places do nothing or very minimal, but are glamorized as “doing good”.”

10. This would be very difficult.

I went into it with the naive belief I would be making a difference. I wanted to protect people and make my community safer. Instead, I got to see the worst humanity has to offer day in and day out. Lets see if I can list all the negatives:

Most departments are filled with arrogant assholes with inflated ego’s that love to condescend to other officers or the public when they themselves can barley read.

Many officers have severe anger issues and love to take it out on the public (never saw it happen physically but verbally or by issuing ever ticket possible).

Try to suggest changes to bring about better relations with the public? Prepare to be ostracized and bullied till you tow the line.

The overall level of incompetence is staggering, with some officers barely knowledgeable of the firearms they carry everyday.

Your view of the public and people in general becomes very dark. The amount of EDP’s (emotionally disturbed persons), druggies and alcoholics you deal with each day is ridiculous and you start to wonder how society hasn’t collapsed.

You arrest a violent offender just to see them quickly released over and over, whats worse is how many times an abuse victim files a complaint because you arrested their “love” despite almost being k**led.

Very few people are actually grateful when you cut them a break. They DO take it as a sign of weakness and try to push the envelope. This is an often overlooked reason why some officers become a**holes. You try to help people out and they spit in your face (sometimes literally), this gradually tears you down until you can barely recognize what you are becoming.

The uniform is a target. You can be the nicest most patient officer in the world but to many the uniform means you are the enemy. You will get cursed at, attacked and have your private life laid bare.

Low pay not even remotely commensurate with what you have to deal with.

There is so much more but I was lucky enough to get out and change careers before it all really got to me.”

People have no idea how much time, effort and resources goes into competing at elite levels of any sport/esport. It is soul-sucking. Think a 50hour work week is hard?

Nah fam, try living and breathing what you do. That’s why I h**e that people think talent is what gets you there, but in reality those people are just extremely dedicated to their craft.”

A lot of kids and teens want in it so bad because “I grew up playing games blah blah blah they take me to another world blah blah blah.” Then you become an adult and learn that it’s all math and physics, and making a video game has NOTHING to do with what you experienced growing up. It’s all black screens of code, polygons, and being criticized for your work.

What’s worse, if you make games you probably never have the time to play them anymore. The gaming industry is notorious for implementing 60-80 hour work weeks.

EVEN WORSE depending on what company you work for, you may never have stable work. You finish a project and then the company tells you “we don’t have another project for your particular skill set.” Then you gotta look for more work.

AND IF ALL THAT WASN’T BAD ENOUGH, you’ll probably never work on a game you want to work on. All those big, fancy games and indie darling on Steam are a very small fraction of what exists. Barbie’s Horse Adventure? Those people got degrees and we’re inspired by the same games as you.

Crappy Candy Crush knock-offs? Same degree and inspiration. Stupid table-top games that you only see in the family section at Walmart? Those also utilize game designers/programmers.

Now we want to hear from you.

How do you feel about this?

Talk to us in the comments and let us know!