People Are Saying The Word ‘Boomer’ Is A Slur, But That’s Not Right According To The Dictionary

Unless you’ve not been paying attention (and yes, there are valid reasons for not keeping up with what’s going on with the internet these days), then you’ve probably heard that generational relations have broken down between Baby Boomers and Gen Z (and Millennials, to some extent).

Gen X is not involved, because that’s the way they like it also the world is on fire so who cares.

It began when Taylor Lorenz wrote a piece about how teens have begun to reply “Ok, Boomer,” when older people make clueless remarks about the world today, or how kids are doing life wrong today, or both. All of the above.

Soon afterward, Buzzfeed did a tweet roundup in order to compare the tweets of the two generations, and the author of the piece was inundated with emails from angry Boomers.

Among the responses were a disturbing number of people claiming that “Boomer” is a slur for a “minority group.”

Replace the word “Boomer” in your article with ANY minority group using a slur for that group (somehow Boomer has become a slur) and YOU WOULD BE FIRED.

I don’t really have a nickel in the “ok, boomer” dime, but imagine thinking “boomer” was the world’s first ageist slur. pic.twitter.com/vt4qLj3tV2

However… and actually seriously… more than one person is saying this. 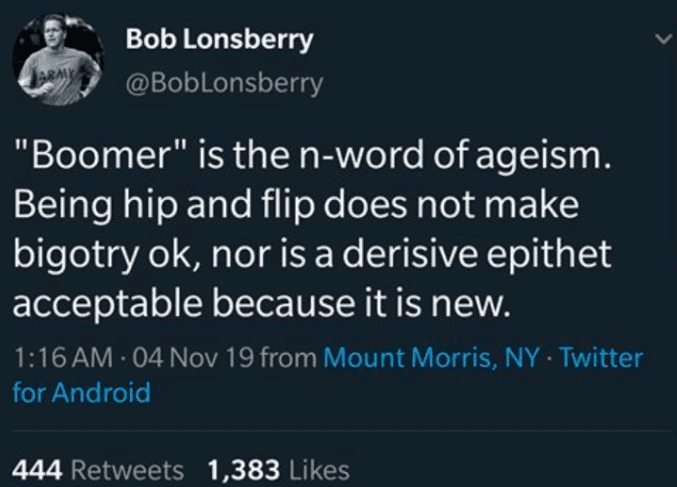 Luckily, the actual Dictionary stepped in to clear things up – because some people need to learn what the word ‘slur’ means, and also this entire conversation circles us back to the crux of what started the battle to begin with.

To sum up: Boomer is not a slur, and everyone should spend more time listening and less time talking.

Boomer is an informal noun referring to a person born during a baby boom, especially one born in the U.S. between 1946 and 1965.

The n-word is one of the most offensive words in the English language. https://t.co/30OAf7N83e

Also, if you write articles on the internet like I do, you might need to occasionally tape pot holders to your hands ala chicken-pocked Phoebe in Friends.

If you want to keep your job, I mean.

Which I do. Because I’m a poor non-Boomer.