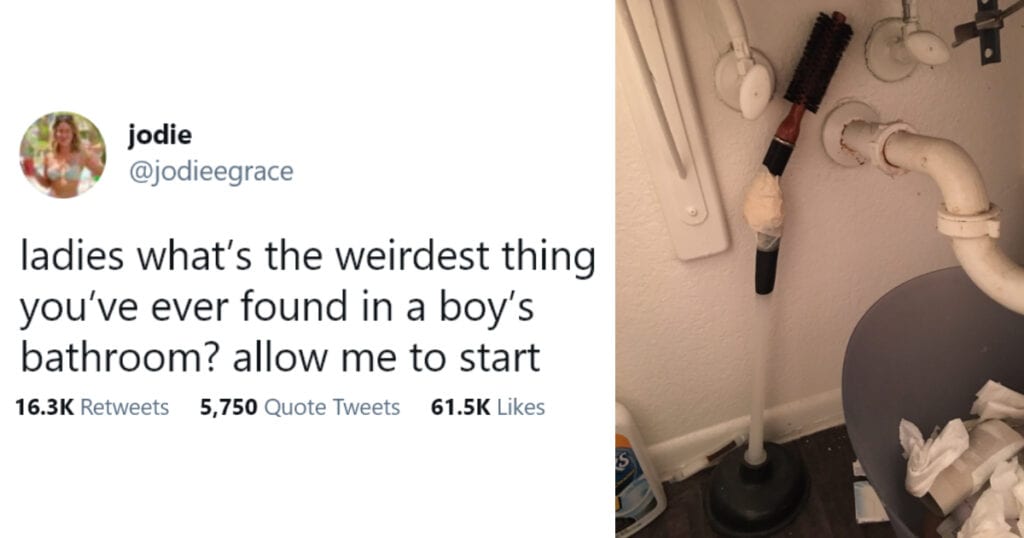 Twitter user @JodieeGrace may or may not have known what she was getting herself into when she tweeting the following revelation/prompt:

ladies what’s the weirdest thing you’ve ever found in a boy’s bathroom? allow me to start pic.twitter.com/WbvwM86H4b

Far from being an isolated incident of weirdness, responses on Twitter began to pour in by the thousands. You may think you know the sort of thing you’re about to see, but trust me, you probably don’t.

Some were text descriptions while other provided photo or even video receipts, some were from private homes while others originated in public bathrooms or shared dorm facilities. No matter where they came from, the message was clear: we guys gotta get our s**t together when it comes to bathrooms.

Some kid out there very nearly understands how a toilet works.

Not a girl (obviously) but I am an elementary school teacher and my first week of school this year I found a zip lock bag in a urinal full of pee.

Actually nevermind, I’m pretty sure I don’t want to hear it.

Why was somebody eating in the bathroom and how sure are you that that was soup?

soup splashed on the wall, and crap on a toilet paper dispenser. my school isn’t a very clean environment

It’s hard work, but somebody’s gotta do it.

A huge sign above the toilet that said CITY DUMP

Been sitting here for as long as I can remember now.
I may literally be getting too old for this s**t.

A poo diary. I shit you not. Pun intended.

I get the magazine but why the country cro-oooooooh.

My ex kept a playboy and a tub of country crock under the sink.

“My lights are leaking.”
“Are you high again?”
“Yes but that’s irrelevant.”

This is gonna put me off my dinner, I swear.

Ah the glorious life of a pilot.

my dad works at american airlines and he says in the men’s bathroom some guy makes a town out of boogers on the stall??? like he takes his boogers and makes pictures out of them like ????

Well, that’s enough of that. You only get one set of eyes in this life.

What’s the weirdest thing you’ve seen in a bathroom?