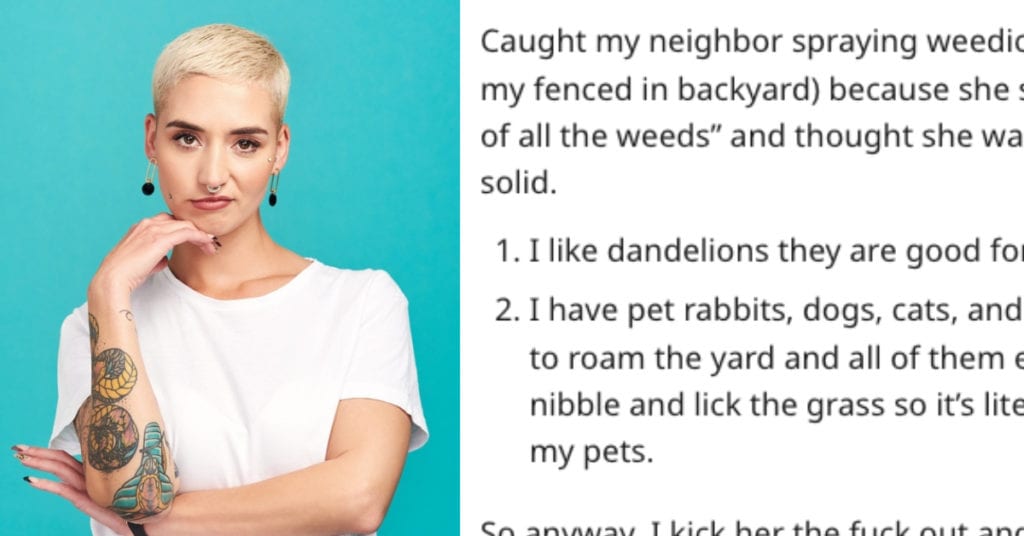 Was This Lawn-Obsessed ‘Karen’ Responsible for Killing Bunnies? The Internet Has Opinions.

Nightmare neighbors can range from an unwanted annoyance to the reason you leave behind a dream home. The only thing worse than a neighbor who you find irritating is a neighbor you’re worried might be actively endangering you or the things you care about.

That, apparently, is the situation that Reddit user tdog945 found themselves in when they took to r/AmITheAsshole to get some perspective.

AITA? Suing my neighbor after she sprayed weedicide on my lawn

Caught my neighbor spraying weedicide on my lawn (in my fenced in backyard) because she said “she was sick of all the weeds” and thought she was doing me a solid.

I like dandelions they are good for the bees

I have pet rabbits, dogs, cats, and a tortoise i like to roam the yard and all of them eat or at least nibble and lick the grass so it’s literally poisoning my pets.

So anyway, I kick her the fuck out and take all my pets inside.

Now 2 of my rabbits are dead and another is in critical condition. I’ll never be able to let my pets outside again to eat the grass because weedicide takes forever to go away because it can sit in the soil for who knows how long and Im worried that the dogs and cats might end up having a reaction too since they also nibble the grass (call me overprotective or over cautious IDC I love my animals)

So I’m suing her for: damage to my property because it is now unusable for my animals, veterinary bills, and emotional damage due to the deaths of my two rabbits.

I’m also trying to get the cops to pursue a case of animal abuse or at minimum criminal damage because she did basically poison my animals but I doubt anything will come from it because I have to prove ill-intent but they are pursuing her for criminal trespass.

She’s a Karen. I think she deserves it for thinking she had any right to be on my property at all; and especially because it’s killed my pets and now Idk what to do about my lawn because I’m not risking another animal’s life by letting them out (at least unsupervised for at least a year. However my parents and my girlfriend think I’m being unnecessarily cruel because it “was an accident and she thought she was just being a good neighbor, and that Im making it to be a bigger deal than it is” and should just ask for her to pay my vet bills.

So, what did Reddit think? Was OP in the right, or was the girlfriend correct in saying they’re turning this into a bigger deal than it is?

The answers were overwhelmingly…

Yeah, no, that Karen is wrong. 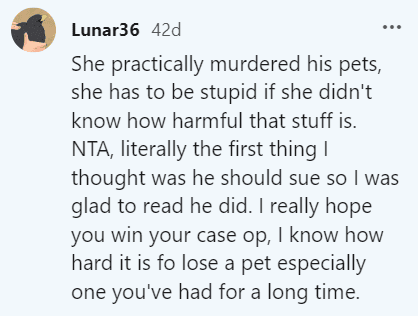 Apparently this is something that happens a lot. 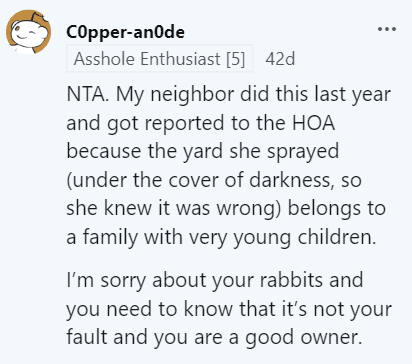 The basic tenant of “no trespassing” certainly seems to apply. 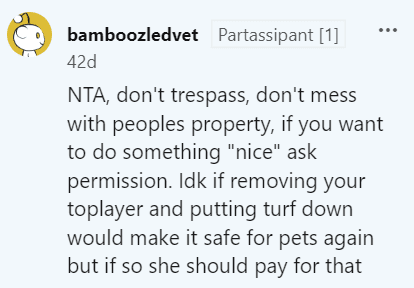 OP got a lot of love. 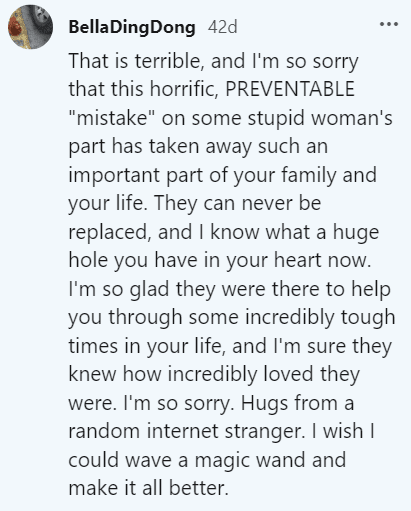 Many believed a lawsuit was indeed the right way to go. 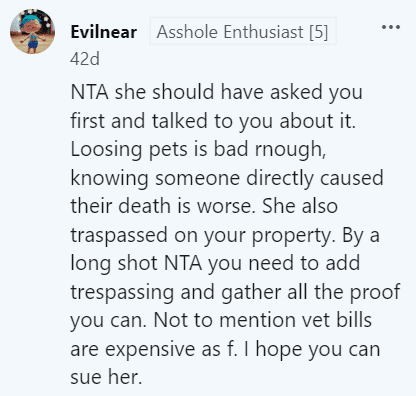 Always expect the unexpected on r/AmItheA$$hole. 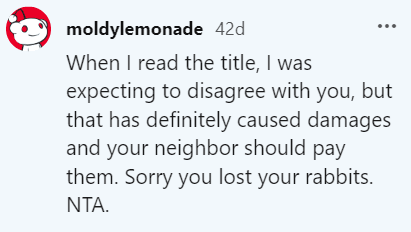 Literally get off my lawn, said all. 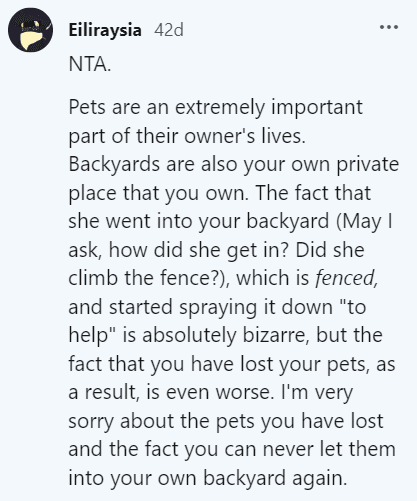 Nobody was buying that the neighbor had no liability here. 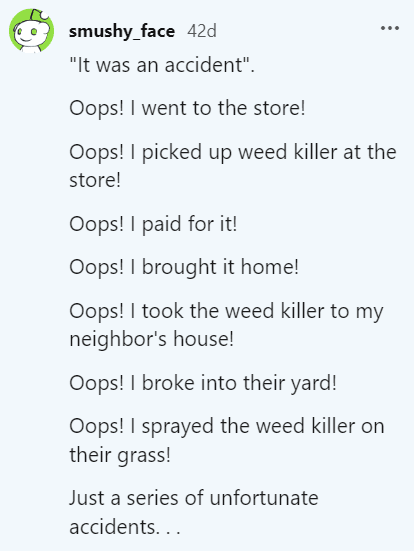 Beware people who do “nice” things for their own purposes. 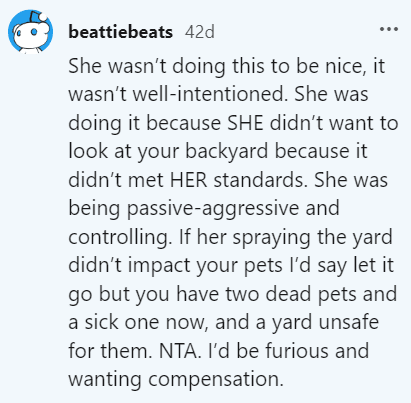 However…not everyone was sure OP had the cause and effect right. 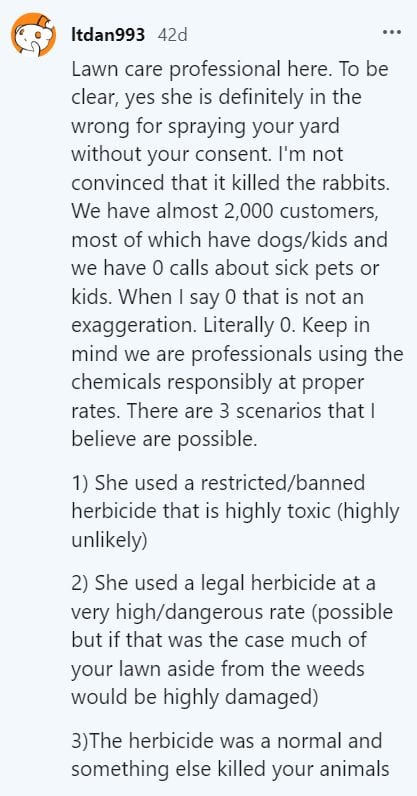 It’s hard to say in this case whether or not the neighbor was truly responsible for endangering or killing OP’s pets. When the thread got closed down they were apparently awaiting some kind of toxicology report to confirm. Either way, I think we can all agree, don’t go screwing with other peoples’ homes.

But what do you think about all this?