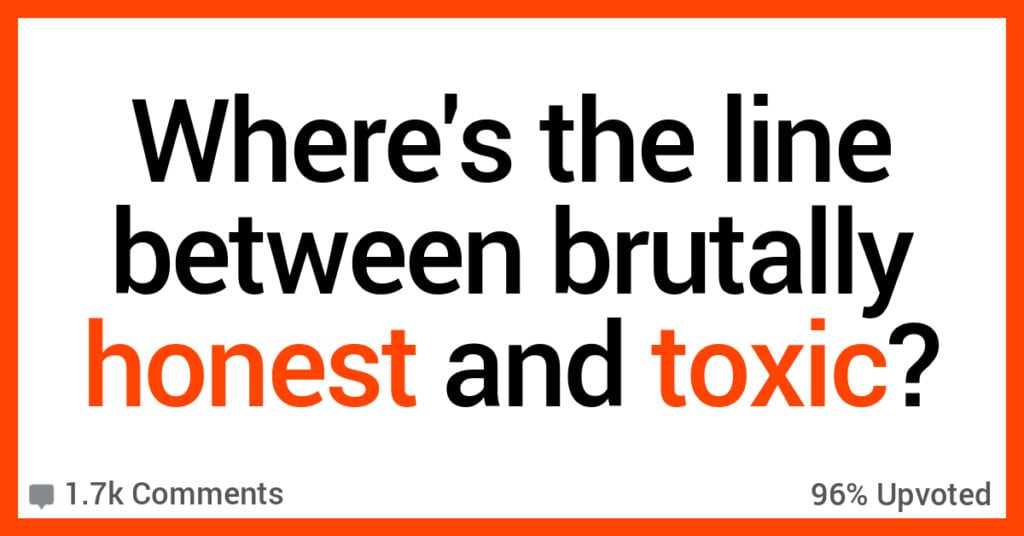 Where’s the Line Between “Brutally Honest” and Just Plain Toxic?

We’ve all got at least one “brutally honest” person in our lives. Or perhaps even we identify that way. But how often is that label used as a smokescreen excuse for being insensitive, inconsiderate, or just plain cruel?

It’s a difficult question which was explored in depth in this thread on Reddit:

What’s the line between a brutally-honest friend and a toxic friend? from AskReddit

Utilizing the wisdom of the crowds, here are a few questions to consider when evaluating whether you or someone you know might have crossed the line into toxicity.

1. Are they reveling in it?

A toxic “friend” takes obvious pleasure in shocking you with information they know will hurt.

An honest friend directly tells you what you need to know, even if it’s not what you wish to hear.Z

2. How do they phrase things?

Honest friend: “That’s awesome that you got to the final round of interviews but you might want to apply to other jobs just in case you don’t get it. The job market is really competitive right now.”

Toxic friend: “there’s no way you’re getting this job, there are probably tons of people way more qualified than you.”

Are they “brutally honest” with you in public? Pointing out your flaws in front of others as if they’re trying to embarrass you? Toxic.

Are they pontificating about your “flaws” almost as if they were saying “being you? wrong, be more like me”? Disregarding the intricacies and differences of both of your personalities? Toxic.

Are they someone who is willing to also tell you good things about yourself, which is also honesty, or do they only focus on the negative?

Do they take responsibility if they cross the line, or do they not care and insist that you are being too insensitive?

Because if it’s any of the latter, then they are a toxic person. In the end, if you really have to ask, then you probably know the answer already.

A non-toxic friend will respond to critical feedback that their “brutal” honesty is not welcome, and they will tone it down accordingly.

A toxic friend will completely ignore such feedback, or worse may even step-up their behavior out of spite.

6. How brutal is brutal?

I remember reading once that often “brutally honest” people get off on the brutality, not so much the honesty.

7. How is your time together spent?

The toxic friends will always be toxic. Constant complaints, or comparisons. Twisting words or steering the conversation towards negativity, or being the center of attention.

If you can’t remember the last time you just “had fun” together, they’re a toxic friend.

a brutally honest friend will say something and usually start with ” look, i dont want to say this but it has to be said” and then hit you with a brutal truth bomb… such as “your a proper d*ck when your drunk” or ” i dont like your girlfriend, i think she is using you” (these are from personal experience)

I think “brutal honesty” is more often an excuse on the part of the friend to justify a lack of tact. “Don’t blame me, I’m just being brutally honest.”

A good friend – or even just a reasonable human being – should generally be able to be honest and direct without being brutal. They might not (and often shouldn’t) beat around the bush, but should realize that there’s room for tact and grace, even (especially) when they’re saying something their friend may not like.

So if someone would rather be “brutally honest” than tactfully honest and direct, they probably are already toxic.

Exceptions apply, of course. But the only one of can think of is when tactful honesty has been tried and failed.

A toxic friend will only point out the bad, usually to make them feel better.

Most people who self identify as “brutally honest” use it as an excuse to be an *sshole.

I would say when anyone uses phrases like “I’m just brutally honest” “I tell it like it is” “I don’t sugar coat things” it’s a red flag.

So I feel kinda stuffy and lame using a paraphrased principle from (allegedly) from Socrates, but this is where I draw the line:

Either way, I generally steer clear of “brutally honest” people, because that phrase usually means I won’t take responsibility for my own antagonism.

One can’t be with you when you’re happy

Honest friend: You need to stop putting “vape” as a hobby on your resume.

A lot of things to look out for there. Personally, I’ve never considered “brutal honesty” or “speaking your mind” to be virtues in and of themselves. Sharing one’s mind is only a net positive if said mind isn’t full of garbage. We shouldn’t welcome hate in honesty’s clothing.

But what’s your opinion on this?