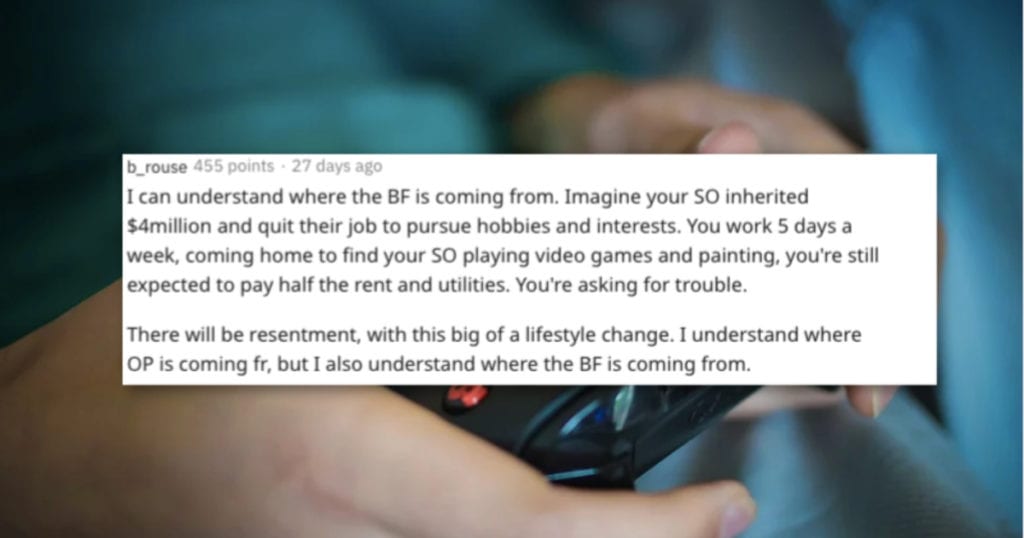 It’s never easy to know how you would react to a sudden, massive windfall of cash. This woman, who posted her story on the subreddit Am I The A**hole, said she never expected to inherit anything from her grandfather after his death, assuming it would go to her mother, and certainly not $4 million.

That’s what happened, though, and now she’s wondering whether her reactions as far as expectations for other people are correct, or totally off.

AITA for telling my boyfriend he isn’t entitled to my inheritance?

My grandpa passed away a few months ago and I inherited a little over $4 million from his estate. I had no idea he had that much money and was honestly not expecting to receive anything, as I assumed it would all go to my mom.

After I got over the initial shock, I took the opportunity to finally quit my job (which I really hated), as I don’t have any outstanding debts and can easily live off of $40,000 a year. I’m pretty introverted and am more than happy to stay at home working on art/music/other interests and gaming.

Ever since I inherited the money, my boyfriend has been pressuring me to cover all of the rent and utilities (about $1200 a month) for our apartment and start putting money away into a joint savings fund. I would be happy to do this if we were married, but we’re not. We’ve only been dating for a year and a half, and I would prefer to keep our finances separate. Despite not working anymore, I still pay my half of the rent every month and have started paying for a housekeeper to come in and clean a few times a week, so our apartment is nearly always spotless and looks great.

I told my boyfriend he isn’t entitled to my money and he said I was being selfish for expecting him to still contribute to the rent when I could easily afford to pay for the whole thing.

Her boyfriend thinks that, since she’s got all of this cash, she should use it to cover all of their rent and utilities every month…

And maybe put some into a new joint savings account, too…

They’ve only been dating for a little over a year…

And she prefers to keep their finances separate.

Her boyfriend is peeved, but is she the a**hole?

Most everyone on Reddit agrees that she’s definitely not the a**hole.

Many, like this poster, also wonder if the two of them could have a future together.

And think that the boyfriend is pretty not cool for assuming her lifestyle change will extend to him.

Others, though, wonder why they’re not communicating better as a couple who are living together. 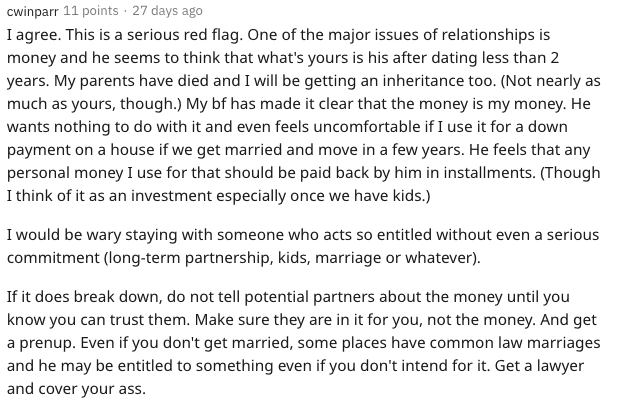 And think that OP is also a bit of an A**hole for just restructuring her entire life without consulting him.

Either way, this couple seems like they’re not destined for forever if they can’t find a way to level the playing field and work this out – and while I don’t think the boyfriend was right, I do think OP is acting weirdly in expecting him to act as if nothing had changed.

Where do you fall? We’d love to hear your take in the comments!