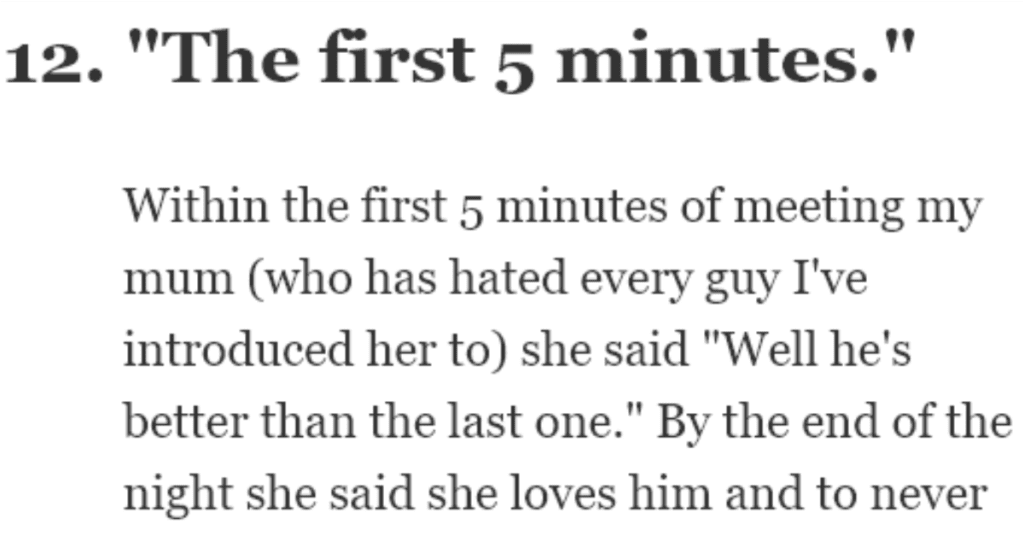 Women Reveal How They Knew They’d Found the Right Guy

We hear a lot about the red flags that signal a horrible relationship – but what about the green ones?

What about the ones that give us that special assurance? The kind that keeps us going?

Those of you Redditor’s in happy, healthy, and fulfilling relationships, what were the “green flags” you noticed about your partner early on in your relationship with them? from AskReddit

Here are some selections from people of Reddit who just knew they’d found the right guy when they saw these green flags waving.

1. “Fearlessly les me have my feelings.”

I was able to express my emotions and thoughts to him without his getting angry or judgy.

He fearlessly lets me have my feelings without trying to change them, we talk them out and it feels so much better afterwards. I feel like I could tell him absolutely anything, so the trust between us is more solid than I’ve ever had with anyone else.

He enabled me to face my fears, not by pushing me but by being the ultimate “safe space” enabling me to take emotional risks and grow mentally. Right from the beginning I could trust him totally.

I never once checked on him, worried about him cheating, or felt that jealous uncertain churning in my stomach. This was very new for me at the time and hasn’t changed.

After 20 years of marriage he still accepts me 100% yet makes me want to be a better person.

Genuinely incredibly grateful all the time that we found each other when we did (early 20s) and we get to spend so much of our lives together.

We’d been dating for about a month, one day out of the blue he turns to me and goes “I could take apart and clean the drain pipes under your sink if you want. I noticed the sink is a bit slow to empty”.

That’s when I knew he’s a man who wants to build something with me.

I grew up in an angry, volatile home. Anything could make the “adults” snap and go on a rampage.

When my then boyfriend, now husband, and I came home to find a major leak in the bedroom ceiling, which had leaked all over the bed and caused significant damage, he just flatly said, “Well, s**t.” And called the building manager.

No screaming, no throwing things, no blaming anyone, just a calm acceptance and then action to rectify the problem.

We’re going on 16 years married and 20 years together.

5. “He helped me pack everything.”

He drove 2 hours on his birthday to pick me up when my mom abandoned me in a parking lot, brought me home, and sat with me while my parents and I tried to talk things over.

My stepfather started screaming obscenities at me for no real reason, he helped me pack everything I owned in his truck and I moved in that night.

After dating for two months. It’s been two years, and we got married last month

The first time we had sex I got my period and didn’t realize until we were done and I went to the bathroom to pee. It wasn’t a ton of blood but I know it was enough to have gotten on him and the sheet. I walked out of the bathroom and he was standing in the doorway of the room and said something like “is everything okay? Did you get your period or something?”

And then we both smiled big and started cracking up and he was totally cool and sweet. The next morning he invited me to go sheet shopping with him because he “needed new ones anyway and wants me to like the ones he picks”.

That was about 9 years ago.

7. “No judgement or expectations.”

He comes from a very different background to mine, I love theatre and museums and galleries. He’d never even been to a show. He made a point of taking me to do everything I loved doing, even when it was weird to him. He also invited me to rugby matches and cricket games with him to learn about what he was into.

And lastly, I’m a veggie, so he started ordering plant based meals when we were out (I love sharing food because I hate picking one thing from a menu), and learning to cook food I can eat – no judgement or expectations to change.

S** was not transactional.

I also don’t get tired of being around him. I could hang out with him all day and night for weeks on end and never need a break, he’s my best friend.

When I saw how supremely unselfish he is. He does things for people with absolutely no expectation that anyone return the favor to him, he just does things to help people.

He really is a special person. I’ve never met anyone like him. I always hoped someone like him existed but kinda thought it was a dream to think that. To find someone who loves me for me and who I feel is just my equal partner is just the bees knees.

We were driving one day and in a split second, he drove off the road, ran out and stopped 5 lanes of traffic to let a family of ducks and their tiny babies cross the road. No hesitation.

You bet I put a ring on that man. 14 years and counting.

He wanted me to talk about my feelings. I’ve never done that before and when I said I don’t know how to he made a point of talking about his feelings then asking me how I felt about it.

4 years later and I’m getting really good at this feelings thing and I’ve never been more happy to be alive, and that’s saying something in 2020.

Within the first 5 minutes of meeting my mum (who has hated every guy I’ve introduced her to) she said “Well he’s better than the last one.” By the end of the night she said she loves him and to never let him go.

Having people around you notice how happy you are with them and the change in yourself is crazy and enlightening. I knew I was happy but I didn’t think it was so noticeable to some people who I very rarely see.

When I was helping him move apartment a couple of months into the relationship, and I accidentally threw out something very sentimental and important to him.

When we figured it out almost 6hrs later, instead of getting mad and upset with me he understood that it was an honest mistake and made a plan to get the items back (which involved going to the security officer of the building at 2am and digging through a dumpster full of garbage until we found them!)

His apartment that he lived in alone was clean and neat and looked like a home. Like, not that “I just cleaned the place for the first time in months” look but “I’m a neat person in general” look. He’d also made a lasagna from scratch for our date.

For me, the fact that he was a grown man, living on his own and he knew how to keep his place clean and to cook was a green flag. This was not a man I was going to have to “mom” or argue about the disparity of chores.

My ex husband was the exact opposite so it was a breath of fresh air.

My son was two when my boyfriend and I got together, and after a few months he met my son. He didn’t warm up to him in the first couple of months, and it really weighed on my boyfriend.

After I put him to bed one night, my boyfriend was quietly crying and told me how concerned he was that my son just didn’t seem to like him. I explained that since his bio dad was never around, he didn’t have a lot of men in his life, and I think he saw him as competition.

Fast forward to now, my son is six, and they’re inseparable. My son considers him his dad, and we’ve talked about my boyfriend adopting him when we get married.

Heartwarming stuff through and through.