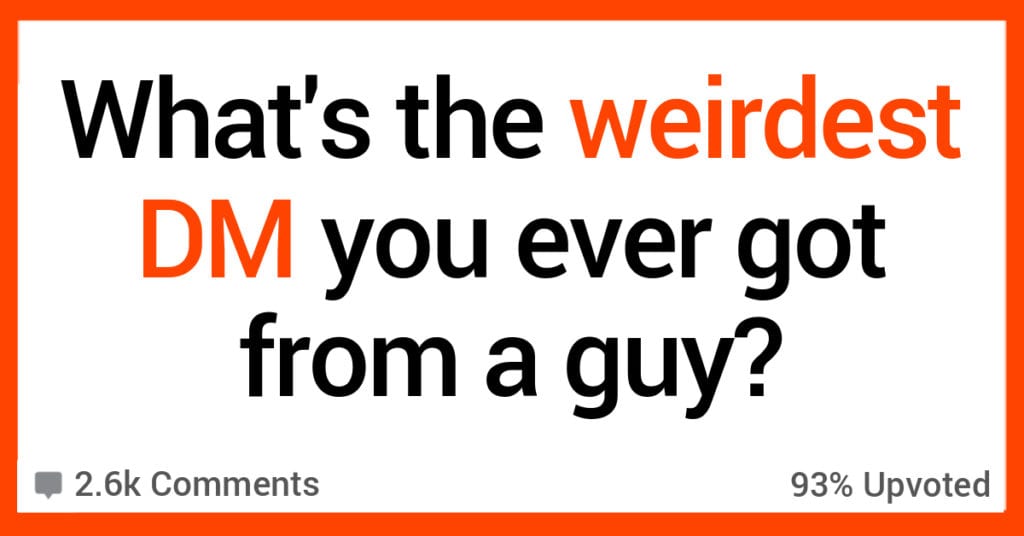 Fellas. Bring it in. We need to talk. Specifically, we need to talk about the way we talk to women/people we’re attracted to, because this is like…CRAZY out of hand.

There is an absolutely bananas thread on Reddit right now that starts with this prompt:

Ladies of reddit, what was the weirdest dm you ever got from a guy? from AskReddit

It sadly comes as no surprise that there are thousands of responses, each more bonkers than the last. Check out just a few of the weirdest that floated to the top (probably goes without saying, but, many of these are very NSFW):

1. All in the Family

From a guy in Spain who has the same (uncommon) last name as me: Hey, I think we are cousins? I hope not, I’ve always wanted to f*ck an American.

Will you marry me? – from my college boyfriend of 1 day

“send floor pics” said some male from discord. Stared at the DM confused, and politely denied him, but he follows it up with,

“I just like nice floors, several states allow beastiality yet I’m in the wrong here?” I still don’t understand

I just got a message the other day from a guy asking me to send him ten grand immediately.

Yeah ok, typical Nigerian Prince sh*t… however when I told him he was a f*cking idiot for thinking anyone would actually do that, he hit me with a d*ck pic.

I was NOT expecting that. It’s like the two most annoying types of messages you can receive combined.

A guy sent me a video of him spreading his *ss cheeks.

Every time I blocked him, he would make a new account and do it again.

Don’t know who he is and doesn’t show his face.

One of those dms that was describing a scenario, but straight off the bat. No hello, how’s it going, just…

‘I unlock the door. You’re standing by the stairs, looking angry. “What time do you call this! Your dinner is in the trash!’ you shout. I put down my keys and stride towards you. I grab you by the hair and lead you upstairs. I lay you down and take off your pantyhose. You giggle as you let out a pungent fart. It fills my nostrils and…’

I have never blocked anyone so damn fast.

In a relationship app, I received messages from several men offering me a green card.

“Do you ever wear heels to class so that people can see you toe cleavage?”

I’m a guy, but I got DMs for a short while by a guy who claimed he knew I was a girl and I couldn’t fool him.

Eventually I blocked him.

“Do you have genitals”

I responded no, I’m a eunuch.

We dated for a couple of months.

“Hey baby, Why don’t you come over and give me a good sucking with that mouth of yours. Here’s my snapchat” and then proceeded to send me a rickroll link.

In case any of my fellow…fellows haven’t gotten the point yet – DON’T BE LIKE THIS. Talk to people like they’re people. A little flirting is fine but this is not a competition to see who can say the weirdest thing. OK? Like. Chill.