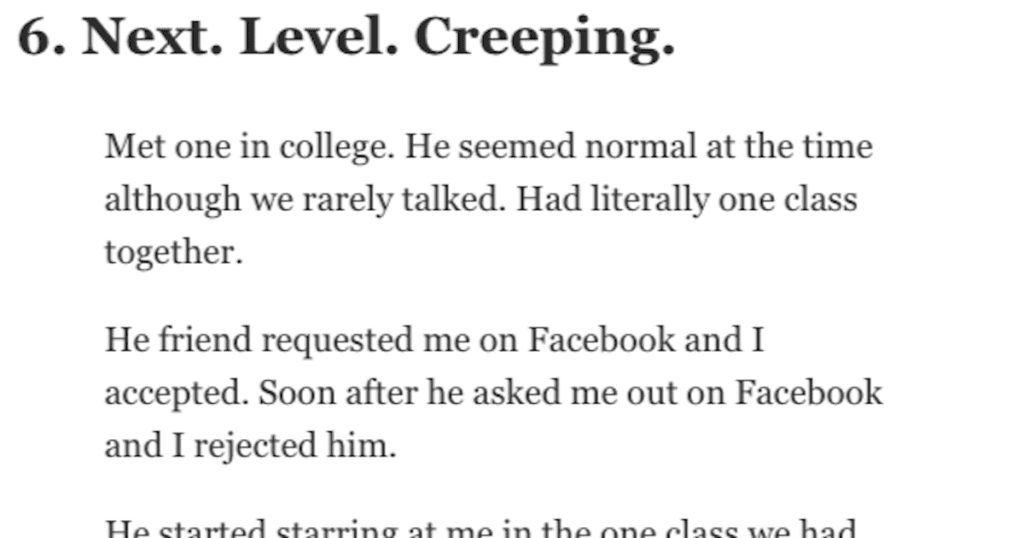 Every second, somewhere on the planet, a DM is slid into. The content of these flirtatious messages ranges from the charming to the banal to the ABSOLUTELY HORRIFYING, as evidenced by the posts in this Reddit thread:

Ladies of reddit, what was the weirdest dm you ever got from a guy? from AskReddit

We’ve gone through and selected some of the creepiest ones to show just how off-putting some dudes can be. But be forewarned, a lot of these are disturbing, and definitely NSFW.

1. Guess this guy was dead serious.

“you would be f*ckable even if you were dead”.

2. Some of these dudes are like weird Victorian vampires.

That he loved my fair skin and the fact I looked FERTILE.

3. There were a lot of stories about online groups gone wrong.

I was in an online DnD group, and the only female, as well as the youngest.

I was fourteen, and the oldest player, who was 27, would regularly flirt with me while we played but I let it pass (and even was flattered by it) because it was in character.

Until he messaged me saying how he would stare at the only picture I’d ever sent the group (which was of my dice, and featured some of my hand) everytime he masturbated, and that he wished I could be his pet.

Yeah,, blocked and left the group.

“Will you please mail me a box of your toenail clippings. I would be honored to chew them.”

He wrote out how he saw our entire future together, including meeting each other’s families, moving in together, getting married, buying a goat, getting pregnant, having a miscarriage, nearly divorcing, then mending the relationship and growing old together. Then he asked if I would consider going on this life journey with him.

I would not. I blocked him immediately.

Met one in college. He seemed normal at the time although we rarely talked. Had literally one class together.

He started starring at me in the one class we had together and followed me around a lot.

One day I got a text from my mom telling me I should check my Facebook. I maybe looked at it once a day at the time.

He had commented on every single post I made, every picture, anything on my wall. Literally everything he could.

Every comment was different too, but all some variation of how I’m a slut. How all I’m good for is to please a man and produce his offspring… if he finds me worthy.

He planned it out well I think I because the semester ended the week before. Which was good for me I guess, didn’t have to see him anymore.

I blocked him then deleted my Facebook. I was rarely using it anyway. He put so much effort into those comments, hundreds of them. Just weird.

7. Not here to kink shame but…have some tact, damn.

I got a guy who asked me if I would use his face as a toilet.

Not introduction, no build up, just that.

“I’m coming to (your state) can I stalk you?” I mean credit for asking before stalking but c’mon…

9. There was this would-be revenge fantasy…

Had a guy that used to patronize the gas station I worked at message me asking if I had any interest in him.

I said I don’t have any interest in anyone, especially since he has a girlfriend.

He basically explained his plan was to cheat on his girlfriend because he “walked in on it and got to see it happen”.

So instead of leaving, he was going to try to convince me doing the same to her was a good idea. So gross.

a guy wanted to pay me to send him a picture of my nose. the dude had a nose fetish but he was also very specific about dimensions.

he wanted the pics with a ruler to show that the nose is only a little bit more than 1.5 inches wide.

11. Further evidence of the point above:

“Will you step on insects and film it for money? Here’s an example video”

12. There are times it crosses over into credible threat territory.

Started getting DM’s from some random guy telling me that he ‘hopes my family dies from corona’ and calling me a ‘low IQ r*tarded b*tch.’

When he started telling me to ‘go back to where I come from’ and messaging ‘cao ni ma c*nt,’ I put together that he was a racist targeting me for being asian because I have the Vietnamese flag in my bio, which he mistook it for the Chinese one.

Not a DM but I once recieved a 2 page poem that described how distracting my breasts were and how he wanted to smear Cheeto dust/Cheetle on them to lick off.

I had known the guy for a couple months?

He will forever be known as either Poem Guy or Cheeto Guy to my friends.

“Your smile is so lovely. If you were a vampire, I wouldn’t even be afraid of you biting my neck later”

15. From creepy to criminal real quick:

The next message was “I want you as a soulmate” and when I said I was underage he said things like “age is just a number” and “I don’t care” and “that’s okay”.

I get creepy men in my dms all the time, so I have a folder of screenshots from them on my phone.

That last point is actually a really good idea. Keep records of these things. They’ll likely come in handy, especially if you find you need to protect yourself from one of these guys. Everybody stay safe out there, and on behalf of dudes, let me just say…sorry we’re so weird?