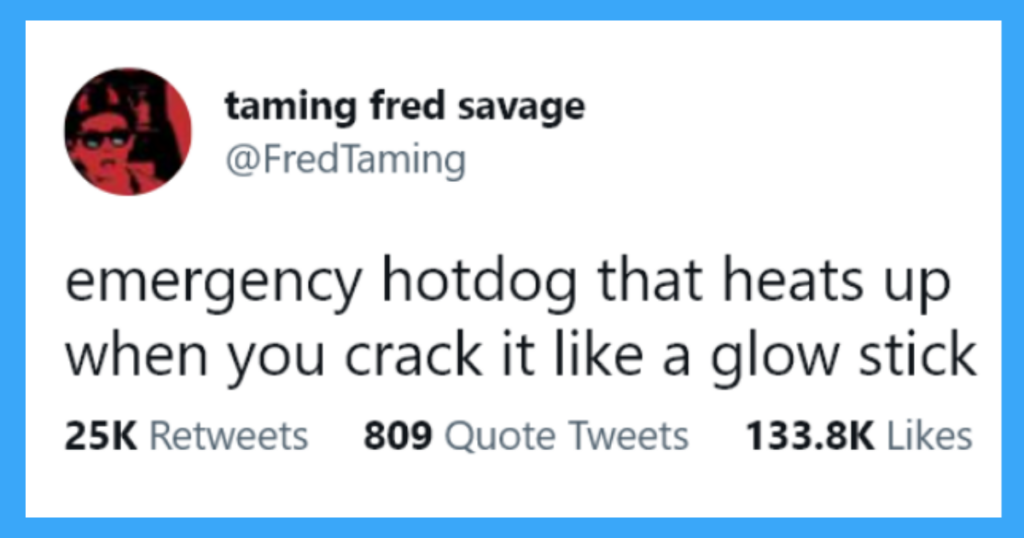 10 Hilarious Sentences That Have Never Been Said Before, or Since

They say that if you set infinite monkeys at infinite typewriters, they will eventually produce the complete works of Shakespeare.

It wouldn’t surprise me to learn that the entire endeavour of the internet has been set up specifically to test that idea. After all, we’re monkeys (apes, anyway), sitting at our keyboards, in multitudes, typing endlessly. And while another Shakespeare arguably has yet to arise, we’ve certainly produced a lot of interesting works, including a few sentences that you’d really never expect to occur.

These are such sentences, via Twitter. Study them well.

When kindness isn’t about morality – it’s about competition.

Someone very kindly bought me lunch three years ago and I am hell-bent on buying that person lunch as soon as possible to even the score. I think I’ve invented the “friendetta.”

I value this human panini at 5% of my net worth, thank you very much.

a weighted blanket is $70. I have $1400. I am about to panini press myself into incredible sleep.

Nobody enjoys these – their purpose is hangover curing and socially acceptable day drinking.

There is something unnatural about that stuff. It’s like they’re trying to make me think cheese is a fruit or something.

Babybel cheese, the unblinking red eye of a demon god, a cheese so powerful they cage it twice: in wax and then catch it in a net. "Murder me," it screams, "peel off my skin and eat me." Baby hell cheese.

I guess we really DIDN’T know what was in those things after all.

If that’s what it takes to not cook the planet, then fine.

With plastic being banned, Starbucks is running out of things to put drinks in. A year from now they're gonna scream my name and I'll have to drink my caramel iced latte straight from the barista's cupped hands while another employee strokes my head like a scared horse

I can still imitate the full sequence pretty well.
It was a song we all knew and dared not sing.

Kids these days will never know the beautiful sounds of dial up internet. It was like listening to a chorus of angels getting hit by a garbage truck

A valuable lesson in what names will do.

Unbelievable how much diversity resides within Tom Hanks’ balls. pic.twitter.com/CcFPCk3DBu

We’re all in this now.

But for real though, throw me in the ocean, idgaf.

There we go, friends. We did it. We said things nobody ever needs to say again.

Do you have any unsaid sentences?