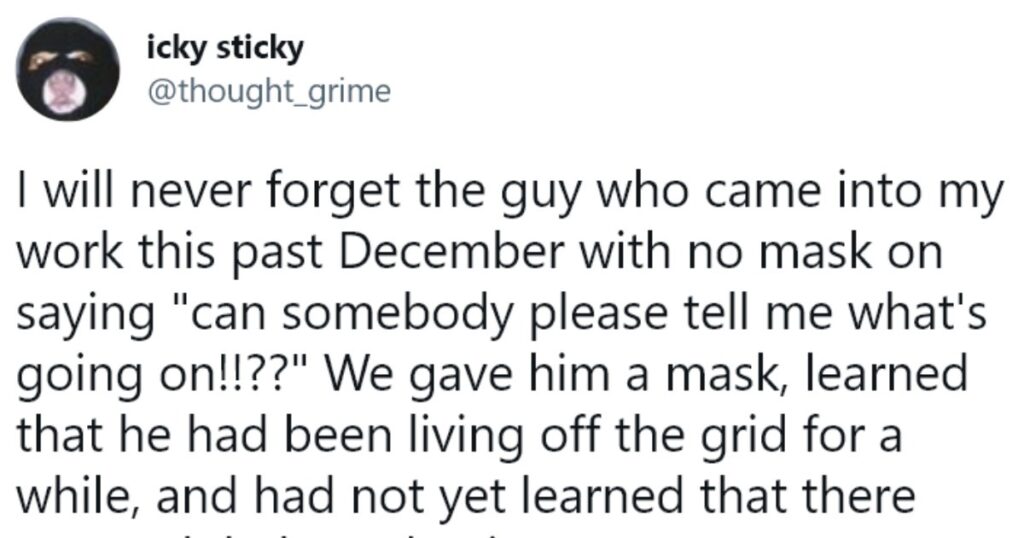 You’ve probably heard the story of Rip Van Winkle at some point in your life, and if you can’t remember the details, you’re not alone.

Most people are familiar with the concept of the character who slept for a long time (20 years, in fact) and woke up quite confused.

What you may forget is that this story, by Washington Irving, is placed in time so as to make Rip miss one very particular event: the American Revolution.

What’s it like to suddenly realized you’ve missed something huge? These Twitter stories step out of fiction and give us the real low-down on the phenomenon.

I’ve heard variations on this story many times, still not totally sure if it’s true.

Reminds me about the story of the Japanese soldier they found living in a jungle cave in Guam in the 70’s. Didn’t know WWII had ended.
28 years!!
I shit you not.

Hope you enjoyed your place of peace, because everything is awful now.

I once met a guy who’d just left a Buddhist monastery he’d lived in for ten years in almost total isolation from the outside world.
Trump had just become president a few months earlier and he was so confused at the state of things.

7. Wake Me Up When September Ends

Welcome back, it’ll never be the same.

An old friend and his wife went camping deep in the woods of Washington around September 4, 2001 and returned around September 18, 2001. They stopped for gas, looked at the newspaper box, and then turned on their phones to a changed world.

This one is more cute.

I was doing a semester abroad in the late 90s when the first state quarters came out. I remember when a cashier handed me a couple of weird quarters and I was like “whoa, what the hell?” She was right away like “have you been away?” And I was like “yup”

I was backpacking for a month in 1991. Came out and the Soviet Union had suffered a coup

I heard this album playing ad nauseum from my sister’s room.

Less serious but just as confusing: Went to Russia for 2mo in 1996. Stopped in Dublin on the way home; it was plastered w posters “HANSON! THE! HOT! NEW! AMERICAN! BAND!” I told everyone, “This is a joke, no one in the US knows who these kids are.” Flew into ATL & heard MmmBop 😱

Man. How cut off are you in there?

I remember asking Siri something on a drive with a family friend who’d just gotten out in 2012, & thinking about how wild that must have felt coming out to smart phones. She’d gone in when everyone had landlines on top of flip phones because service was so expensive & unreliable.

Wait, was he up there for like two years?

My uncle was hiking in New Hampshire for all of Watergate. Came down from the mountains to wait for his ride home, and saw Air Force One landing with the voiceover saying “when that plane lands, Richard Nixon will no longer be President of the United States.”

Aaaaand I’m back to sad again.

My moms bf had a heart attack when he was on a roadtrip and lost a lot of his memory at the time. When they came back through the airport he was so surprised at the metal scanners and extra security, only for my mom to have to tell him about 9/11 and all the school shootings.

Well, this has been an eye-opening bummer. Which is my new band name.

What’s something that weirdly passed you by?