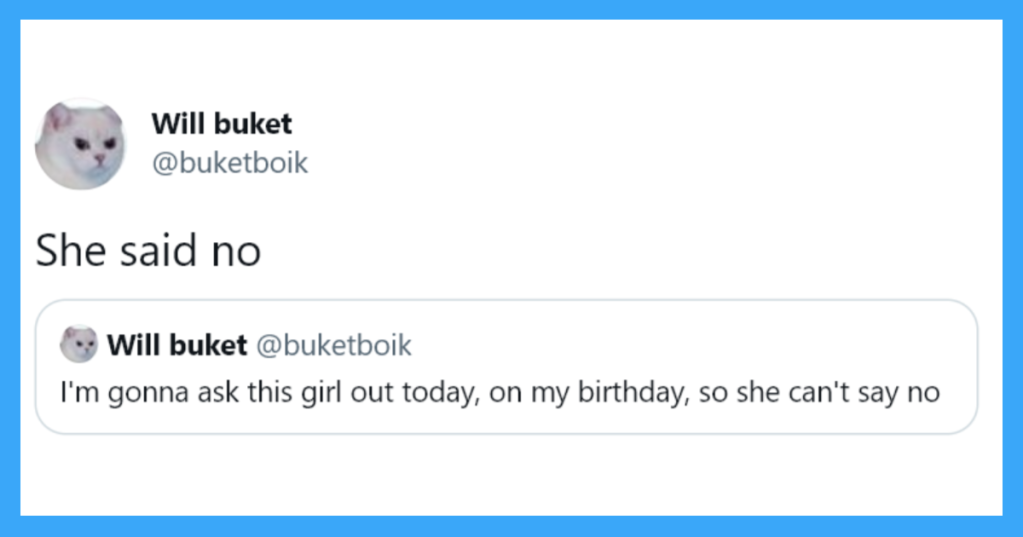 10 Times That Life Just Said No

A lot of life is disappointment. We don’t have to dwell on that, we don’t have to make it our whole thing, but we do need to acknowledge it and accept it.

Sometimes, a lot of times, life just looks at you and in no uncertain way just says “no.”

These tweets, which are full of struggle of all varieties, illustrate some of the things life might tell you no about.

10. No to understanding math

And if you only made $1 but you worked for a million hours, hey ho look who’s living on easy street.

All the 15 an hour is gonna get you is… your hours are gonna be cut.

Better off making less but working more hours off with.

9. No to having real friends

Candy bars are my companionship now. They are all I will ever need.

These two bastards are the only thing keeping me going pic.twitter.com/sDq0cRyPxA

8. No to learning to cook

There’s something about this that’s not very a-peeling.

Maybe the problem is that you are actually, in fact, a cat.

6. No to being treated with respect

This is the photo she pulled up, she can fall out of her wheelchair next time she has surgery pic.twitter.com/GHiz6Dp8uf

5. No to proper grooming

And I do use that word purposefully.

so it turns out I've been using dog shampoo on my hair for the last few months. (I only discovered it when I ran out and needed to get more.) this is partly my own fault but it doesnt help that @ArmandHammer has the word "pets" in like 4-pt typeface. I'm guessing this is common pic.twitter.com/GMe6C4etYW

4. No to getting the girl

And hey! You were also there! So that’s something!

i was in my friends tiktok and some girl commented “omg the first three boys are so cute!”

can you guess who the fourth boy is

3. No to having money

I literally did this exact same thing and now I STILL can’t cancel without losing the 90+ songs I’ve now paid for without downloading them and ARHGHAGH.

just realized i never cancelled my adobe stock trial and have been paying 30 dollars a month since january pic.twitter.com/4vdkpsYu94

It’s probably better off this way for everyone.

uncle txted my mom saying that my grandpa dropped his phone in the toilet, proceeded to take a shit on it without knowing and when he realized it was there he tried washing it off and putting it in the fucking oven to dry. i cannot make this shit up

And as we all know, that’s the only thing that matters.

When life gives you lemons, give ’em back. You’re not here to play those games.

What’s a way in which you’ve been told no recently?