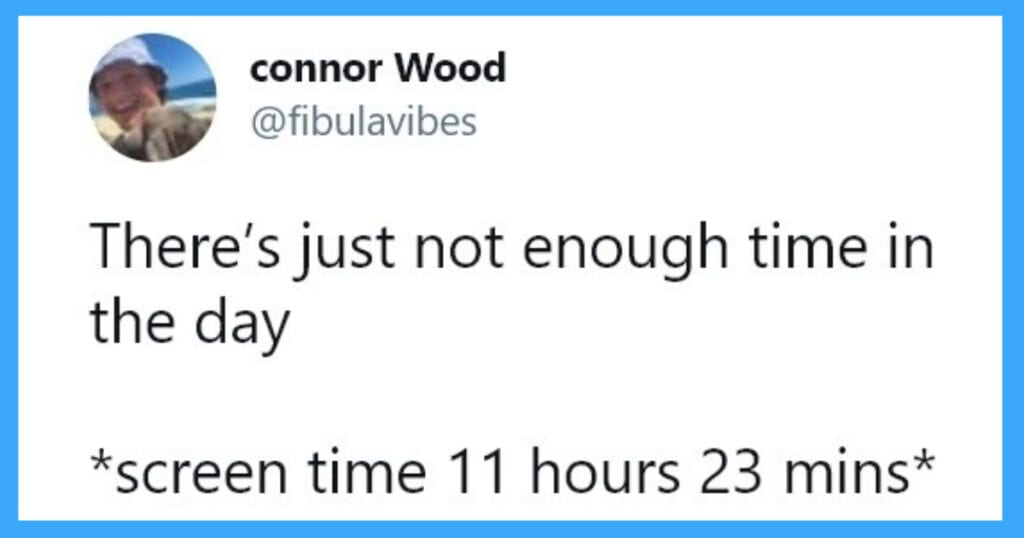 There are all kinds of apps and even built in OS features on phones now that will break down exactly how much you’ve been looking at the thing and in what capacities and for what purposes.

Tracking screen time seems to be a very weird thing our generation is into. We gather this information, we treat it as though it means something, we monitor it as though to ensure we are moderating, but the truth is, we do nothing with the data obtained.

Except keep looking at it. And marveling at it. On a screen.

In the spirit of that, how about you keep looking at your screen a little longer today and enjoy these funny tweets from nowish!

Hey it’s more calories than some people get in a day in this world.

“yeah i ate”
the food : pic.twitter.com/tNbElB3OT9

I wonder what he’d think of the whole goth vibe that he inspired.

Scientists: if we don’t act fast, the ice caps will only keep getting hotter

These are getting out of control.

And the band played on.

tfw you’re about to see the ship make contact with the side of the canal pic.twitter.com/W93LTA1C8U

It’s really what he had meant to write all along.

RIP Shakespeare you would have loved She’s The Man

I wouldn’t be surprised if he’s been behind pretty much everything.

“To save their company, Cinnamon Toast Crunch needs to make cereal classy again, and what’s classier than shrimp?” pic.twitter.com/pXs2RgZh5c

You are a monster and you need to go to prison.

Ate half my sandwich prolly save the other half for later pic.twitter.com/WEJIOKZplj

I was a grown man when I saw this and it still terrified me.

There’s just not enough time in the day

And with that, it’s time to stop looking at this particular screen and start looking at a different one. You know. For my health.

What’s your screen time like? Do you actually do anything about it?