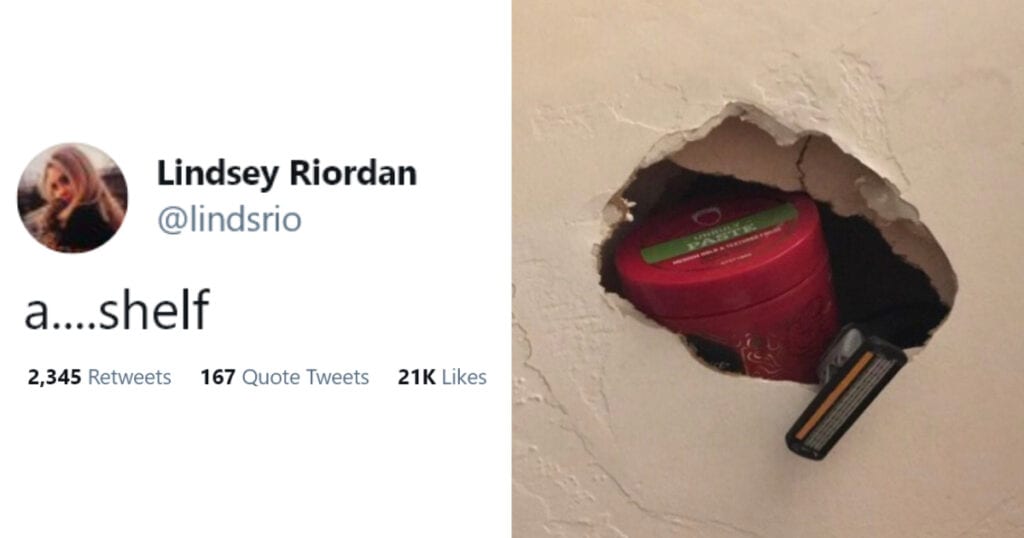 11 of the Weirdest Things Found in Guys’ Bathrooms

Guys have weird bathrooms. I already knew this, as a dude who’s done my share of odd bathrooming, but I didn’t know it as hard as I know it now that I’ve scrolled through this tweet thread.

The horrors and oddities you will find here can never be unseen, so be warned. Be they from a house, apartment, dorm, school, or just a plain ol’ public men’s room, the things shown and described here defy all reason and are sure to leave you changed forever… to some degree.

But if you’re curious still, scroll on. And see what Twitter hath for thee.

For those keeping score at home, this would appear to be some ungodly hybrid of a plunger and a “toilet” brush.

ladies what’s the weirdest thing you’ve ever found in a boy’s bathroom? allow me to start pic.twitter.com/WbvwM86H4b

I cannot fathom how this is working.

broken shower rod held up by a condom 😩 pic.twitter.com/e0QSIS4jXy

We’ll have no bones about it.

I have no words pic.twitter.com/q6fklsmjdf

You were so busy trying to find out if you could do it that you forgot to ask if you should.

This is my boyfriend’s shower curtain. It’s even more terrifying when you go pee in the middle of the night pic.twitter.com/JCQ066K3YL

He is clearly trying to think something through, please leave him be.

The juice is most definitely loose.

was on his bedside table. I still had it on when he came out of the bathroom, he said he made it bc he always gets distracted when he reads. He made himself blinders for reading. pic.twitter.com/tZze8YlCu5

We’ve found it. We’ve found the single most “Kyle” photo that will ever grace the internet.

I have so many questions and I want none of them answered.

Went to look in the bathroom cupboard for toilet paper and…… pic.twitter.com/UAPPHJcesu

My companion, my second, my number two, if you will.

I may never poop again.

What’s the weirdest thing you’ve seen in a bathroom?