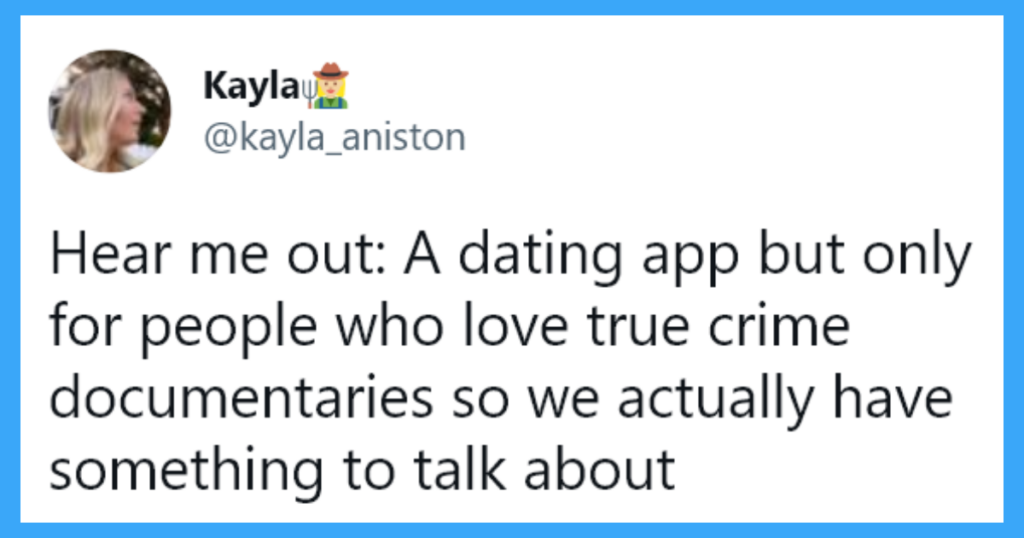 11 Tweets for People Who Can’t Get Enough True Crime

This genuinely isn’t an ad or a sponsorship or anything, but Hulu’s Only Murders in the Building feels like the kind of show that was delightfully inevitable and took a surprisingly long time to get to us.

It follow three unlikely friends, bonded together by their love for true crime, and the secrets they themselves keep.

It’s basically the fantasy of all of us who find ourselves playing amateur sleuth listening to / watching hours and hours of true crime mysteries. And if you’re the kind of person who can’t get enough of that, then you’re gonna love these tweets.

*Sigh* Yeah. You wanna watch another one?

2019: you watch serial killer documentaries for fun? What’s wrong with you

2021: that new Night Stalker docuseries was a great escape from the doom & gloom

And by that I mean, I’m literally going to watch people shine lights on exposed human hearts.

Are you a meat lover, or a meat murderer?

A true-crime murder documentary, but it’s just about me brutally devouring a large meat-lovers pizza all by myself back in 1998.

Despite all my rage, I am still just a rat in a cage.

I rage clean while listening to murder podcasts because if we are being honest the two seem related.

The trouble with the true crime craze is that in reality, most unsolved crimes are unsolved for a really good reason.

They think I’m zen listening to some kind of music.
They have no idea.

Me listening to a true crime podcast while a Walmart worker loads groceries into the back of my vehicle pic.twitter.com/uy08YQwNmc

Don’t worry everybody, I’m sure I’ll have this before morning.

Me at 3am trying to solve the JonBenét Ramsey case pic.twitter.com/WKmaw97myE

Just don’t smile in vacation photos in general, people who do that always seem to turn up dead.

I've seen enough episodes of Dateline to know never to stand near a cliff while letting Hubs take my picture.

You gotta get that terror / snuggle ratio just right.

"i coulda whooped Ted Bundy's ass" I mutter to myself from under 3 layers of blankets as I shove my 5th consecutive mega stuffed oreo in my mouth and readjust my beanie hat which has teddy bear ears on it. I take a sip of sleepytime tea but it's too hot, so I gently blow on it.

Hear me out: A dating app but only for people who love true crime documentaries so we actually have something to talk about

1. If looks could kill

I think you should fire your sketch artist.

Sorry but no wonder they couldn’t catch this man… #NightStalker pic.twitter.com/Ym3BYdCHBR

What mysteries will we fail to solve next…no one knoooows…