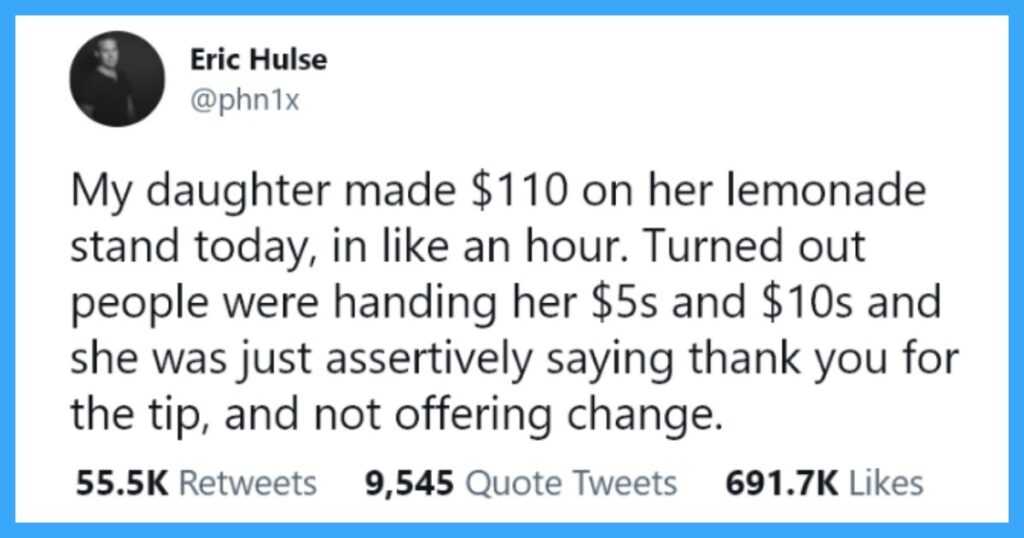 13 People Who Are Absolutely Not Messing Around

Sometimes, you just gotta stare the world in the eye and see who blinks first.

It will inevitably be you, of course, as the world does not in fact have eyelids, but still – you’ve made a statement holding out as long as you can.

When you do this, you send a message out into the universe, and that message is “I’m not messing around.”

A vibe definitely shared by the subjects of these tweets, I tell ya what.

Is this a part of your “brand” or are you really just super mean?

This note that arrived with an Etsy order is… the greatest thing that’s ever happened to me. WTF Peggy. pic.twitter.com/tiHmOQ1dq4

The future is now, old man.

my daughter was wearing a flannel hoodie so I said “hey, the 90’s called” and she replied “yeah cause they couldn’t text” and godDAMMIT I’m getting really tired of my kids owning me

Dad I’m not sure you appreciate just how difficult it is to get a job right now.

told my dad i got a new job and this is his response? 🥰 pic.twitter.com/8rROnxI3wH

He is chaos incarnate. He is the night.

I can't believe I married someone of the male species. Look at the shit I have to deal with. pic.twitter.com/WBMr7OwOGZ

Hey! My dog is walkin’ here!

Guy in the pickup honking, yelling at woman to move out of the street. She yells back "my dog is shitting, wait a minute!"

Imagine changing your major because you needed your caffeine.

Why is this happening. What started it. What do they hope to resolve. I have so many questions.

No need for an alarm clock at my Nanna’s house this morning when you have plank wars going off at 8am pic.twitter.com/rJH37JiKox

6. Just keep to yourself

You can’t possibly have the last name “Johnson” and imagine you’re not going to run into another.

There shall be only one Maureen Johnson on Facebook, and I guess it will be this other one. pic.twitter.com/cUrn6xTXLU

It ends when there’s no nose, all ring.

When will it end pic.twitter.com/laLwDcR6ly

The audacity of a landlord trying to charge you AFTER you’ve left.
What are you gonna do? Kick me out?

My apartment really just tried to charge me $955 for moving out 20 minutes late.. I walked straight to their corporate office, and pulled the “my lawyer will be in touch with y’all soon card” and 3 minutes later the charge was dropped… I ain’t even got a lawyer 🤣🤣🤣

This has the angriest of white boy energies about it.

You made the right choice.

How it started: How it ended: pic.twitter.com/ywh2dobB74

1. When life gives you lemons

You exploit them for all they’ve got.

My daughter made $110 on her lemonade stand today, in like an hour. Turned out people were handing her $5s and $10s and she was just assertively saying thank you for the tip, and not offering change.

That last one is genius.