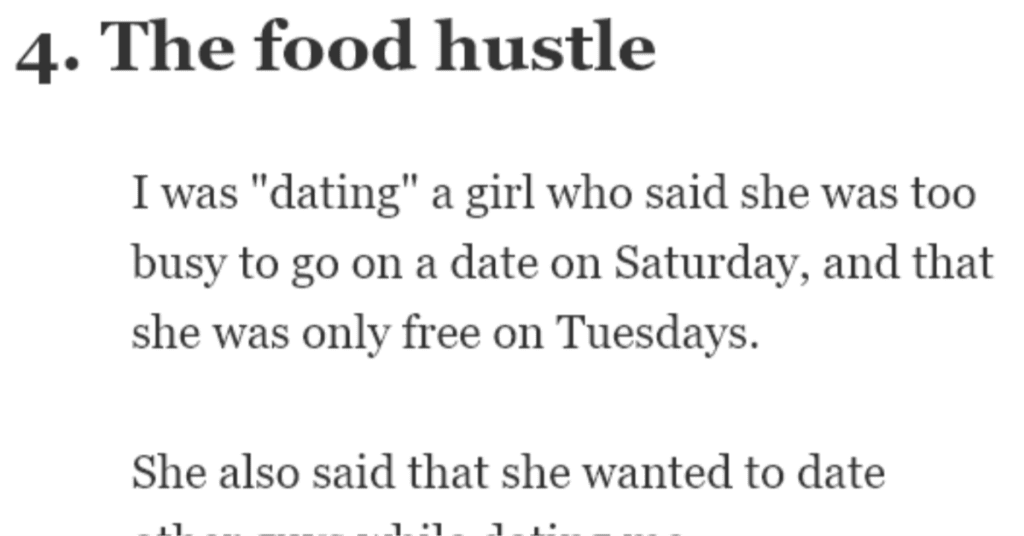 If you clicked this link, it might just be a subject you’re vaguely interested in, or maybe you were scrolling around and killing time on the train, or MAYBE you’re in a relationship that you’re worried about, and you want to see if the signs are there.

In that last case, hold onto your hat, because this list is probably not going to make you feel better.

Guys, What’s a good sign that a woman is just using you? from AskReddit

Here are the big red flags to look out for, according to Reddit.

There’s a big difference between asking how someone is doing because you actually care, or because you just want something.

I had a friend who I talked to daily for over a year who very rarely checked up on me, even when I clearly stated I wasn’t doing alright. The only times she did check up on me was when SHE was having a rough time herself and wanted support. Eventually I just slowly withdrew from her, and even uninstalled Snapchat, our main source of communication unfortunately, without telling her.

Now on the other side, I have one friend who I talk to very rarely, but she will frequently (maybe every month or so) shoot me a text out of the blue just asking how I’m doing with life and all. She seems genuinely interested, and tends to call back to the last times she checked on me to see if I’ve improved/worsened since then. It’s not much, but she definitely makes me feel like I’m worth something. And it’s definitely the BEST trait a human can display.

Got out of a long relationship that turned into this just 6 months ago.

Would sit and moan, whinge and kick off about the most infinitesimal things for hours but when even serious issues came up in my life like my brother attempting suicide, her response was “well he’s an a**ehole anyway”.

Have had people tell me “I can’t be there for you in any way, shape, or form, but I don’t want you to leave.”

And, for the double whammy, “I can’t handle you leaving right now. You’re making me angry that you brought up your issues. You can’t come to me for things like that. You knew I was upset.” All while crying/sobbing to make you feel bad.

I was “dating” a girl who said she was too busy to go on a date on Saturday, and that she was only free on Tuesdays.

She also said that she wanted to date other guys while dating me.

She later admitted that she was cycling boyfriends through the week for free food. I dropped her like a bag of moldy tangerines.

A girl once called me her “happy pill” a nickname her therapist created cause I genuinely made her life so much better but she cheated on me anyway, My friend told me that you only take a pill when you need it and i’ve lived by that and use that as a filter for all my relationships

I missed all the signs until she literally said “I’d leave you if we’re not rich”.

I’m not a man, but I’ve known too many not-so-great women and have had guy friends used by women, so I think I can chime in here a little.

She asks about your bank account and your job often and says she’s “just wondering!”

She gets unreasonably mad when you forget a holiday

She makes ‘deals’ with you using her body; “If you buy me this, I’ll suck your d**k in the car”

She lies constantly about her own financial situation or personal relationships

She doesn’t thank you for things, but rather expects them

She never pays for anything herself

She guilt-trips the life out of you

She is unreasonably, explosively defensive when you voice your concerns regarding the relationship

She uses her emotions and body to get what she wants from you.

MAKES you feel like you need to spend more time/money on her w/ her.

She doesn’t understand the word NO.

When she flirts with you all the time, and also everyone else, and asks you to come over to do complex electrical work and says she’ll take you out to dinner, and you agree because you like the work and like being around her, but she brings her kids along and ignores you the entire time.

Then when you’re not around her she never texts or calls and just waves at you when you pass her at work every day, making no effort to talk to you whatsoever. And when you try to talk to her she gives you short answers like “Yeeeaaaaah”

If she doesn’t really seem all that into you but chooses to go out with you anyways and she’s getting something out of it(food, materialistic things… Etc)

If all of the problems you have in your relationship all of a sudden become your problem.

Recently got out of a relationship with someone who I thought I was gonna marry someday, but then little things like me saying “I just wish once in a while you’d make sacrifices in your schedule for me like I do for you” and I’d always hear “I never asked you to do that for me so that’s your problem”

they will use their pain against you, making you feel like s**t.

Often they will make you feel bad for them or feel guilty. The goal is to make the guy sympathize with them as well as show vulnerability.

For example, the guy might catch himself thinking “she’s going through a rough time and everything will be better soon.”

They’ll try to isolate guys from friends, hobbies, and family if they can get away with it.

If said girl is the only person they have, they’ll stay even when things get really bad.

I have a way to test this based on my experience.

Flirt or hug her in front of her friends, if she’s not really interested in you, she won’t want her friends to think that she is, so she’ll reject you.

Randomly off and on, affectionate then distant, hot and cold, easy signs she’s using you for comfort when things are off with other guys

Yeah, I’d say those are all things to avoid.

Have you had experience with this sort of thing?