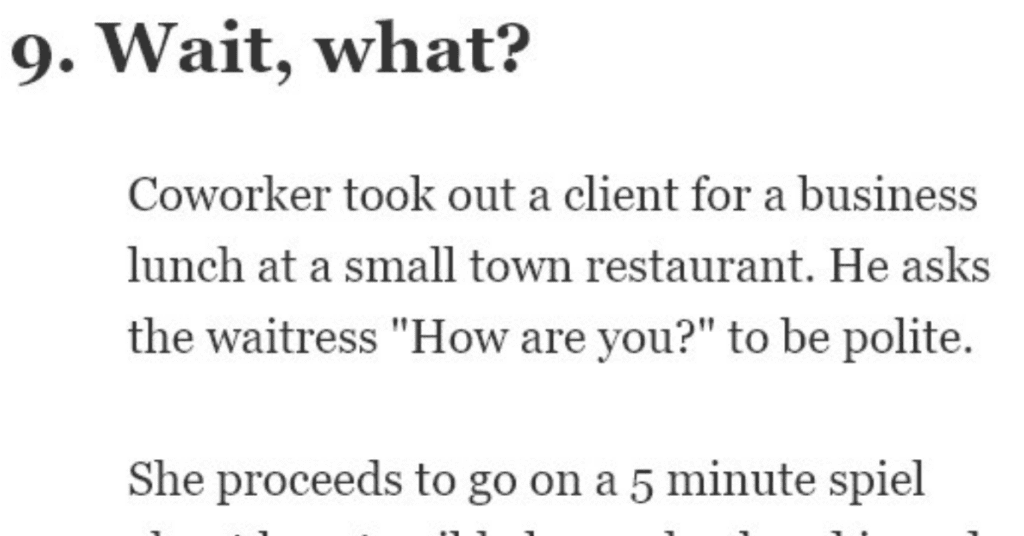 15 Stories About the Art of Oversharing

I once had an unforgettable conversation in the parking lot that connected a comedy theatre where I regularly performed to a series of restaurants and stores.

I was on break, heading to the grocery store to pick up a snack, when a fairly wild-eyes but strangely engaging gentlemen stopped me to talk.

We were maybe 20 seconds into this thoroughly inscrutable chat when he said,

“I’m David. I’m an assassin. Had a target. She had it coming though.”

“She thinks it’s gonna be equal pay for women that fixes it?” he asked incredulously, “No way. You love women, right?”

It was around then that I remembered that I was really very hungry and redoubled my efforts to get to the grocery store.

What’s the most fucked up thing someone has told you about themselves after barely getting to know them? from AskReddit

But I’m not the only one who’s had these strange encounters. Here are a few more, via the people of Reddit.

My sophomore year In college a girl who I had a group project with told me that her first sexual experience was getting tag teamed by a couple of guys while she was in high school.

She told me that she loved it and then I changed the subject. Until that point nothing sexual had come up in the conversation.

On a first date with a girl she leaned in and whispered ” I f*cked two guys last night. Obviously consecutively, not at the same time, I’m not a wh*re.”.

After that, we had a nice, perfectly normal conversation until she had a couple of drinks. At that point, she leaned back in and said “I’m completely shaved, do you want to see?” and promptly lifted her skirt to show it. When she did, she said “I never wear underwear, they get in the way.”.

After I talked to a few friends, including the one who set us up, they all said that she was desperate to be the center of attention and slightly crazy.

My wife loves to tell this story.

Her first day at a new company she was to meet another employee who would show her around the office. She met her in the lobby and on the elevator ride up to the office she proceeded to tell my wife how her husband has gained some weight and she is considering starting an office affair with a co-worker who is really into fitness and ‘has muscles’ (apparently she made a gesture where she fanned herself while saying muscles)

Like literally my wife met this lady 5 minutes earlier for the first time in the lobby and she is already unloading all this stuff on her.

Randomly Met a fellow motorcycler at a gas station at 2am, told me he was going to confront his wife and her lover. Not right then, just in general.

Then we rode the last hundred miles to St Louis because he happened to be going the same way.

I was seated next to a quiet kid on a high school band bus to a football game. He’d been in my band class for years, but I had never really spoken to him. He was the type who didn’t fit into anything at school that I ever saw.

I resolved to get to know him a bit and open up a conversation since we were going to be sitting by each other for a few hours. It was like a dam burst; that dude talked for the whole trip.

At one point, he told me that his mom was really unhappy with his stepdad but couldn’t afford to divorce him. And then he told me that his stepdad would get drunk and beat him with a stick, but he wasn’t sure if his mom was also getting beaten and that scared him. There was a brief pause before he said “I never told anyone that before…” Then he changed the subject completely.

I must’ve been seventeen or so. It shook me. Like… Obviously I was old enough to know that sort of thing happens, but too sheltered to think it happened to anyone I knew. I told my parents about it– seemed the right thing to do. I don’t know what happened from there. He and I never really spoke of it again. I just looked him up on Facebook, though. Looks like he’s done really well for himself.

A guy shouted “sex with dogs is good for you!” At me after we looked at each other from 50 feet away on the sidewalk.

7 years later and it’s still living in my head

Met this dude in college when he moved into the dorm. Goofy looking redneck kid from the San Antonio area. I’m getting to know him when I notice his Spice Girls cd (this was like 2003), and I commented on it. He then goes into this long story of how he was at the Walmart in San Antonio, looking at the CDs in that store and just happened to have bumped into Ginger Spice who invited his underaged *ss into the tour bus that no one had noticed, and he lost his virginity to all the Spice Girls at once.

My thought was “Thank you for this story, I know instantly that I can never trust or believe anything you ever tell me again.”

It’s been almost 20 years and I still can’t believe that was something he said in the first five minutes of meeting me.

Coworker took out a client for a business lunch at a small town restaurant. He asks the waitress “How are you?” to be polite.

She proceeds to go on a 5 minute spiel about how terrible her ex husband is and how he’s ruining her life and how she feels like crap because of it.

After she finishes, takes their order and leaves the customer says “So you must know her pretty well?”

“Only well enough to say hi in passing.”

“Oh, so then that was just as awkward for you as it was for me then?”

I work at a big company and had to walk from one end to the other at the end of a shift once because I got moved halfway through the day, it was a hot day and a dude slowed down and offered me a lift so of course I hopped in.

3 sentences later I know the dudes missing a testicle

Met an old friends girlfriend one day. Well, he was hardly a friend and more of like a friend of a friend.

I kindly declined. If they asked me today, I’d hop on that faster than a frog onto a Lilly pad

I was temping at an office and the trainer told me about her ex:

“He was cheating on me, not just with one woman but many different women.”

“no it was worse than that…. He filmed himself shagging the women, and then streamed the compilation of his conquests onto our TV, for me to watch”

I was unsure of what to say and after a couple of minutes of me being quiet she then said :

” when it was valentine’s day a few days later, he gave me a present, he let me start unwrapping the present…. In pass the parcel style each layer had a used condom that he’d used to shag the women in his compilation video”

To say I was sat their not knowing what the f*ck to say is an understatement.

This girl started talking to me, and everything was sunshine until she kept going on about how she would plan a murder, and how often she blackmails people.

I promptly ended the conversation and haven’t talked to them since.

Was flying out of China (for Xmas I think?) and an expat guy asked me for a smoke at the airport.

Turns out he was being deported, handcuffed and with armed guards.

He told me it was cos he was a med student and he and his buddies had been stealing pharmaceuticals from the training hospital.

No more med school for him

Just started a new job said good morning to a lad there.

His reply i’ve just found out my lass has been getting back scuttled behind my back.

I didn’t even know his name.

I’m guessing that last one is either from a Scottish person or someone who’s just very creative with language.