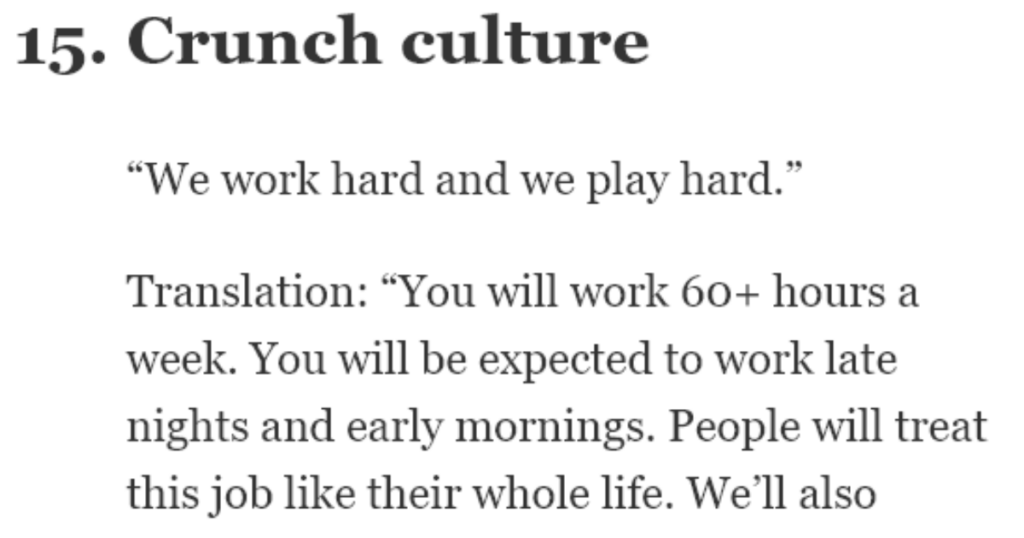 15 Things to Really Watch Out for in a Potential Job

I was once technically hired for a job to which I never showed up.

Between the time when I’d gone in for the interview and been hired and the time I was supposed to show up for my first training shift, I did a little math and realized that in realistic terms, they were probably offering around $10/hour once you factored in all the unpaid prep time and travel. And this was for a fairly specialized, non-entry level job.

Nope’d out of that real quick.

What are subtle red flags at a job interview that say "working here would suck"? from AskReddit

There are of course other red flags to look out for. Here are some warning tales from Reddit.

Was interviewed by a Senior programmer and the department head.

The department head was continuously making condescending remarks towards the other interviewer.

2. Tricking people into training their replacements

I had an interview once, the owner of the company told me he was going to hire me, let the man in the office train me, then fire that man once I was up to speed.

He also told me that sometimes employees have to hold their paycheck. And the final capper, (not that I needed it, I had already decided not to work for him) was he told me I looked like his nephew. I am female.

I had a job interview with two people asking questions. One of them brought questions for the wrong position.

Things I found out later:

The person on the IT team who had been with the company longest had been there just under a year.

Their turnover was higher than McDonald’s – over 50% turnover annually. They had a goal to get it down to 40%.

Bonuses only get paid one year after you’ve been there… for a full calendar year, that only starts counting on January 1st. If you get hired January second 2020, you wouldn’t get your first bonus until 2022.

They had tracking software for your every keystroke, idle time, programs you were active in. They would question idle time, which meant people on the phone with clients would be questioned often because their computers would be idle.

There was a lot going wrong but the interview slip up wasn’t enough to really give it away in time. Suffice it to say they didn’t meet their turnover reduction goal.

“Yea, everyone here is new, but it’s totally because of covid”

“The boss doesn’t like people going out to get lunch because they’re afraid you’ll never come back, so being your own lunch”

“You’ll get weird looks if you leave on time”. It was a chinese owned company with heavy chinese work culture influence so you were expected to stay overtime all week.

Also “the people here are nice but it’s pretty stressful”.

Eta: also was told by my trainer “you want to know the best advice I can give you? Find another job”. This was like…my 2nd week in.

This actually happened to me:

Interviewer: Do you have any questions for us?

Me: what is a challenge this department has recently faced?

6. Cramming multiple jobs into one person

I didn’t know it at the time, but “you’ll be wearing many hats” was a sign that they were going to give me the work of four positions and the wage of one.

I didn’t last a year there before I left and now I won’t even finish reading job ads that include that line.

I once showed up for an interview and the manager wasn’t there that day. No one called me to let me know.

The assistant manager was not apologetic for the scheduling issue at all. She was literally just like “oh, she’s not here today” in a tone that suggested I should somehow already know that. She said they would call me to reschedule some time the next week. I told her I was currently unavailable M-W but could come in any time Th-F. She said if I couldn’t make time for the interview, I probably wouldn’t be a good fit. I said okay, and went on to my other interviews and ending up working elsewhere.

You’d think that would be the end of it, but both the manager and the assistant manager badmouthed me to a few other people in the industry, including one of my friends.

Hello? I made time for an interview. You disrespected me by not calling me to let me know it was canceled. I gave you the times I was available to reschedule, and that was disrespectful somehow?

When you ask, “what do you like about working here” and the interviewer talks about the location of the job (“it’s a great place to live!”) instead of the actual job.

At my last place of work, the person interviewing me had a printed cartoon on their wall of someone who looked like a bomb had blown up in their face, with the caption “I spoke with ‘boss’ name’ about it.. I guess we’re still doing it”.

That wasn’t subtle at all, but I ignored it. The boss was an absolute tyrant who wouldn’t listen to her staff, consider changing her mind about anything, or let people do the work they were best suited to do. She wouldn’t show up for weeks at a time. The job itself was decent, but she was the worst boss I’ve ever had.

I was once told “Sometimes the hourly workers go on strike and they lock us in to keep the production line running, but management brings us steaks and we have an informal agreement with the unions so you can cross the picket lines once a week to visit your wife.”

“We don’t like ‘clockwatchers’ here. We expect everyone to be committed.”

I once interviewed for a job wherein the interviewer actually directly told me that the job was extremely stressful and they’d had a slew of new hires quit within a month or two. (The job was at a psychiatric hospital). I thanked her for being honest with me and said that I was not interested. As she was walking me out, she leaned in and said, “you’re doing the right thing. Our last hire quit because he said he was having palpitations all the time here and was worried he would have a heart attack.”

About 3 years later, at another company, I saw one of the women who had interviewed me. She worked in a totally different position in a totally different setting. She said that the other woman who had interviewed me, the one who gave me the warning actually DID suffer a heart attack! She survived, and she stopped working there. I was so thankful she warned me. Most interviewers wouldn’t do that.

13. Beating around the bush

You get hinted at stuff or they “beat around the bush” on scheduling explanation.

Here they like to hire “part time” then schedule you 39.5 hours (or 30 minutes before full time) to avoid paying insurance and such.

I was told we want long term employment. Don’t just leave after 5-6 years. Ok. What do you pay, and what about raises? His response. $12 an hour. 3-4% increases every year. Nope. Told him I’m all set.

This was an armored truck service. I had to carry my gun and wear a vest. Which they did offer to pay for, they just took it out of your pay. $600 for handgun $400 for vest. (You had to possess a permit to carry prior to applying)

I went back to Private EMS. Same pay, but I didn’t have to protect other people’s money with my life for peanuts.

“We work hard and we play hard.”

Translation: “You will work 60+ hours a week.

You will be expected to work late nights and early mornings.

People will treat this job like their whole life.

It may look like a decent salary but when you back it out to hourly it’s not even remotely competitive with industry standard.

But we have kegs and a ping pong table.”

Also, if everyone that interviews you has been there less than two years, it’s a sign that they can’t retain good employees.

So, yanno. Avoid all that.