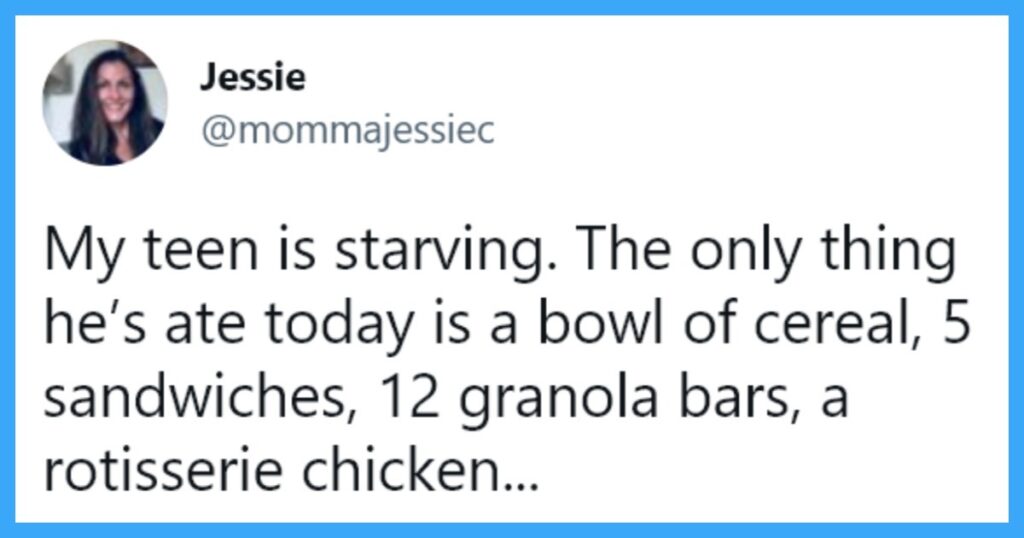 Ah, to be a teenager. To be all lanky bones and emotions. When every experience was new, and yet you felt kind of done with all of it. As though we were in a hurry to get jaded, having no idea what was really ahead.

It’s a strange little stretch of life, and, in truth, none of us should be held too heavily accountable for our embarrassing behavior during it.

But that doesn’t mean that well-meaning and frustrated parents can’t vent a little. Especially if they can be clever about it, like these folks on Twitter.

There’s some food for thought.

Having a teenager is like living in a haunted house: every now and then you'll see a figure in the corner of your eye, hear moaning, and then a door slams.

My oh my how the tables have turned…

My teenage daughter just walked in my room and said, “Mom, if you take my hairbrush can you please remember to put it back?”.

Even those without souls dare not tread here.

You think your kid's room is bad? I watched our Roomba go in the doorway of my teen's room – looked both ways, and turned right back around and left.

Get a battery bank, yo.

I don't care how many degrees you have, nothing prepares you for a teen who finds their phone didn’t charge overnight.

That’s how you speak teen. Just add that extra little gasp to the end of everything.

One thing I learned from having a teen girl is that now I know that “No” is a 2 syllable word.

Can anyone recommend a good wine that pairs well with a teenager's shitty attitude?

Until you have to learn to keep your own calendar, you just don’t think about this stuff.

Stay tuned for my next book all about raising a teenager that will be entitled, "I don't know what time it starts or where I'm going or who's going to be there and I'm annoyed you're so concerned over minor details".

Don’t take a picture of me, I’m very busy taking pictures of myself to post.

We are only a few months in, but I think having a teenager is fun as he*k. pic.twitter.com/K7BqZ75lzv

Imagine having a funny famous dad and still being like “lame.”

Having a 15 year old son has really turned me into a boring asshole, apparently

What is it you’re up to, exactly?

My teen has been doing chores since i got home. Pulled weeds, mowed the yard, took out the garbage.

And any seasoned parent knows that I’m more suspicious than grateful. pic.twitter.com/EFMNS5f6WH

My teen is starving. The only thing he’s ate today is a bowl of cereal, 5 sandwiches, 12 granola bars, a rotisserie chicken…

He’s trying to share his passions. His dumb, nonsense passions.

Why has my teen son spent the last hour explaining to me what the Enderman from mine craft is? I am trying so hard to be nice but I think I am developing an eye twitch… pic.twitter.com/NErMwjX8NT

Oh no they didn’t.

My teenager thinks we live in a hotel now! pic.twitter.com/tsK48qt3VU

Teens. Can’t live with ’em, can’t legally kick them out of the house.