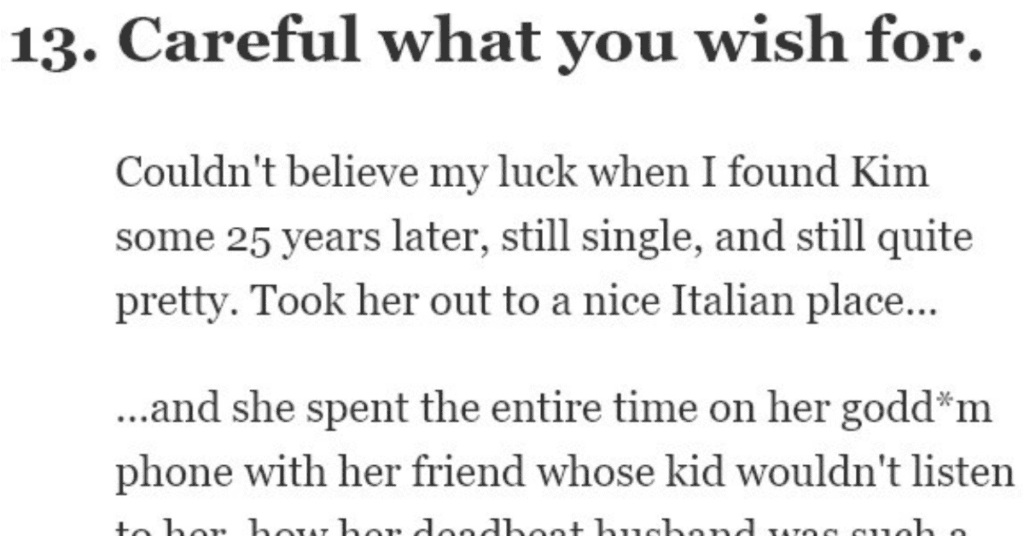 15 True Stories About Getting Over a Crush

To quote The Ugly One from the immortal Teen Girl Squad, “I have a crush on every boy.”

But what happens when none of those crushes crush back?

What helped you get over a crush you had for years? from AskReddit

Here are some true tales of getting over that crush, courtesy of Reddit.

One day I saw her across the quad. I waved and she stopped walking and just stood there. I walked towards her and realised that she wasn’t walking towards me.

Then I realised she’d never walked towards me, never sought me out, never put effort into our friendship, let alone anything else our relationship might develop into.

It took a bit to process, but that was the moment that helped me break free.

So I got into this girl in middle school. I’ve had a mad crush on her for five, long f*cking years. The reason why I didn’t confess was that I was the rejected kid, zero friends and a weirdo and she on the other hand was popular, smart and intelligent. So I always admired her from the sidelines, under the radar and she was completely unknown of my existence.

In High school I made a few friends, who told me to stop being a wimp and confess. So I walked up to her one day in recess and confessed. She made a disgusted face and said that no way in hell she’d be with me and she was in a relationship anyways. I walked away disappointed in myself and feeling real down.

Then a few minutes later her boyfriend came up to me, he said that he was listening from a distance and said he had chewed her out for her reaction. I know that I shouldn’t have taken her seriously but I actually felt low for a month. This guy approached me every day, asked how I was doing. Later on we made best friends. Later on the girl dumped him and he told me all that was wrong about her and how she was a complete jerk and I had dodged a bullet.

There is always a bigger crush

I used to see him everyday at work and hang out after work. Then I got a new job, we didn’t catch up after work so much. And the crush fell away.

Also everyone at work used to joke about us being a couple and how he was in love with me. I wonder if I leaned in to that thinking? And built the crush? Like would I have thought about him in “that way” if no one had put the idea in my head he was obviously in love with me?

I asked her out. She said no. Ended up becoming friends.

Still don’t recall how or when exactly i got over her, i guess hanging out with her over the years made me realize that being friends is better than being together.

She’s a wonderful friend, though she still made fun of me for asking her out that time.

Telling her how I feel. Not in a “be my girlfriend” sense more in a “this thing is bothering me and I need to talk about it” way.

Things got weird between us for about half a week. She is still my best friend but after confessing, the romantic feelings for her quickly faded away.

It feels better this way.

You have to accept it. Don’t obsess over them, but don’t push the thought of them away so much that you can’t process it. Allow yourself to come to terms with it, accept it for whatever it is, and realize what you need to do to move forward.

Everyone is different and every situation is different, but I believe the first step is acknowledgement and acceptance.

She had a shrine to a certain Austrian art school reject, pretty big deal breaker.

I still think about her sometimes, 25 years later.

I think some time during our teen and early 20s the feelings were mutual, but timing was always off. So, I wrote him a Farewell letter, apologising for growing apart and told him I’ll always love him. Wished him the best and left it at that.

I don’t know if he ever received the message, but it gave me the necessary closure to move on with my life, and remember us during the happier times we had.

Seeing them make awful life choices that stressed their partner out and realizing if I had made a move years ago I would be the one picking up the pieces.

13. Careful what you wish for

Couldn’t believe my luck when I found Kim some 25 years later, still single, and still quite pretty. Took her out to a nice Italian place…

…and she spent the entire time on her godd*m phone with her stupid friend whose kid wouldn’t listen to her, how her deadbeat husband was such a loser, how men in general sucked…

I finished dinner, dessert, drink, then another drink, then paid the bill. When I got up to leave, she still remained on that 90+ minute phone conversation, but held up her index finger, as if asking me to wait just one more minute.

Sometimes the real blessing is not getting exactly what you want.

I had the biggest crush ever. He was a really close friend, and we had an amazing friendship that made me doubt he reciprocated my feelings. After my long term relationship finished, I just decided to confess my feelings, because I didn’t feel like i could move on if I didn’t.

We dated for about six months, and then separated amicably. We were a better match on paper than IRL. Talking to my crush, and being honest about my feelings helped me not idealise them, and eventually I came to terms with the fact that we were not a good couple.

My advice is, don’t be scared to talk about your crush with your crush, and avoid making them more perfect in your mind, they are still human. Be honest, be kind, and be respectful of any outcome

Getting to know her lol

Personally, I suggest just letting yourself fall into a pit of despair until it overtakes your entire personality. Works well for me!

How have you gotten over a big crush?