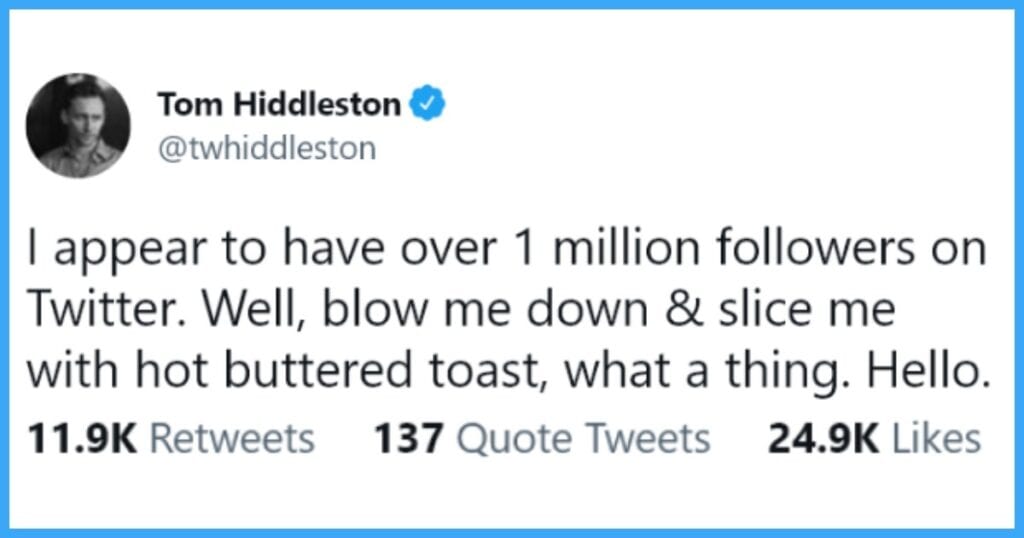 15 Tweets for Anyone Who Can’t Get Enough Tom Hiddleston

Not to date this post too much, but at the time of writing I’m smack dab in the long waiting period between Loki Season 1 and the announced Loki Season 2 and I’m just about angry about it. I gotta know what happens next!

And a large part of exactly why that’s so urgently important is the show’s star, Tom Hiddleston. It’s interesting to reflect on the fact that back in the day, there were headlines about Marvel taking a “gamble” casting “unknown actors” in the upcoming Thor project. Of course, both Hiddleston and Hemsworth had been building careers up to that point, but I think it’s safe to say that “gamble” took off, as they are now both – maybe especially Hiddleston – overwhelmingly beloved celebrities.

So for anyone who just can’t get enough, here are a few great tweets from his collection.

How cool must it be to work on Broadway?

Back before the show had premiered.

“On we go.” I like that outlook quite a lot.

In other news, I turned 36 last week. Huge thanks to everyone who said hello. I went for a run in the rain, had a piece of cake. On we go.

Really a sort of hidden gem of a movie.

Only the top 1% of pictures are this cool.

Look who I ran into backstage @jimmykimmel. #FeelTheBern pic.twitter.com/8uW1Lks6iQ

Remember when that was all the rage? Some jiggery pokery indeed.

Not quite sure why my #IceBucketChallenge has posted again. Some jiggery pokery with that strange beast, the internet. Anyway – have fun.

8. Stand in the light

I Saw The Light. pic.twitter.com/LBSiP5tBVb

This is when RDJ finally decided to join Twitter.

6. A breath of freedom

He sure does seem to love running.

Run round Regent's Park in the sunshine this morning. A breath of freedom. Feeling so grateful for so many things. What an amazing life.

5. The one million mark

I appear to have over 1 million followers on Twitter. Well, blow me down & slice me with hot buttered toast, what a thing. Hello.

What a beautiful place.

Make sure you tell the people you love that you love them. Loudly and often. You never know when it might be too late. #LoveYourLife

Come on guys. Nicki Minaj is pulpy and hilarious.

And at the time of writing, it’s expanded past four.

Lastly, 3m followers! My goodness. Thank you for listening to my ramblings and coming along for the ride.

Thanks for all the great memories, Tom! Here’s to many more!