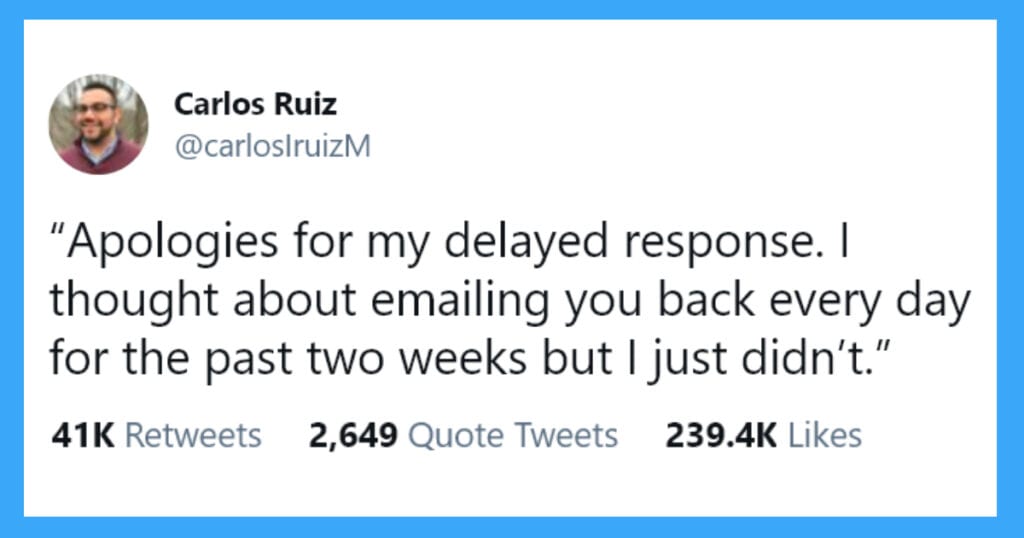 15 Tweets That Are Absolutely Beyond Relatable

In a lot of ways, the internet has made the world a significantly smaller place.

Because when you scroll through the internet, looking at the casual thoughts of strangers, you quickly see how similar they are to your own – even the small stuff. Maybe especially the small stuff.

The stuff that’s just oddly beyond relatable. Like this.

15. Would you look at the time

No seriously, would you?

How dare anyone else in this home have thoughts or needs.

me: i should get in the shower

*2 hours later someone else starts the shower*

me: oh my god fuck you i was JUST about to get in there

I don’t need everyone to trust them, I just need us all to finally learn how to USE THEM.

My trust issues so bad i don’t even trust these: pic.twitter.com/zshC7mA7yv

We must test the pinch.

If you don’t click these bad boys a couple times before you use them, I can’t trust you!! pic.twitter.com/9Qv1IAR6pW

Gotta give that ol’ grey matter a moment to catch up.

Sometimes i say “huh?” then answer the question before the person even repeats themselves. Im not deaf, my brain just be laggin like a 2005 Dell desktop x

What exactly do you think you’re doing?

Me: [finally gets eight hours of sleep]
My neck: yeah but u did it wrong lol

I try to do this but spend all that time worrying about how little time I have instead.

“Then I saw her face / now I’mma beleaguered…”

When you Google the lyrics of a song and realise you've been singing nonsense for the past 6 months.

But then, your trash version is more lit than the original. pic.twitter.com/YCXeAmbv5O

7. The price you pay

And I’d have gotten away with it too, if it weren’t for that meddling me.

Have you ever been too nice and ended up in a situation that could’ve been avoided if only you had just been an asshole?

As though your name isn’t on it.

Who else did this when submitting class work in school😂😂 pic.twitter.com/NcxncADzOr

Then it comes time to move and there’s not a single box in your entire house.

One thing no one ever talks about being an adult is how much time you debate yourself on keeping a cardboard box because it's, like, a really good box.

Yes and we all definitely go to the dentist regularly and never put it off…right?

Is it a universal thing to brush your teeth an hour before the dentist to try and hide the prior 6 months of neglect?

You’d better be enjoying yourselves or I will turn this car around.

me checking if everyone else is vibing with the song I put on pic.twitter.com/BagHc6bowQ

I was feeling slightly anxious at the time and decided to neglect all of reality as a result.

“Apologies for my delayed response. I thought about emailing you back every day for the past two weeks but I just didn’t.”

When you’ve done something so much you don’t even need your brain.

Do u ever drive like a solid 5 min while thinking about something incredibly random and stupid then ur like were any of those lights I passed green how did I get here WTF ??

It’s a small world after all.

Which one do you feel the hardest?