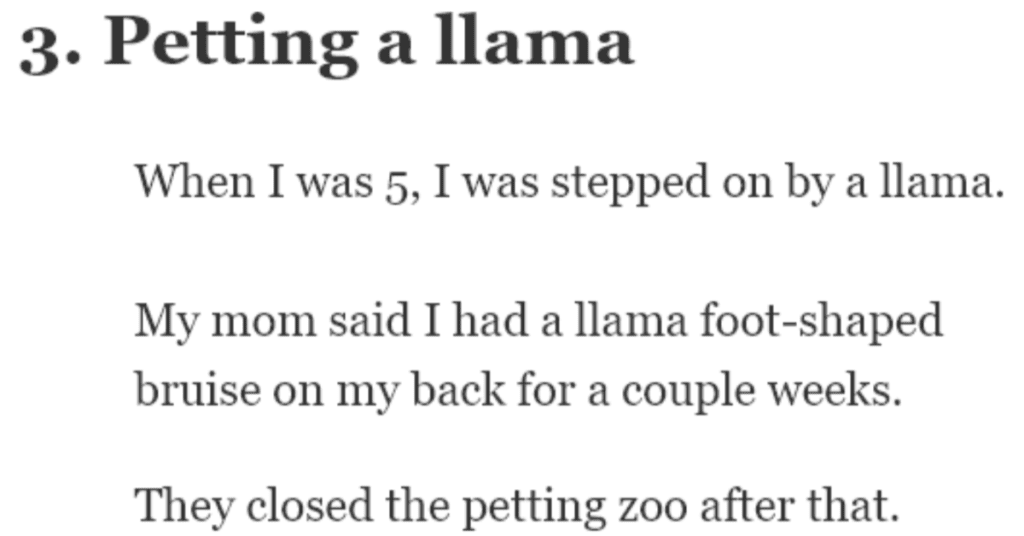 15 Ways that You Can Get Seriously Injured, Apparently

They say that every scar tells a story. But I think when they say things like that, they’re mostly referring to cool scars will cool stories, not my dumb a** burning my arm trying to make a frozen pizza for the fourth time this year.

Not all injuries are glorious. Some are downright dumbfounding. Just take this thread on Reddit, for example.

What is the stupidest injury you’ve ever gotten? from AskReddit

You ready? Things are about to get painful in here. Let’s look at a few ways you can (apparently) really hurt yourself.

There’s a tool called a hay hook. It looks like a big Captain Hook hand, except it’s welded to a metal bar.

You stab it into small bales of hay to make them easier to drag around.

One day I missed the hay and hit my knee.

I sneezed it dislodged a herniated disc causing me to collapse and rupturing my vertebrae crippling me permanently.

so yeah I got crippled with a sneeze

My mom said I had a llama foot-shaped bruise on my back for a couple weeks.

They closed the petting zoo after that. When it reopened, they no longer allowed people inside the animal pens.

When I was 6 my forehead was really itchy but it was one of those deep itches that you couldn’t really scratch out.

So my bright 6 year old brain told me to get into an all fours position and try rubbing my forehead into the carpet… well I did that and ended up taking a small layer of skin off that took ages to heal completely.

Watching American football as a kid.

My dad missed the play where one of the wide receivers injured his ankle.

This wasn’t me, but I was playing basketball with some friends one day and the topic of Derrick Rose’s ACL tear came up.

Friend of mine was confused how he could have gotten hurt on that play, so he tried to mimic exactly what Rose did to see if he could feel any pressure in his knee.

…he tore his meniscus.

I had lost about 30 pounds, and my belt was getting too big. Most people would say “oh, time to buy a new belt!” The craftier of us might say “time to get out my leather punch!” I say “time to dig a hole in the belt with my folding pocket knife!”

It folded in on itself while I was digging a new hole in the leather and cut my thumb to the bone, and had to go to urgent care to get it stitched up.

My wife bought me a leather punching tool for Christmas that year.

I decided it would be quicker to walk down an incline of tennis-ball-sized rocks in flip flops with my hands full than walk around on the pavement.

I was right – I descended quickly!

Severed 3 tendons in my left hand while slicing a bagel.

Basic tendon repair went over well, but my middle finger got infected. They had to put a tendon from my leg into my hand. 3 surgeries over a f**king bagel.

Holy s**t this blew up. Everyone keeps asking me if I ate the bloody bagel, no I didn’t.

On vacation in Florida. I had forgotten my sandals at home and didn’t want to wear shoes down to the beach. Figured I’d buy a pair later; and was already the last of our group to arrive. So I walked down barefoot.

The boardwalk ended up being a lot longer than it looked due to a twist and was made out of some odd almost plastic composite material instead of wood.

I have a very high pain tolerance. When I finally reached sand my feet went from mildly uncomfortable to on fire. I had to be carried back off the beach.

2nd degree burns on the entirety of both soles of my feet. I couldn’t walk for a week. I still openly tell people it’s one of the dumbest things I’ve ever done.

Man is that a high bar for me.

I think this time I’ll go with the time I broke my arm because I was running and my feet got tangled in my parachute pants.

Friend was chasing me and I tripped and fell into a hallway door and sliced my head open.

I hit the door so hard my Pokémon blue version flew out of my back pockets along with everything else in my pants.

When the janitors cleaned up the mess they brought me back a purple cartridge.

I was trying to reposition a tube for a ride at Water World (right before going down it), slipped on the first step and sprained my ankle.

By the time I got done with the ride it looked like a baseball in place of my ankle. Second ride of the day.

Took a golf ball to the face. We were launching it out of one of those giant water balloon launchers.

I pulled back as far as I could and let go, the ball stayed in the pouch and snapped back in my face right below my right eye. We’re talking maybe a half inch from losing my eye.

My zygomatic bone took it all but surprisingly nothing broke. I just sprayed a ton of blood and had a massive black eye that migrated all over my face.

Today I was trying to open a can of stain, the screwdriver slipped, and I stabbed it right into my other hand.

So now I’m staining stuff with a small stab injury on one hand.

I guess the moral of the story is just don’t do anything.

What’s your most dumbfounding injury?