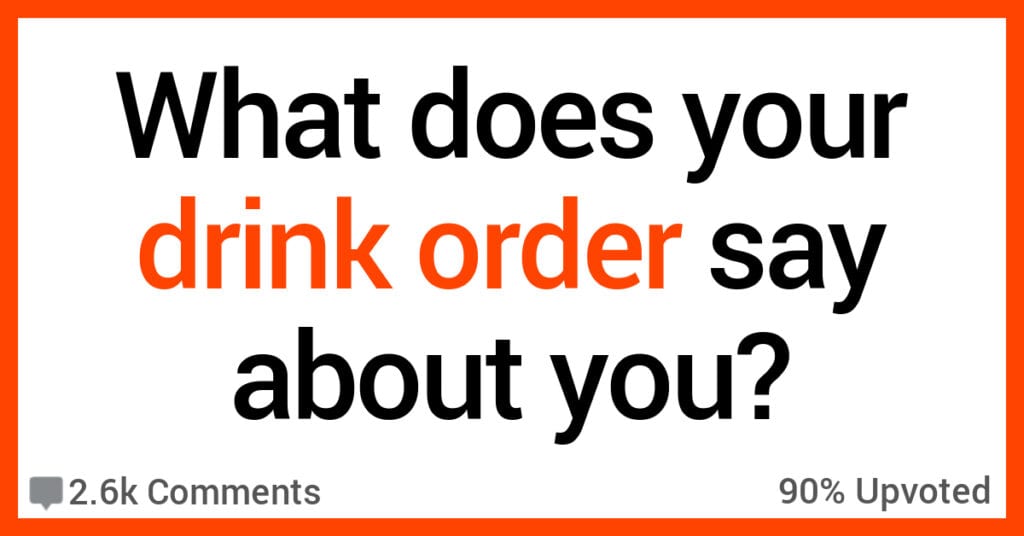 Bartenders Share What Your Drink Order Says About You

What does your drink order say about you?

Little did we know, while we were out there having fun, our friendly bartenders might just have been judging us all along…

Bartenders of reddit : what are the stereotypes that come with specific drinks people order ? from AskReddit

Give us the inside scoop on our pours of choice, Reddit.

Rarely get tips and are almost always asked to “make it strong.”

For the sorority girl who wants to cut calories, then drinks 8 of them and gets blackout pizza from the place next door.

Used to be a bartender in a pub in London. Typical pub, you’re selling a lot of beer, the odd cider or glass of wine.

There was a local gangster type that even the other hard bastards in the pub used to be wary of.

Friendly enough guy, but definitely not someone anyone wanted to be on the wrong side of.

He drank nothing but bright pink Watermelon Bacardi Breezers. Taught me not to judge.

Douchebag flexing cash around random people he barely knows. Will not tip well

Always a lovely bloke though.

the woman who ordered a Lemon Drop is the only person to this day who has screamed at me at work, so I’ll say that’s a drink for high maintenance a**holes

Ordering Manhattans while in nyc because of the novelty, not knowing that it’s mostly bourbon then saying it’s too strong.

Tended bar at a pan-tropical bistro when I was in graduate school.

Naturally, we had a few pre-blended fruity, frozen drinks, which were typically served in a hurricane glass, with garnishes.

One evening a very manly man ordered one, but requested that it not be served in “A f**goty glass.”

I’m going to be loud and obnoxious all night, and my vomit is going to be neon orange when i’ve drank 5 of these.

This person is almost certainly a pain in the a**.

I worked at a bar, bar backing, 10 years ago, when Bacardi’s ad campaign made the mojito popular again, somehow… I mean, it’s a great f**king drink, don’t get me wrong.

Anyway, one of the bartenders was telling me at closing that he hated the f**king drink because process- all the muddling and it sucked when everyone wants a Jack or Bacardi and Coke, gin and tonic, vodka-soda- y’know one step, two part drinks and then you have to stop, muddle, muddle, muddle, muddle, and mix- especially when we would be four deep at the bar, both bar tenders busting a**, I was running ice, washing glasses, and pouring beers, and then someone would order a mojito.

The guy who hated making them would act super excited to make them, pulling out all of the Cocktail lines, flipping bottles, smiling- chatting up the person, it was really disingenuous to me, but really funny, I swear he threw so much hatred into that pestle while muddling the lime and mint… So naturally, after we closed, I’d ask for a mojito.

We turned an outdoor shed into a tiki bar shortly after the smoking ban (WI).

Malibu gave us these little buckets to make fun fruity drinks in as a promotional thing. I was 18 but knew the basics of bartending and 3 couples came in and asked for LIT in those d**n buckets. Of course I screwed up my alcohol portions because the drink is f**king straight booze in a bucket and all 3 couples went inside to complain to my manager about my drink making skills and the prices I charged.

We gave the buckets away to make sandcastles after that. We also had a bartender who refused to make a bloody Mary after 4:00 pm, said it was a day drink.

If you pull up a drink you found on Pinterest and it has 25 steps and is more pretty than tasty, I can tell already you are a future “I want to speak to the manager” type of mom.

As a grown man who orders Shirley Temples I can say the stereotype is usually that I’m joking.

Cheers to you, whatever your drink of choice.

What’s your go to order and why?