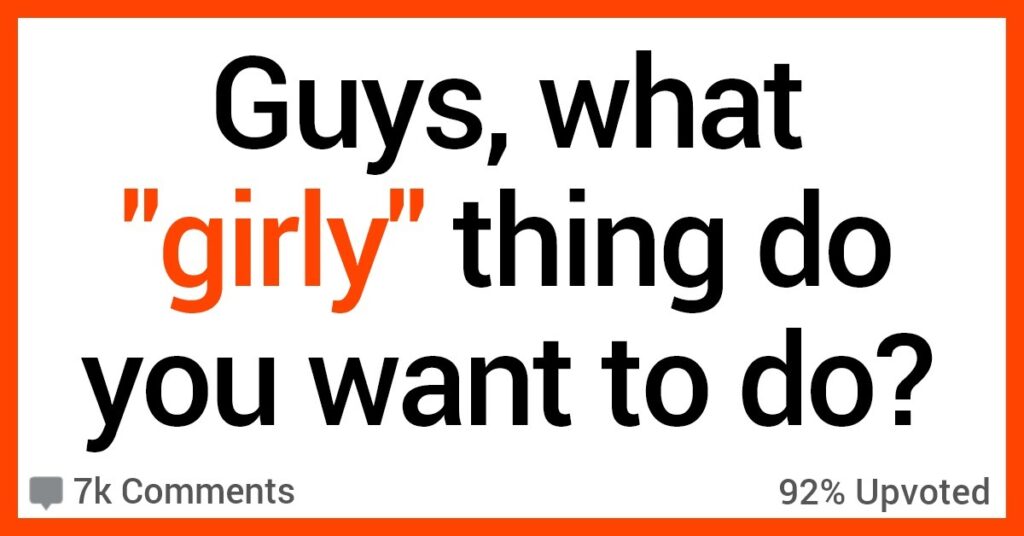 As the poet once said, “Girls just wanna have fun.”

But recent data uncovered by scientists suggests that boys, too, may be fun-inclined.

Boys, if it was considered more universally acceptable, what is a “girly” thing you would do? from AskReddit

What are some guys itching to break free with? Let’s find out.

I’m a guy and it’s kinda been a goal of mine this year to give more compliments to people, especially my guy friends.

I’ve noticed sometimes that if I give a guy some random compliments over the course of a month, his attitude towards me becomes a bit more open and will start complimenting me on random stuff too.

It’s like, everyone has those thoughts of “Huh, John’s hair looks freaking great today”, but a lot of guys won’t say it unless you show them that you are okay with that kind of discourse.

Not a guy, but one time I went to a famous toy store with a guy friend and they had a HUGE dollhouse section.

I was freaking out because I love dollhouses, and my friend’s eyes got really big and he confessed that he had always loved dollhouses but never felt like he was allowed to play with them as a kid.

Bartender chuckled at me a bit when I ordered a liquid marijuana once (it was clearly listed on their drink menu so it wasn’t the name). It’s not my fault that s**t is tasty as f**k.

This was at a work party so of course people are asking what I was drinking. So I tell them, tell them what’s in it, and offer a taste.

20 minutes later, half the dudes there were walking around with their own.

I’m deeply interested in guys who actually do the stuff listed here but I understand why it’s hard to do them for some.

It’s sad that a lot of people are afraid to act on their desires because of the useless judgment.

Be more touchy with people. It’s so crazy seeing girls just touching anyone without it seemingly creepy or gross.

I can’t remember the last time I’ve casually touched someone.

Definitely girls sleepovers, I really like the ongoing vibe that is depicted in a girl sleepover, nothing sexual, just doing some dumb s**t with your gals.

But besides being a “girly” thing that I would totally do, also not being considered a creep just bc of that.

I do whatever I want, real manliness comes from being comfortable enough with your masculinity to know that adopting feminine traits makes you no less of a man,

I’m already into so many “girly” things now from the music I listen to, the movies I watch, etc. I even go to salons to get my hair done and sometimes put on light foundation when I go out especially on dates.

I don’t care if it’s universally acceptable or not anymore. I like it and I don’t give two sh**s about what people think.

If people think that taking a bath is girly, then they need a psychological recalibration.

I am a man, and love a nice bath, and there is nothing feminine about it.

It is soaking in hot water, where you can relax, read a book, listen to music or a podcast, browse Reddit (hi guys) or do whatever you want.

Carry a purse at certain times.

My phone is almost the size of a laptop now, I have probably 200 plastic cards in my wallet, plus keys and anything else. I can barely fit my hands into my pockets somedays.

Sometimes I feel like I should either have a purse or a tool belt on to carry everything around that I need.

Taking care of kids. Some people assume men who like taking care of babies and small children are either girly or ped0s.

I just like children, they’re fun and cute and it’s a powerful experience doing things to positively influence a future adult.

I sew for a living, bake like I was born to do it, and my crochet has such beautiful tension and stitch definition that it makes old ladies weep with jealousy.

I don’t have time to worry about the gendering of the things I love.

As an easily straight passing bisexual I’m here to tell you all to just do these “girly” things because nine times out of ten these days, no one cares, and the people who do usually very easy to roll over.

I mean, my favorite drink is straight whiskey, I ride a motorcycle exclusively, and sometimes I f**k dudes. Everyone I’ve told that to doesn’t care.

If I can literally have s** with a man and the majority of people don’t care, you can order a fruity drink or braid someone’s hair. Don’t be afraid to be yourself.

Life is too short to be too prideful about doing things traditionally considered feminine. And if someone gives you s**t about it, strut your masculine s**t and tell them to eat s**t.

I spent a lot of my life afraid of my feminine side and it’s not worth it. Be you. Do what you like. Be happy, my friends. Life is so much better when you stop caring about what other people think

Obligatory “not a man” comment but guys in the comments here, please don’t be afraid to do things because it’s “girly.”

You only get one chance at life. Why not do things that make you happy?

Gender is a social construct, & you don’t have to abide by its rules. Your happiness is way more important than some unspoken societal rule.

If it feels better to cry, then cry. If you enjoy styling hair, keep doing it. If you like to sew, or you like the color pink, or skirts make you happy, or ANYTHING that’s ruled as “feminine,” embrace it. If anyone has a problem with it, they’re not worth your time.

Your main goal in life should always include happiness, & if people do not want to support whatever happiness you pursue, then they aren’t worth it. Even if they’re family. Even if they’re your best friend. If you can’t get them to understand why happiness is so important, then that’s on them.

Live your best life. Even if it’s more “girly” than expected.

Bottom line: unless you’re in some super backward area where it might literally get you killed – just do the dang thing.

Guys, is there anything “feminine” you wish you felt more free to do? Girls, anything “masculine?”

Give us your thoughts in the comments.